And now, years later, I’ve decided to finally revisit this cherished series from my childhood, in order, continuing with the seventh episode, Little Red Riding Hood, which first aired on November 10, 1983, when I was just about 2 3/4 years old, and was one of my favorite episodes, when I was growing up… 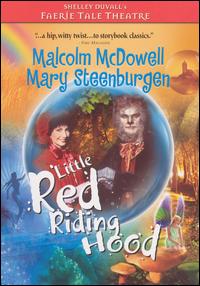 As I said, Little Red Riding Hood was one of the Faerie Tale Theatre episodes I’d watch most frequently as a kid, and even revisiting it again today, I can see why. Although I didn’t consciously realize it back then, I seem to have been most drawn to the episodes that expanded the fairy tales beyond the versions that my family would tell me, because it gave me the opportunity to see new story elements that weren’t there before. Little Red is one of those tales that, narratively, doesn’t have that much to it–not in a negative sense but just in the sense that the plot, even as far as fairy tales go, is particularly streamlined: Little girl goes to visit her granny, meets wolf along the way who encourages her to stray from the path and then runs ahead, devours her granny, then her; a woodsman arrives to save the day; the end. A 50-minute version, therefore, requires some padding.

Faerie Tale Theatre‘s best dramatizations of shorter stories find creative ways to “pad” without feeling like simple padding–in other words, adding elements that actually contribute substantially to the story, from a characterization standpoint, from a thematic standpoint, from a plot standpoint, or some combination of the three. Sleeping Beauty did so through the use of a framing story and some postmodernish storytelling devices, a decision that still feels fresh and different today, yet also not a seamless expansion. In a way, the various interruptions only call further attention to the fact that the original story was so slim–an almost meta sort of acknowledgment. The format doesn’t really benefit or add any further depth to the characters, although it is an entertaining and creative spin on a very famous tale.

Little Red Riding Hood, on the other hand, finds its inspiration in exploring the character of Little Red Riding Hood–here called “Mary,” the same first name as Mary Steenburgen, the actress who portrays her–on a more personal level and does so by rather intriguingly working from the original story’s subtext. Much scholarship on this fairy tale has centered on the wolf as representing the primal sexuality of which this young woman, on the cusp of adolescence, would have just been experiencing her first twinges. In some versions of the tale, the wolf, dressed as the granny, even asks the girl to take her clothes off before getting into bed with him. Faerie Tale Theatre removes that detail but does retain the bed-sharing portion of it. 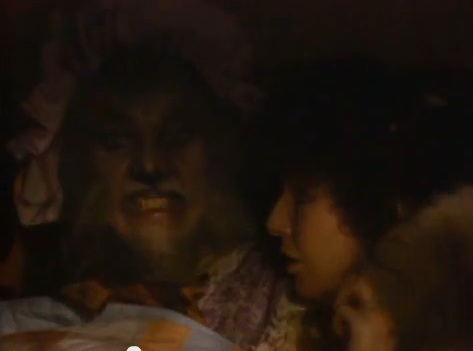 In some ways, the tale could be interpreted as a cautionary one, warning young girls of the dangers of strange men and of giving into one’s desires at too innocent an age, or allowing oneself to be taken advantage of. Some more recent writers, however, perhaps most notably the author, Angela Carter, who was known for her radically reinterpreted, darkly sexual, feminist fairy tales, took a different spin on it, making it instead a story of a young woman learning to take claim of her own darkest sexual desires, and to perhaps even find empowerment in them. Little Red’s song in Stephen Sondheim’s fairy tale musical, Into the Woods, “I Know Things Now,” rides the line between these two seemingly divergent paths, on the one hand making it clear that this girl is not yet ready for adult sexuality–

And he swallowed me down,
Down a dark slimy path
Where lie secrets that I never want to know

–while on the other, making it clear that she is beginning to be intrigued by the concept, in spite of herself:

And he showed me things
Many beautiful things,
That I hadn’t thought to explore.
They were off my path,
So I never had dared.
I had been so careful,
I never had cared.
And he made me feel excited…
Well, excited and scared.
When he said, “Come in!”
With that sickening grin,
How could I know what was in store?
Once his teeth were bared,
Though, I really got scared…
Well, excited and scared…