The real star of the piece, however, is Jean Stapleton, who is an absolute delight as his husky-voiced wife. It’s actually a remarkable performance, full of character-specific quirks such as an eye twitch and squint when she’s thinking. They gave her a bit of ugly-face putty make-up, and she plays it up beautifully, reveling in her grotesqueness.

The Giant’s Wife isn’t the sharpest tack in the pack, but she’s miles ahead of her husband. She also gets some great bits, such as when she tells Jack to hide in the oven, and when he scoffs, she responds that he shouldn’t worry, this isn’t Hansel and Gretel, after all! And the second time, Jack tries to dress up in costume to trick the Giant’s Wife, in a pair of Groucho mustache glasses, she responds, “Ain’t I seen you before?! Yes! Yes! Oh, no, no, the last boy didn’t have those stupid glasses and that fake mustache…” 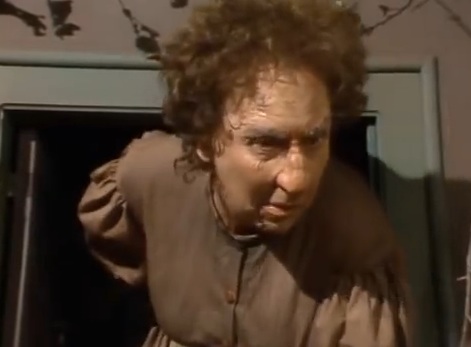 I also appreciate that, as with most Faerie Tale Theatre episodes, they don’t trim anything out of the original story. Many versions of the tale I’ve seen abridge it to Jack only visiting the Kingdom of the Giants once or twice, but Faerie Tale Theatre features all three: once to steal some gold, the second to grab the hen that lays the golden eggs, and the third to nab the singing harp. The hen, incidentally, is a squawky puppet with a Cockney accent, which is all kinds of amazing. To manage the singing harp, on the other hand, they project a woman’s face (Jerry Hall) over the strings, and it’s a little creepy.

But not nearly as creepy as Mark Blankfield as the Fairy. In this version, the mysterious man who buys Jack’s cow in exchange for magic beans, is also a female fairy who guides him along the way. While the idea of a drag queen fairy aiding Jack the Giant Killer might sound kind of wonderful in theory, the execution misses the mark. 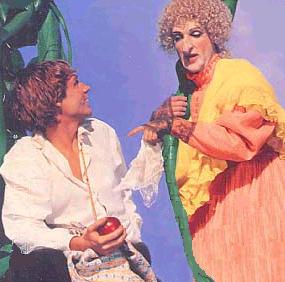 Jack and the Fairy

To begin with, his costume, make-up, and wig make him look like The Chicken Lady from the classic Canadian sketch comedy show, The Kids in the Hall… 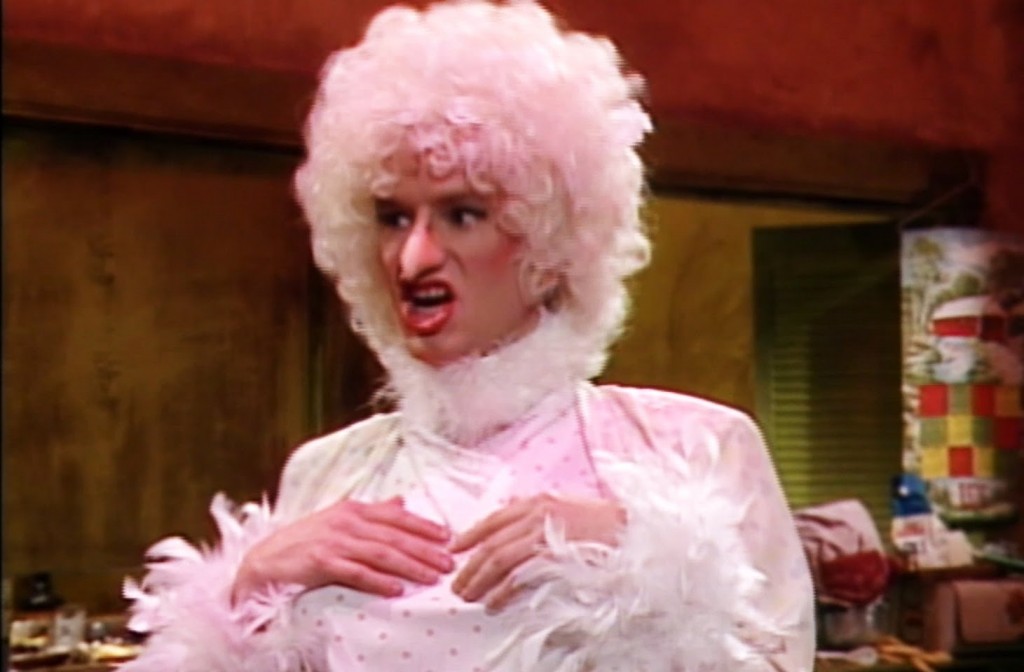 More importantly, though, it’s an extremely awkward, uncomfortable performance. Throughout, he seems very ill at ease both in costume and manner, and the whole thing comes off as distinctly unpleasant. And, given that he appears multiple times in some excruciatingly drawn-out expository scenes, it unfortunately weighs the production down.

I also am not a huge fan of the fact that this is based on the moralized version of the story, first written down in the early 1800s, in which all of Jack’s actions are justified by the revelation that the Giant had actually stolen the castle from Jack’s father, who was its rightful ruler. I like that the original story has some ambiguity as to whether Jack’s actions are noble or not. He is, after all, a thief, albeit one who does so out of desperation due to the dire conditions he’s living under. And the Giant is unequivocally a bad guy. But by retroactively excusing everything Jack does as him simply reclaiming his birthright, it certainly waters down the tale’s edge.

This also, of course, leaves open a number of questions such as how Jack’s mother has no memory of what happened (it seems in this version that it was so traumatic that she simply blocked it?), how Jack and his mother ended up living on Earth rather than in the clouds (never answered), and why his family would have had a castle built for giants. 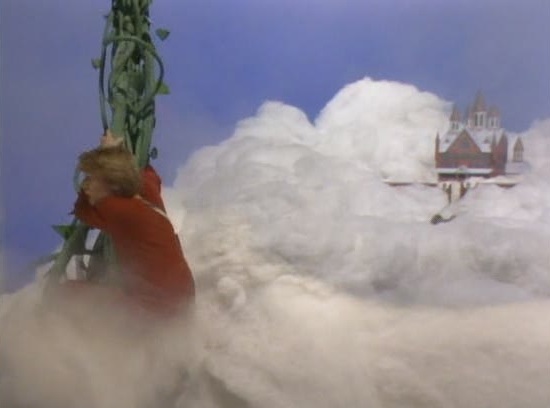 Faerie Tale Theatre actually does work this detail in by having the doorway be too short for the Giant’s wife, so whenever she lets Jack in, she has to duck. On the other hand, the furniture and most things in the house actually seem to be the right size for them, so…handwave, handwave, handwave.

Also, the Giant and Jack never end up interacting until the very end of the story…and while this is accurate as to the original tale, in which each of the first two times, Jack sneaks out with one of the items while the Giant is sleeping, it doesn’t make for a very interesting dramatic conflict. Even when we get to the final time, they don’t so much as interact as the Giant finally spots him and chases him down the beanstalk, at which point Jack and his mother chop it down, so we have a “hero vs. villain” showdown where the hero and villain never actually have much of a showdown. Other filmed versions of the story have resolved this issue by weaving in some physical fighting between the two, Jack darting away, and in and out, as the Giant tries to attack, and so forth, or having the Giant discover Jack on previous visits, and interact with/try to catch him before he gets away each time, which makes for a much more dynamic experience.

All in all, not a bad forty-five minutes, and one that certainly has some entertaining performances, nostalgic curiosities, and very funny elements, but not one that shows off Faerie Tale Theatre at the height of its imaginative powers.