And now, years later, I’ve decided to finally revisit this cherished series from my childhood, in order, continuing with the fourth episode, The Nightingale, which first aired on May 10, 1983, when I was just over 2 years old… 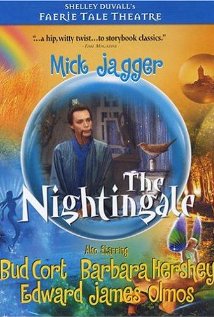 It’s impossible to view The Nightingale today without addressing the yellowface issue. Unfortunately, in an episode set in China and filled with exclusively Chinese characters, nearly all of the performers are Caucasian, other than a few of the emperor’s subjects. Now, there are far worse cases of this throughout film and pop cultural history, and at least from my non-Asian perspective, there are a number of elements that make this a less egregious case than, for example, the recent, controversial episode of How I Met Your Mother, including:

(a) the fact that none of the actors put on ridiculously offensive or exaggerated accents or assume any stereotypical traits, for comedic purposes or otherwise;

(b) that the makeup is generally restrained, with, more often than not, only the slightest hint of mascara around the eyes to indicate the characters’ heritage;

(c) that Shelley Duvall and the entire production team seem to have a great deal of respect for the culture that they are portraying, and while this comes down to personal reaction, neither the episode nor the costumes seem fetishistic nor overly cultural appropriation-y (it doesn’t have that “ooh, look at this exotic, other culture!” aura about it);

and (d) that, although it’s set in China (here called Cathay, an anglicized version of the Chinese word for “China”) and might seem like an authentic Chinese fairy tale, it was actually written by the Danish author, Hans Christian Andersen. The fact that the white actors are performing in a white male author’s approximation of Asian culture makes that aspect seem ever so slightly more palatable.

With all of that said, again, I’m not Asian and can’t speak for how an Asian viewer might feel about this episode’s portrayal of Asian people, but I do think that at least their intentions with The Nightingale were completely pure and respectful, and that, if you can look past the fact that spirit-gumming a Fu Manchu mustache to Mick Jagger’s face so that he can play a Chinese emperor is more than slightly problematic, and chalk it up to the time period–and also take a moment to appreciate how remarkable it is that Mick Jagger starring as a Chinese emperor in a episode of a children’s fairy tale series is a thing that actually happened–you will find a lovely, lyrical portrayal of this classic story.