Faerie Tale Theatre 1.01: “The Tale of the Frog Prince”

And now, years later, I’ve decided to finally revisit this cherished series from my childhood, in order, beginning now with the very first episode, The Tale of the Frog Prince, which first aired on September 11, 1982, when I was 1 1/2 years old, and was one of my favorite installments, when I was growing up… 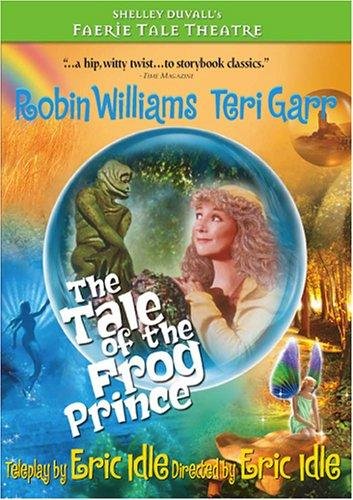 “The Tale of the Frog Prince”

Now, one’s personal reaction to this first episode of Faerie Tale Theatre will rely upon a number of factors:

(a) one’s feelings towards Robin Williams;

(b) one’s ability to enjoy what at the time were cutting-edge special video effects/sets/costumes that now look more dated than old Doctor Who;

As far as the first, I was a big Robin Williams fan as a kid. I’m a bit less so today, however it’s hard to deny that the man is enormously talented, if often overly muggy when not reined in properly. There are a few moments where his schtick goes a bit too far in this show, where he stops seeming like the frog prince–which is, naturally, the role he plays in this episode–and more just Robin Williams in a frog suit. And while Robin Williams is pretty much always Robin Williams to some extent, that works in some iconic roles such as the extremely and deliberately showbizzy Genie in Disney’s Aladdin in a way that it doesn’t quite here. It makes sense for an all-powerful genie to be a larger-than-life (and even a bit hammy) showman, but the frog…not so much, and he sometimes crosses the line into obnoxiousness. We’re supposed to be on the side of the frog, not the vain princess–played by Teri Garr–but there are a few times here where I sympathized with her desire to throw him out a window. But only slightly.

Other than that, the dated effects and the slower pacing are all part and parcel with early 1980s television, and while I have no idea how a child today, used to flashier, punchier visuals, might react, the modest production values here actually contribute to the tone. There’s something rather charming, ethereal, and out-of-time about the entire thing, as if we’re watching a bunch of famous people getting together to put on a production for children in a small theatre–which I guess is the point. There are a lot of modern, anachronistic humor and attitudes sprinkled throughout the episode, but it is done in such a straightforward manner that it never feels jarring.