Kate Griffin’s A Madness of Angels, or The Resurrection of Matthew Swift is not only great–it is fantastically, awe-inspiringly, shout-it-to-the-rooftops-ingly so. A Madness of Angels is the sort of novel that makes you want to grab everyone you know and convince them to read it but also leaves you at a loss for how to describe why they should read it, for fear of giving away and thereby lessening its secrets and delights. 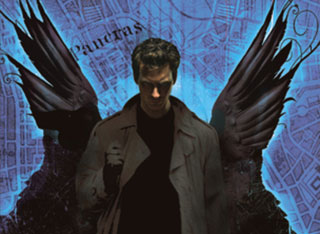 "A Madness of Angels" Cover

Griffin is working with a rather unique system of magic here that, in many ways, seems literal and deceptively simple.  Often, urban fantasy means that magical and supernatural creatures associated with nature and the wild–such as faeries, sprites, werewolves, vampires, etc.–have been transplanted into a modern-day city setting. We see this in series such as Jim Butcher’s The Dresden Files and Laurell K. Hamilton’s Anita Blake: Vampire Hunter. In Matthew Swift’s world, however, the fantasy springs from the urban setting, rather than simply hiding within it. Griffin’s definition of urban magic is that the pulse, the rhythm, the heartbeat of the city and the millions of people living, working, traveling, eating, drinking, dancing, fucking within it becomes a palpable form of magic itself. A sorcerer is someone who can tap into these forces–which are every bit as primal as those found in nature–and manipulate them by working within their rules. For example, a potent spell can be cast in the London Underground by reciting the disclaimer text typed on the back of an Oyster card. And, yes, the city has within it trolls and demons and faeries and all the usual fantasy suspects, but it also has its own spirits–The Bag Lady, The Beggar King–formed from the hopes, dreams, fears, thoughts, and lives of the millions of people existing within it, and hideous monsters such as litterbugs, made from the trash and detritus they leave behind.

A Madness of Angel‘s plot can be summed up succinctly by its alternate title, The Resurrection of Matthew Swift. Matthew Swift is a powerful sorcerer who, two years after his grisly murder–which seemed to occur at the behest of his former master, Robert Bakker–finds himself very much alive again and seemingly merged with another mysterious entity referred to as the blue electric angels. Swift soon begins a quest to bring down Bakker and his dangerous network of magicians, necromancers, apprentices, and more, an arc that passingly resembles Quentin Tarrantino’s Kill Bill, with a recently resurrected protagonist weakening his enemy’s defenses by pursuing and stopping the man’s underlings, one by one.

More than that, however, A Madness of Angels is a fascinating sojourn into the mind of a thoroughly unique protagonist, written in an evocative, searingly poetic style that manages to capture the stream-of-consciousness of a man who has become much more. And Swift is not just the sum of himself and the blue electric angels, but of the entirety of London. He can view and feel the city from the perspective of the pigeons flying above, the rats crawling below, and can peer into the stuff that makes up the city–not just the buildings, but the air, the light, the shadows, the emotions swirling within and around each person. When he speaks, he uses “I” and “we” interchangeably. I are we, and we are he, and he is Matthew Swift and the blue electric angels and the city, all rolled up into one. Kate Griffin has a strong command of character and a beautiful command of the English language. We aren’t just reading about the city and its magic–we hear it, we smell it, we taste it.

A Madness of Angels is a magical meditation on what it is to be human, the impact that we have on our environments and that our environments have on us, on how our shared histories and lives can create ripples in time and space, and of the consequences of becoming lost in all-enveloping power. It is also a remarkably clever, exceedingly entertaining trip through the magical underside of London, seen through a truly singular pair of eyes. 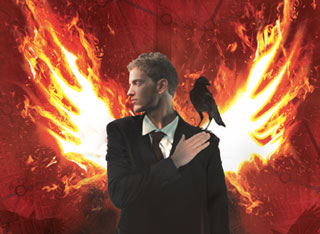 The second novel in the series, The Midnight Mayor, or The Inauguration of Matthew Swift, is even better.  It builds beautifully from the characters, narrative structures and framework set up in A Madness of Angels and takes the story to even more astonishing heights and often in the most simple and straightforward of ways.  Griffin has a knack for finding the delicate magic in the everyday, making the mundane wondrous, and weaving powerful spells from the most seemingly innocuous of sources.

It also follows A Madness of Angel‘s lead in being a satisfying story in its own right, rather than just a piece of a much larger puzzle. At the start of The Midnight Mayor, one might even suspect that it will be a fully standalone tale, a new adventure informed by the events of the first book but generally its own story. As it proceeds, however, one comes to realize that it is the next natural progression of the themes and philosophies Griffin set forth in the first, and moreover, that is not just a sequel but a crucial part of the overall, non-traditional Hero’s Journey on which Matthew Swift is embarking upon, even though he doesn’t quite realize it in the moment.

In A Madness of Angels, Matthew Swift performed a number of actions, the full impact of which he might not have fully understood at the time. In The Midnight Mayor, unexpected consequences arise–most of which are only indirectly related, yet still inextricably woven to the vast tapestry that makes up London, Matthew Swift, the blue electric angels, and all–which further strengthen the series’ central City-Life-as-Magic theme and Matthew as a character. The book’s main plot, you see, revolves around the impending destruction of London. All of the city’s magical defenses mysteriously fail–the Tower of London’s ravens die, the London Stone breaks, the cryptic phrase “Give Me Back My Hat!” begins appearing in graffiti all over the city, and the Midnight Mayor, protector of the city’s magic is assassinated and his position, as one might have gleaned from the subtitle, handed to an unsuspecting Matthew Swift.

If A Madness of Angels is an exploration of London as a magical entity, The Midnight Mayor explores its people and the cost of living in a city that could most literally swallow you alive. It is a novel about causality and how the tiniest ripple can affect millions, on an epic scale. I am we, and we are everybody. Even though the plot may initially seem to not be as personal a quest for Matthew as that of the first, the differentiation between personal and universal evaporates as the plot builds. In “No One is Alone,” Stephen Sondheim’s famous song from his fairy tale musical, Into the Woods, he writes, “People make mistakes,/ Holding to their own,/Thinking they’re alone…/Witches can be right, Giants can be good./You decide what’s right you decide what’s good.” This song can be seen as an anthem for The Midnight Mayor, in numerous ways. In the first Matthew Swift novel, our sorcerer/protagonist reluctantly accepted the concept that the greater good often requires sacrifices.  In this one, he discovers that there may be another way, and that rules have to remain in a constant state of flux in order to reflect the ever-changing City itself.