Ahoy, me mateys! Today, for a small change of pace, I thought it might be fun to take a look at one of my all-time fav’rite Saturday morning cartoons, The Pirates of Dark Water. Ah, I remember gettin’ up early to watch this with me Cap’n, back when I was just a little parakeet. 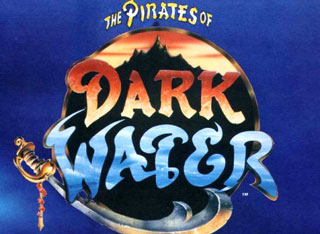 The Pirates of Dark Water

You can watch the original opening credits here!

And, now, I’m goin’ to hand the rest of this post over to me good friend, first mate Rob, who has been kind enough to write a review of this Piratickal saga for me lil’ column. Take it away, Rob… 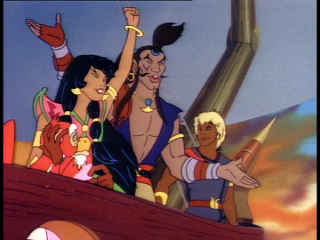 The cast of "The Pirates of Dark Water"

At first glance, the short-lived, early 1990s, animated children’s series, The Pirates of Dark Water, might not seem appreciably different from many other 1970s-1990s animated children’s series. It features fairly broad character tropes–a young man of destiny who discovers that he is a prince, charged with saving his world from destruction; a gruff pirate who hides a heart of gold underneath a bristly exterior; a strong female sorceress, or ecomancer, with a fierce intuition; an evil pirate lord and his cruel gang of sycophants who chase them episode after episode. It also contains often cheesy dialogue and follows a fairly set formula, overall. In each episode, the prince, Ren, the pirate, Ioz, the ecomancer, Tula, and their comedic sidekick, a constantly hungry monkeybird (as it sounds, half-monkey, half-bird) named Niddler, are pursued by the evil pirate, Bloth and/or his minions, are nearly caught, but then escape.(Admittedly, this is extremely reductive, as there were many episodes that deviated from the formula quite cleverly.)

Taking a closer look at the series, however, one might notice that it manages to distinguish itself in some significant ways.  While the characters and the plots of its standalone episodes may utilize stock elements at times, the show is fairly unique in its long-term plotting and in the construction of its world. In other words, unlike the vast majority of children’s cartoons of the era, there is actual plot progression. Things change. To sum up the plot succinctly, it is the tale of a young prince on the planet, Mer, who discovers that the only way to save his world from being consumed by Dark Water–a deadly, magically sentient form of black-colored water that consumes all in its path, like malignant tar–is to find thirteen treasures, known as the Thirteen Treasures of Rule, which have all been scattered and hidden. When all thirteen are found and united, he will have the power to restore Mer to its former glory. Therefore, over the course of the series, Ren and Co. set out to find the treasures, each one bringing them closer to completing their quest. This treasure hunt aspect to the series means that, although on the surface, there is a formula of seek-the-treasure, get-the-treasure, have-it-stolen-by-Bloth, and then steal-it-back-again, things do progress. The characters are continually amassing more and more of the required treasures, and at certain points, enacting changes upon their world by dint of having more treasures than when the quest began. 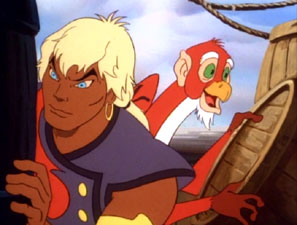 The show also has an intriguing and (for this sort of series) surprisingly complex mythology, which is doled out gradually as the series proceeds, with revelations regarding various histories and backstories appearing in successive episodes and thus further impacting the characters and their shared journey, not to mention making the planet of Mer richer and more layered. As the episodes proceed, we also are given further details about many of the strange cultures, creatures, and landscapes that make up Mer. It’s also rather interesting that the threat to the world is coming from two separate sources–the Dark Water being pumped to the surface from inside the planet’s core, and opportunists like Bloth who want to take advantage of the power vacuums now occurring across this broken world. The Pirates of Dark Water can be classified as one of the few children’s animated series to attempt, and in most respects, successfully create an on-going fantasy saga, and one that manages to capture a similar sense of joy and invention as the early Star Wars films, minus any pretension. The show, in fact, opens with a five-part miniseries, which perfectly sets the tone–that of an old-fashioned adventure serial with pirates and treasure and sea creatures and magic.

At the start, some of the characters are even more interesting than they eventually become. For example, it is not clear whether or not Ioz or Tula are fully trustworthy when the show begins. They each seem to have their own hidden agendas, and neither seem moral in the manner that we expect from our animated heroes. This aspect of the series is toned down in later episodes, likely due to the fact that morally ambiguous protagonists in a kids’ show would have most likely been a hard sell, but it is still exciting to see this sort of character depth appear in a twenty-year-old cartoon series, and flashes of this development continue to crop up throughout the twenty-one-episodes of this unfortunately-canceled-before-its-time series. This is, of course, one of the downsides to any arced series. If it ends before it’s meant to, we as viewers are left without resolution. For those interested in checking out The Pirates of Dark Water for the first time, I can tell you that the series ends on a pivotal event of a non-cliffhanger variety, so at the very least, the story concludes–or is cut off, rather–on a high note. 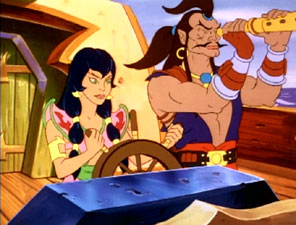 Furthermore, on the whole, this show holds up remarkably well. I first turned it on expecting some nostalgia whilst preparing to cringe, but I found an extremely fun series that may have its silly moments (though even these are quite charming), but is far more daring, bold, and innovative than it even needed to be. Ironically, these also may be the precise reasons it was cut down before it could complete its story. Apparently, the series was costly to produce–unlike most other Hanna-Barbera cartoons of the era, the series didn’t seem to constantly reuse animation, and what with all of the various creatures, sets, and battles, had a relatively sophisticated look–and the creative team often failed to meet deadlines due to its more complex plotting, thus eventually dooming it. And, yet, if they hadn’t taken the effort to make the series special, people probably wouldn’t remember it so fondly today.

The Pirates of Dark Water is currently available on DVD exclusively from the Warner Bros. Archive Collection.