Hello again, FutureFans! It is I, TomorrowLad! This week, we delve into the mysterious reaches of unreal reality!

Augmented Reality is, essentially, a computer modified version of our reality, with graphics or data projected by a computer to overlay our actual view of reality around us. As the name suggests, it’s supposed to be an improvement. You can think of it as halfway between this… 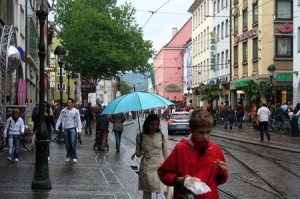 Image Credit: Till Westermayer via CC

(Virtual Reality – with some serious refinements)

Here, Matt Kwan, a PhD Candidate in Geospatial Science, shows how he turned a baseball cap into an Augmented Reality headset.

And he’s not the only one working on Augmented Reality! There’s also zeal…

Which reality do you prefer? Actual Reality? Augmented Reality? Or are you holding out for full on holodeck Virtual Reality?