Or at least it is in small doses, when the dwarfs aren’t pulling him away from certain places at the worst possible time–though they don’t do so maliciously. They’re just completely obsessed with their own agenda and don’t bother to take the time to worry about what Kevin wants. In that way, they’re not unlike his family, except his family is dull and lifeless, whereas this band of thieves–well, neophyte thieves, but thieves nonetheless–is vibrant and exciting, and as much as they drive him crazy, he does grow to enjoy their company, all while the film abjectly refuses to ever put any of them through a “heartwarming” moment together. Their camaraderie grows organically and without a single ounce of schmaltz.

But I seem to have neglected to actually talk about the “plot,” such as it is. Basically, these dwarfs are a few of the Supreme Being’s workers who helped him create the world–a conceit reminiscent of Douglas Adams’ planet builders, the Magaratheans in The Hitchhiker’s Guide to the Galaxy. But since it was a “rush job,” being done in only 7 days, there are a lot of fractures in space and time, through which people in the know can jump to emerge at different points in history. All of these “minor” flaws are collected on a single map, which the dwarfs stole from the Supreme Being before the film began, planning on getting rich by pilfering riches throughout history and then jumping to another time before they can be caught. They are particularly proud of themselves for stealing from Napoleon Bonaparte and then jumping back to medieval England, hundreds of years before he was born. 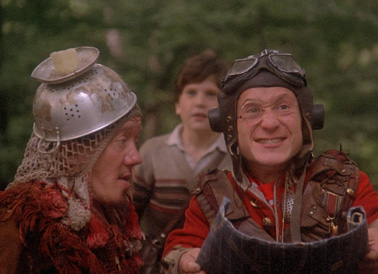 Meanwhile, however, they aren’t the only ones interested in the map. Besides being perpetually chased through the ages by the Supreme Being–most often represented by a large, floating, angry-looking heade–Evil also wants its hands on it, to use it to take over the world. And, yes, Evil is represented in the form of a man, played by a delightfully malicious David Warner. It’s basically God vs. the Devil, with most of the religious trappings stripped. And while all of the Supreme Being’s powers appears in the form of magic and enchantment, Evil is all about technology and gadgets. It’s even how he hopes to conquer all of the Supreme Being’s creation! 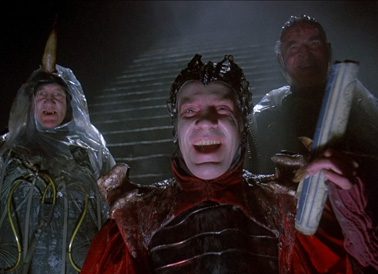 Which, while adorably dated today, is also a really nice bit of satire, as well as a perfect encapsulation of Kevin’s parents’ primary concerns. For all intents and purposes, they’ve already been seduced by this version of “Evil” before the story even begins, and in the shocking final moment of the film, they are literally destroyed by it. At the very end, when Kevin is returned home and a single charred chunk of Evil begins a house fire in their home, his parents notice it within their fancy toaster oven, and Kevin tells them not to touch it. As usual, they ignore him, and KABOOM! there is nothing left of either of them but a pair of flaming ashes on the ground, Kevin’s new status as an orphan implied to be superior to the life he had with them–a gleefully wicked bit of off-kilter humor with which to end this decidedly, wonderfully off-kilter film.

And the film’s genius lies in those touches, from lovably nasty surprises like that colliding with truly heartfelt moments, such as Kevin’s time with Agamemnon. In some ways, it’s a string of meticulous sketches filled with a truly awesome eye for detail and unbridled spoofery. Their version of Napoleon, for example–hilariously played by Ian Holm–isn’t just short but absolutely obsessed with other things that are small like him. He takes particular delight in the dwarfs because they are even shorter than he is…and love to hit each other. He, of course, loves his violence. There’s also a terrific little gag about him always keeping his left hand in his waistcoat a la his portraits, the reason here revealed to be that it’s because it’s a fake hand made of gold.

Meanwhile, Cleese’s aforementioned Robin Hood is a snob–a nod to the versions of the legend in which Robin is a nobleman who foregoes his title and wealth to fight for the people–and his merry men a bunch of thugs, such as the one who feels the need to punch each peasant in the face immediately after Hood gives them some loot:

Robin: Is that absolutely necessary?

Robin: What did he say?

Other Merry Man: He says, yeah, he’s afraid it is. 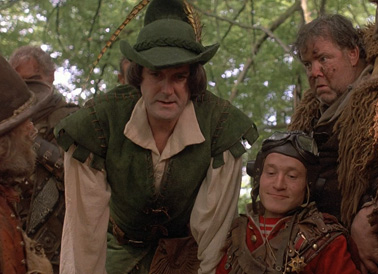 Other great bits include two lovers, played by Monty Python‘s Michael Palin and Shelley Duvall, who appear in both the medieval section and later as reincarnated versions of themselves on the Titanic, and whose reunion is ruined both times by Kevin and the dwarfs’ intrusion, and the fairy tale sequence the plays out when they arrive in the Time of Legends and are nearly devoured by an aged ogre called Winston (Peter Vaughn) and his wife, played by the terrific Katherine Helmond (of Soap fame, and who would later appear in Gilliam’s Brazil and the popular sitcom, Who’s the Boss?). This scene has always struck me as what would happen if the Beast had remained a Beast after Beauty had fallen in love with him, and she had instead become a bit monstrous herself, and then grew into middle age with him. “Shout horribly, and leer at them,” she asks him, with love in her eyes. “You know, the way you used to.” 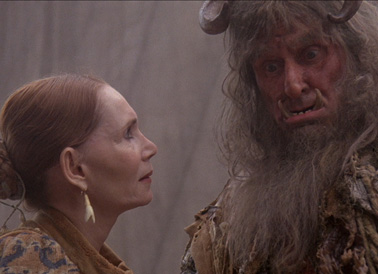 This leads directly into another scene, in which it’s revealed that the ogres’ ship is actually but a hat worn by a giant, depicted with a great perspective twist. This sort of inventiveness runs throughout the film, and what’s so great about it is how simple yet effective the effects are. The giant’s height is created through trick shots and models, the doors between the different times very simple effects work, and in the first scene when Kevin leaves with the dwarfs, they literally push one of the walls of the bedroom set further and further so that it seems like the room is lengthening into a hall, the latter of which is so straightforward an effect, it would work on the stage. And yet because all of it is so handmade, it has aged better than some late 90s/early 00s CGI, while also feeling more imaginative because of the limitations. I also particularly love the invisible wall that hides Evil’s Fortress. In the shots facing our protagonists through the wall, it’s clearly just made of glass, and yet when it shatters, you can see a matte of the fortress within the jagged framework of the otherwise unbroken landscape. 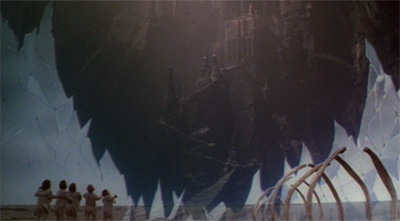 And it all culminates with a battle between Evil and various armies that the dwarfs bring in from various time periods, from ancient times to the 1940s, and includes some wonderfully inventive moments, such as when Evil transforms himself into a deadly carousel, and culminates with a literal deus ex machina in which we finally get to meet the Big Guy.

Broad, whimsical, and endlessly, endlessly inventive, Time Bandits is easily my favorite film in the festival to date.