And now, we begin the next sequence of our 1980s Fantasy Film Festival by rewatching the classic thematic trilogy of fantasy films directed by the mindshatteringly ingenious Terry Gilliam, beginning with the first, Time Bandits (with Brazil and The Adventures of Baron Munchausen over the next two weeks). Previously known as the American from Monty Python, Gilliam is one of my favorite directors of all time, nearly every one of his films either a jawdroppingly chaotic work of blistering genius, a jawdroppingly chaotic mess with flashes of blistering genius, or some combination of the two. There is no such thing as restraint in a Gilliam film, each and every one stuffed to the gills with some of the most ingenious, often operatic imagery, off-the-wall humor, and brain-altering concepts one will ever encounter on the silver screen, as if some mighty god of imagination’s head had been cracked open and spilled forth all of its wonders across the broadest canvas possible. His masterpieces and even his misfires are notorious for going over budget, being overblown, and usually driving his actors up a wall, and there isn’t a single one of them that I wouldn’t happily rewatch at any moment, from the heights of The Fisher King to the relative lows of The Brothers Grimm to the perplexing yet heartbreakingly captivating The Imaginarium of Doctor Parnassus.

Of all of his wonderful contributions to cinema, however, my favorite of Gilliam’s are his 1980s period, when he was making some of the most epic but also utterly bizarre works of fantasy ever put on film. The first, Time Bandits, which we begin with today, is a particularly great example of his freewheeling, mad, “kitchen sink” approach to filmmaking, because it combines multitudes of diverse elements, styles, and even various genres in a way that shouldn’t work–part time-travel adventure, part fairy tale, part myth, part quasi-religious fantasy, part heist film, part satire, part Monty Pythonesque comedy, part grotesque, absurdist Roald Dalhesque children’s story, part Tolkienesque fantasy epic–and yet does on every single level. It feels like dozens of films in one, each one pulling into countless different directions, with endless diversions and asides, and yet also remarkably cohesive at the same time, thanks to the director’s singular, charmingly warped vision. 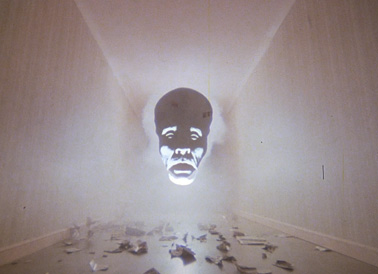 And all of the aforementioned influences, I believe that Dahl is the strongest one, or at the very least, the film shares his very unsentimental, unflinching depiction of both children and their parents, specifically unpleasant parents who, not unlike the Wormwoods from Matilda, would rather stare at the TV for hours than either pay an ounce of attention to their son or foster his interest in reading fantasy and history. Eleven-year-old Kevin constantly has his nose in a book, his form of escape from his home life, which mainly consists of his parents forcing him to eat dinner in front of the telly, as mind-numbing, absurd game shows blare out of it. Rather than encouraging his appetite for knowledge, they scold him when he tries to talk over the TV, their own most interesting topic of conversation being the latest kitchen gadgets they’d like to acquire.

Life goes on like this until, as in many a fairy tale, one night, a remarkable thing happens. While lying in bed, Kevin hears a strange rumbling coming from his closet, and a moment later a knight in full regalia riding his steed bursts out of it and jumps over his bed. Kevin follows him with his eyes only to discover that one of his bedroom walls has disappeared and he is looking upon woody terrain, reminiscent of Max from Where the Wild Things Are. He’s so jarred and even a bit frightened by the experience, though, that he hides his head and by the time he has lifted it, his room is back to normal, a picture of a knight riding through woods hanging on his wall seeming to have been the inspiration for this “fantasy”. Or was it? What’s wonderful about the scene is that it captures the perfect mixture of excitement and fear. Like all great children’s fantasies, there is something ever so scary about what happened, both in how the knight jumped out at the boy and in how he suddenly found himself elsewhere. It reminds me a great deal of the goblins’ first appearance in Jim Henson’s Labyrinth, which came out a handful of years later–that awe-inspiring yet eerie moment when the walls between fantasy and reality shimmer away, and fantastical creatures suddenly appear in what seems to be an ordinary child’s bedroom.

At the same time, although it scares him a bit, Kevin is a brave kid and eager to investigate what happened and so prepares himself the next night, lying in bed, armed with a Polaroid camera. And sure enough, magic visits him again that night, in the form of a troupe of dwarfs who come piling out of the closet. But these aren’t sweet, lovable Disney dwarfs. They’re a bit closer to Tolkien dwarves, particularly in how they appear in The Hobbit, but even given that, they lack their charm and overall good nature. These dwarfs are actually rather abrasive, brusque, and abusive to Kevin, at first roughing him up and later on being generally rude to him, like most of the characters that Alice crossed paths with in Wonderland. Meanwhile, they can also be quite bizarre. Vermin, for example, has a nasty habit of eating anything, including at one point a live rat.

There is something distinctly English about this depiction of fairy tale characters. Over the course of the film, no one coddles the young protagonist and, in fact, a great deal of the time, they don’t even seem to like each other very much. The dwarfs are constantly squabbling amongst themselves, and whenever Kevin seems like he might finally have found a person or place along the way that makes him happy, they drag him away from it, often close to kicking and screaming. The first time they do this is when they are marching him away from one of his heroes, Robin Hood–played by the magnificent John Cleese in the style of a magnanimous lord, in a terrifically funny cameo–and the second time when he lands in Mycenaean Greece and is nearly adopted by King Agamemnon, played with warmth and kindness by Sean Connery in a brief role but one which has a major impact on a kid who has never had a parental figure who has ever taken any interest in him. 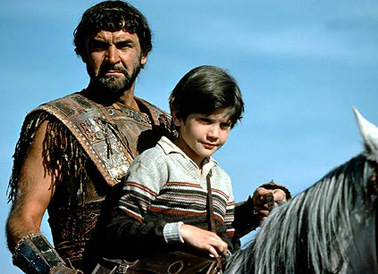 And that might be the element of the film that stood out to me on this viewing more than any other–that unlike most other little-kid-goes-on-an-adventure-in-a-fantasyland stories, this boy has absolutely no interest in returning home. Who would want to go back to drab, old “Kansas” when they have all of Oz to wander around in? And at least Dorothy had family who loved and cared for her. There’s nothing back in then-modern-day England for Kevin aside from parents who never give him the time of day. He doesn’t care about material possessions (other than books), TV, or technology. Kevin’s home has always been more in the stories he read and now he’s basically living within them. In many ways, it’s his dream come true.