Oh, and guess what? Holmes even has a evil, blonde, male nemesis who looks down on the lower classes. 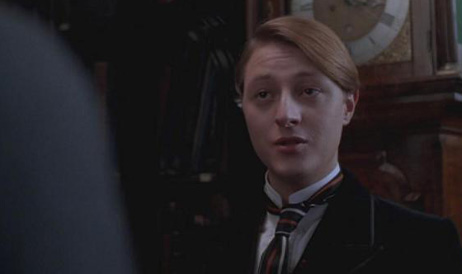 And his aforementioned fencing professor, who rarely if ever smiles, has something distinctly Snapeish about him, and is also evil (granted, Snape wasn’t in the end, but he came pretty close). 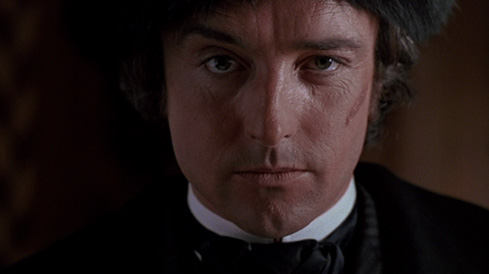 Everything from the character types to the environment to the very score rings with the feel of a mystery fantasy novel for kids, not unlike…that’s right, Harry Potter. Oh, did I mention when they fly past Big Ben? 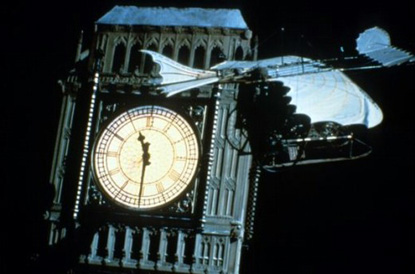 Flying by Night in London

I also have to mention the truly imaginative and often bizarre fantasy sequences which various characters experience upon falling victim to the cults’ poisonous blowdarts. They are extremely surreal and very dreampunk, sometimes verging on the horrific, and are composed more of practical effects than computer animation and so still look convincing and often eerie to this day. On the creepy side of things, we have a man whose poultry meal seems to come to life and start to peck at him. On the more humorous side–but still rather disturbing and utterly bizarre–Watson at one point dreams that he’s being terrorized by a bunch of anthropomorphic pastries that almost look like they stepped out of a stop-motion animated Christmas special. 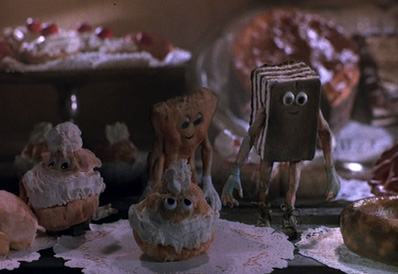 One sequence that does seem to be CGI but which still looks impressive to this day, perhaps because it’s done in such a relatively restrained manner, is a knight made of stained glass that chases after an old priest. 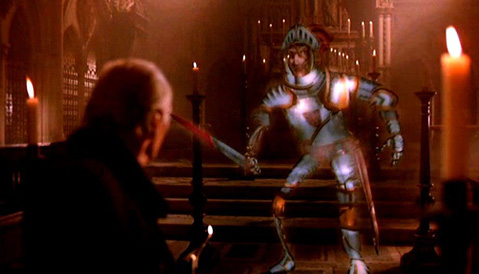 And although as the film proceeds, it begins to veer further and further away from anything resembling a classic Holmes story and closer to more of a kids’ Victorian Indiana Jones adventure, there are elements that remain very Holmes, from the secret society to the poison to the closed room mystery angle of how certain people are dying and/or being influenced to kill themselves, and also of course the characters who, as I referenced earlier, are basically spot-on. It’s full of lots of fun little prequel gags, from the first appearance of the deerstalker hat to the pipe, and it even features a surprisingly tragic twist that may not be given the full gravitas one would expect from such a dark turn–likely because it proved difficult to reconcile that tone with all the young adult fun of the rest of the film–but which is still impressively not undone by the end and which has a sizable, lasting impact on the characters.

Young Sherlock Holmes may not be perfect but it is perfectly delightful.