Also, amidst the seemingly paradoxical passion and simultaneous coldness of Holmes, he also establishes him as an earlier version of the character through a quiet sense of soulfulness that he weaves throughout his performance. In one memorable, particularly well-written moment, when all of the other boys are talking about what they’d like to be when they grow up, he simply says, “I never want to be alone,” which nearly caught me off-guard with how searingly sad that is, both because it speaks to a desire for human connection that he will never be able to fully attain because of who he is, and because he is so young and hopeful when he says it. Although a great deal of the film is indeed wonderfully silly fun, quiet moments like this ground both it and the character in humanity, rather than as simple literary pastiche or homage. Underneath the overconfident boy exterior, you can sense an element of melancholy.

What’s also heartbreaking is that he spends the film completely smitten with a girl–one of the few signs that he hasn’t yet grown into the Holmes of legend–and yet we know from the start that it can’t possibly end well, because of his solitary life (other than Watson) in the future. And, as it turns out, how that particular thread unfolds in this film–which is also tied into the proto-Moriarty’s repeated lesson to Holmes that he has to learn to be less emotional–directly leads into why he becomes the emotionally closed-off man he does.

Meanwhile, Alan Cox’s Watson may stick closer to the general old-school film conception of the character, rather than Doyle’s original–meaning he’s a bit podgy and not nearly as quick-witted as Holmes–but since this film is largely paying tribute to the more well-known pop cultural beliefs about the characters (as The Great Mouse Detective does), it works. Also, interestingly, it does give Watson a bit of the gumption that later film Watsons would have, particularly Martin Freeman’s in the current BBC series, Sherlock, Jude Law’s in Guy Ritchie’s Sherlock Holmes films, and Lucy Liu’s gender-bent version in Elementary. Rather than simply being obsequious to Holmes and praising him as a lot of the classic film Watsons do, this young version of Watson is as flustered with him as often as he is mystified. He is, however, not as smart as the later Watsons, who may not be Holmes-level geniuses but are doctors and therefore intelligent in their own rights. On the other hand, he is still a kid. 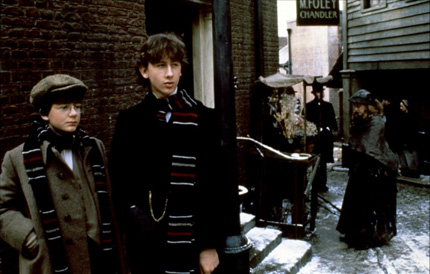 But let’s jump to what I love most about the film: the Harry Potterness of it all. Or should that be the other way around? First off, there is the fact that it’s primarily set in a boarding school whose environs look like a medieval castle a la Hogwarts. Even the room where they take their meals looks uncannily like the Great Hall of Hogwarts. Meanwhile, the external shots of London, being Victorian era, can’t help but look a great deal like Diagon Alley.

And then there is the main character pairing of two boys and a girl (Holmes’ love interest, Elizabeth Hardy)… 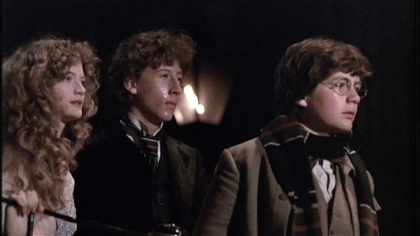 …one of whom, Watson, has brown hair and glasses, and all of whom team up to solve a bizarre mystery involving various seemingly supernatural elements that put their lives in grave danger. It even culminates in a secret, archaic chamber or horrors (inside a giant pyramid hiding inside a building in London)! 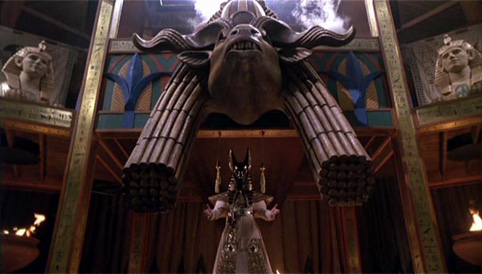