And now as the “Legends and Mythology” sequence of our 1980s Fantasy Film Festival continues, we come to Erik the Viking, a film I really wanted to love for numerous reasons. For one, it has become something of a cult classic since its initial, critically maligned release in 1989, and if there’s anything I tend to love, it’s a misunderstood cult classic that a dedicated albeit small group of loving fans cherish beyond reason. Secondly, it was created, written, and directed by Monty Python‘s own Terry Jones and features not only Jones but the great John Cleese in small but memorable roles. Thirdly, it’s a late 1980s fantasy comedy that puts a humorous spin on Norse mythology. Believe me, I went in expecting to love it.

As it turns outs, that didn’t end up happening. This story of a hapless young Viking, Erik, (the always fantastic Tim Robbins) who doesn’t really have the warrior spirit of his forbears and, after accidentally killing a woman he’s trying to save from being ravaged by his Viking brethren (more on that in a bit), decides to go off on a noble quest to awaken the gods and thus end the harsh age of Ragnarok from the land. I was expecting Python-style comedy, silly monsters, and fantasy excess in droves. Instead, the film is an uneasy mishmash of humorous bits–some genuinely funny, demonstrating flashes of the old Python genius, but many more of them surprisingly leaden misfires–grafted onto a more ponderous fantasy epic framework, causing a split personality that never manages to resolve itself and leading to a finished product that is often dishearteningly dull. 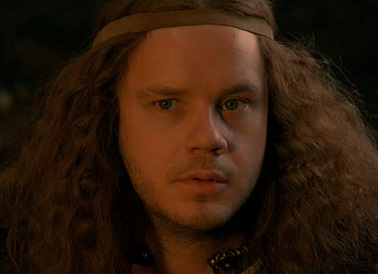 While I’m not surprised that this didn’t turn out to be an out-of-left-field heartbreaking work of staggering genius, I certainly didn’t expect that I would need to divide this film into three separate viewings just to get through it, but unfortunately, the handful of sincerely funny and/or just plain interesting moments are few and far between, and none of them are really worth the slog. As I’ve said about some previous films in this festival, this may be a “you had to have grown up with it to appreciate it” sort of film, however when it comes to a production created by former Python members, that shouldn’t be the case. Why, the next sequence in our festival after this is entirely devoted to the work of Python‘s other Terry, Gilliam, and his films, though not always perfect, are never boring and are almost always ingenious.

Erik the Viking actually starts out pretty well with an opening scene that is as gleefully controversial as it is caustically funny. In it, a Viking horde is descending upon a poor town, burning it to the ground, slaughtering all the men, and, yes, raping all the women, when suddenly along comes Erik. It’s his duty as a Viking to rape. And yet when he advances on his first potential victim, Helga, he finds himself unwilling to–finding it a bit, well, barbaric. As soon as she notices this weakness, they begin having a conversation about the Viking way of life, him trying to explain to her why Vikings need to do all of this plundering in order to pay for their expeditions, and her responding that, since all they do on these expeditions is plunder, then they could save a lot of time and effort by just staying home…and it’s actually a terrific scene. Incredibly dark and edgy but also darkly funny, in a very Python way, reminding me of Dennis the Peasant’s discussions about political theory with Arthur in Monty Python and the Holy Grail. And when Erik then accidentally impales her with a sword while trying to kill another Viking who tries to rape her, this brilliant exchange occurs:

HELGA: (ironically) Thank you for saving me from a fate worse than death.

HELGA: Oh, that’s all right, then. It’s the thought that counts…

It can be very difficult to handle any humor involving rape well, but this scene pulls it off. And if the rest of the film could have risen to that level, it might have been very good. However, from that point on, it often veers between Vikings-being-gross sort of gags and a running thread in which Erik is perpetually haunted by Helga’s ghost, continuing to be a horrific reminder of what he did to her, turning something that was gruesomely funny at the time into something that tries to be genuinely tragic. And it just doesn’t work. It would be as if Lancelot, after accidentally killing the girl’s father at her wedding in Holy Grail, kept experiencing PTSD flashbacks of the event for the rest of the film. Over-the-top parody humor works in over-the-top parody films, but trying to mine genuine emotion out of a cartoonish death just makes the whole thing feel off-kilter, because it’s difficult to tell when to take the film seriously. Unless all of those after-death appearances were meant to be funny, too, but they certainly didn’t read that way to me. And when watching a comedy such as this, if one can’t even tell when something is meant to be funny–whether or not it succeeds at being funny is a different story–then there’s definitely a creative problem here. 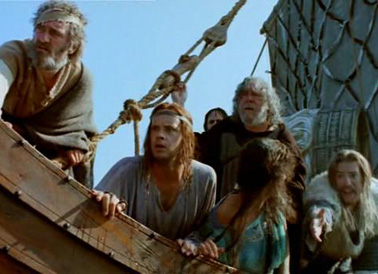 Particularly when the film’s opening scene proves to be the peak of its cleverness and wit. Nothing that comes afterwards matches it. There is a lot of the aforementioned gross-Viking humor, which is mostly meh. They even bring the legendary Mickey Rooney on as Erik’s grandfather to be gross for a little while. Eartha Kitt is mostly wasted in a short cameo as a wisewoman called Freya (who may or may not be the Norse goddess of the same name) who sends Erik on his journey. There’s a sea battle against a giant dragon, which isn’t distinctive or memorable enough a scene to be worth watching for a fantasy genre fan and isn’t funny at all, so certainly isn’t worth it for a comedy fan. John Cleese plays an evil Viking from another tribe who hunts them down for a while, because the weapons business needs Ragnarok in order to continue making a profit, which I guess is kind of funny but nothing to write home about. There’s a brief sojourn on a magical, peaceful island headed by Terry Jones as an extremely effeminate ruler that could have been funny but just isn’t really. Comedic mincing stereotypes have been done far better than this, and the gag about his trying to get his people to launch into a musical number that is completely atonal and off-key falls flat on its face. 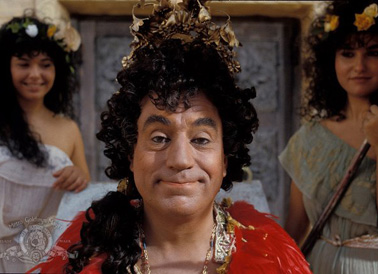 In the end, there is one clever bit, when they finally reach Valhalla and learn that the great gods they’ve been seeking are actually nasty little children who couldn’t care less about Earth but who punish our heroes for breaking into Valhalla by flinging them down into Hell…which turns out to be Earth, where they’d been living this whole time! Or, at least that’s what I thought had happened when I saw it. Online synopses seem to indicate that what actually happened was they were saved at the last moment by the magical Horn Resounding (a plot point I neglected to bring up earlier, because there’s really not much point), and that’s why they returned home rather than Hell. Which is actually much less interesting, much less intelligent a conclusion, but again, it goes to show just how muddled the film is that I honestly had trouble following it. It’s not like this is a dense work of arthouse cinema. It’s a silly 1980s fantasy comedy. Or should have been. I’m not really sure what exactly it is, and it doesn’t seem like the filmmakers had a great handle on it, either. Oh, well.