And now we move into the second sequence of our 1980s Fantasy Film Festival, “Legends and Mythology” with the much beloved 1981 classic, Clash of the Titans, which I had somehow managed to never see in full until now. I had caught random bits on cable at various points, as well as in a college class I took on Greek Mythology, but this was the first time I sat down and saw the original Hollywood version of the legend of Perseus from start to finish, and I really enjoyed it. 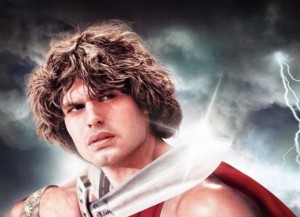 “Clash of the Titans”

Now, I have to say, I didn’t love it as much as I had expected from its reputation, however I also got the sense that it’s another one that it helps to have grown up watching because, in many ways, it hasn’t aged terribly well. And that isn’t necessarily due to Ray Harryhausen’s stop-motion effects, which I adored, nor is it due to the entire film’s overall old-fashioned aura. If I didn’t know that this were filmed in 1981, I likely would have guessed it was from the 1950s. It has the feel and look of an old-fashioned Hollywood epic, and the deliberately old-timey effects contribute both to the throwbacky feel of the entire production, as well as to a great deal of its charm. I love old movies generally, so that wasn’t the problem.

At the same time, however, this is one case where high-definition can actually hurt a film, because the image is cleaned up and enhanced to such a degree that the seams in the effects and the matting really show, to genuinely distracting levels, which made it very difficult for me to ever fully suspend my disbelief. At only one point in the entire film did my brain ever get to a place where it fully accepted the reality of what was happening on screen. Instead, practically every shot revealed some imperfectly integrated element that reminded me that I was watching a movie, and an often clunky one, at that. Because I was so hyper-aware of the film’s visual flaws, it also unfortunately drew attention to its other flaws, such as the at-the-time pretty Harry Hamelin’s leaden acting, the lack of narrative momentum, and the strange tonal blend of camp and gravitas, which works beautifully in some other films but doesn’t feel perfectly calibrated here.

Maybe it was just overhyped for me.

But don’t get me wrong. As I said before, I did enjoy the film, and often a great deal. I mean, how could I not? We have Laurence Olivier as a most regal Zeus, complete with 80s-fabulous blue neon lights emanating out of his throne… 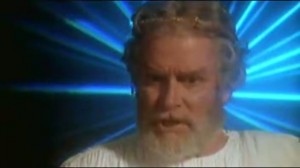 We have Maggie Smith, as the goddess Thetis, looking remarkably young with reddish brown hair and a significantly plunging neckline (it’s so strange to think that this was only 10 years before she looked practically ancient as Old Wendy in Hook in 1991, and 2 years later, Mother Superior in Sister Act)… 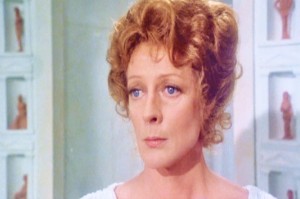 If only more of the film focused on these old Hollywood gods and goddesses, moving mankind around at their whim, like toys, than on pretty, dumb, young Perseus, who can’t help but not make the most compelling of young heroes…

Even after the gods grant him with magic items such as a helmet of invisibility, an unbreakable sword, and a strong, reflective shield, he seems to keep going out of his way to mess things up, running off multiple times without all of the items, and losing almost each one irretrievably over the course of the film. It makes it very difficult to believe, when he later guesses a riddle, which no other suitor of Andromeda has been able to do. This is not a face that conveys brilliance: 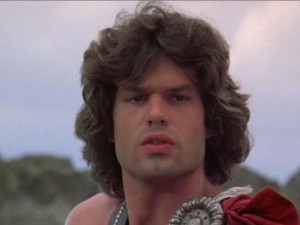