Three films into our 1980s Fantasy Film Festival, and probably the major uniting factor between these sword and sorcery entries so far is that they are all ridiculous, in various ways. For some reason, however, The Beastmaster is the first one that I enjoyed thoroughly, without any hesitation, and which held my interest from start to finish with nary a lull (while Hawk the Slayer is extremely fun, its nearly-Ed-Woodsian levels of incompetence can grow wearing by the end).

This is a deeply weird film, and not only because it centers on a practically naked, utterly ripped man in a loincloth called Dar who travels around a secondary world fantasy countryside, telepathically communicating with animals and sometimes seeing through their eyes–his main buddies being an eagle he calls Sharak, a mischievous pair of thieving ferrets he calls Kodo and Podo, and a black tiger, Ruh. No, it’s weird on whole other, exposure-at-a-young-age-could-lead-to-years-of-therapy levels. 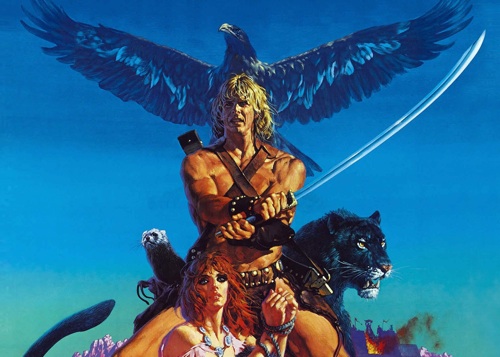 Not as weird as it gets…

It starts of with Rip Torn as an evil sorcerer priest–these sword and sorcery films love that trope–named Maax, pronounced “May-ax” (could have been worse, I guess; it could’ve been spelled Ma’ax, although I do have to wonder if he has brothers named Saam and Daan), with an evil scheme to take over the kingdom, which might be thwarted by the son of King Zed, because prophecy states that when the still-in-the-womb baby grows up, he will kill Maax. And so Maax does what any evil sorcerer priest with half a brain and an enormous, beaky prosthetic schnoz would do… 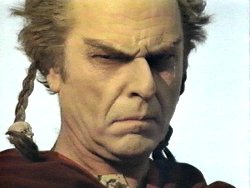 A nose for evil.

…and the faces of dead hags whose corpses have been left to rot in the sun. 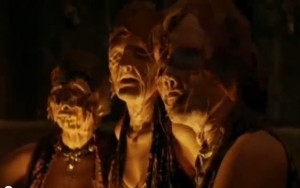 I’m not sure why they seem to focus all of their magical powers on creating the illusion of youth and beauty for everything below but not above the neck, but hey, I’m not a medieval cult crone.

Anyway, the first truly disturbing moment of the film occurs when one of the hags bursts into the tent where King Zed and his pregnant, unnamed wife are sleeping, and performs a freakishly bizarre spell in which she somehow transfers the baby from her mother’s womb into a living cow, the effect looking like something of a cross between a vacuum cleaner and a teleporter. In other words, lovely. Soon afterwards, the hag cuts the baby out of the cow and uses a red-hot poker to brand his tiny, newborn hand with the sigil of Maax and her dark god moments before attempting to run him through with a dagger. 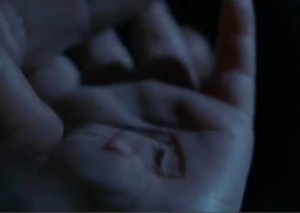 Not a Gerber brand baby.

And she would have gotten away with it, too, if it weren’t for a pesky villager who manages to kill her–remarkably easily for a creature with so much magical powers–and raise the boy as his own. It’s unclear if Dar’s later Dr. Doolitian abilities arise from having been born from a cow, the brand on his hand, or some combination of the two, but they have to be related, right?