Hawk the Slayer is the most ridiculous film I’ve seen since…well, since last week’s 1980s Fantasy Film Festival entry, Conan the Barbarian, except unlike that leaden, seemingly endless film, Hawk the Slayer is actually a lot of fun. Rather than trying to attain anything approaching the level of operatic grandeur to which Conan constantly strains, Hawk the Slayer seems to revel in its poorly written, directed, edited, and special-effected low-budgetedness, and to almost wear it as a badge of honor. Seriously, if you had told me that Ed Wood had directed this film, I would have almost believed you.

Although most often characterized as being in the “sword and sorcery” genre, Hawk the Slayer actually shares more kinship with Tolkien. If you removed Lord of the Rings‘ brains, heart, and sense of epic sweep, replaced practically every character with a funhouse mirror version that vaguely resembled some aspects of the originals…except totally crap, spent what seems like a combined total of $10 on locations, costumes, and effects, and set it all to a score that can only be described as medieval disco (imagine the Bee Gees with pan flutes), you very well might end up with a carbon copy of this deeply silly…whatever the hell it is.

As Douglas Adams described his famous two-headed character, Zaphod Beeblebrox, Hawk the Slayer “is just this guy, y’know?” Although he has a fairly badass name, we never actually get to see him earn that title. From start to finish, he never really does much–if any–slaying. Mostly, he just stands around, looking very blandly heroic… 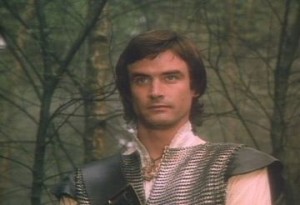 …and speaking in monotone. Every time he actually starts to advance with his sword, the camera instantly cuts around the fact that the film has no fight choreography to speak of, everyone simply swinging their swords at each other with broad, chopping motions and no sense of finesse. Speaking of which, Hawk’s sword is magic, with a hilt in the shape of a golden fist (no, really)… 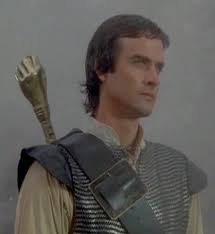 …grasping an elfin “mindstone,” whose sketchily defined powers allow him to (a) win fights real good and (b) mentally float the sword to his hand whenever he reaches for it, which, I guess, is helpful in not having to bend down to pick it up all the time when he’s ready to do his “slaying” or after his “slaying” is done. I mean, those are valuable seconds he could have been wasting.

The film kicks off with a prologue in which Hawk’s EEEEEVIL, stunningly older, and surprisingly American-accented brother, Voltan–played by Jack Palance, in one of the hammiest performances that has ever hammed–kills their father. Because EEEEEVIL. 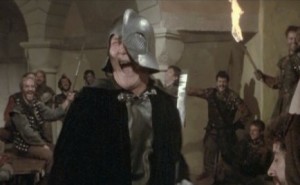 He is even referred to as the Dark One, even though, unlike Sauron or Vader or Voldemort, he has no sorcerous powers. Unless super-crankiness counts as a power. At least he does have supernatural help in the form of a raspy-voiced, hooded witch creature who is, visually and aurally, a dead ringer for Shadow Weaver from She-Ra. 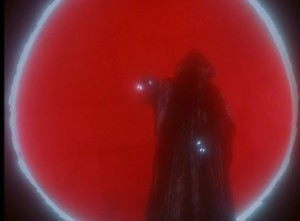 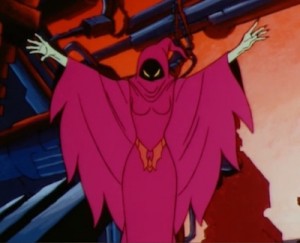