Today, we kick off our 1980s Fantasy Film Festival with the classic sword-and-sorcery film, Conan the Barbarian, which made a star out of Arnold Schwarzenegger and is known for its over-the-top carnage, sexuality, and operatic broadness. Based on the 1930s pulp stories of Robert E. Howard, Conan is a barbarian hero from the Hyborian Age, a fictional period created by Howard that was set after the Age of Atlantis and before any current known civilization. The film apparently takes many liberties with the character, telling a largely Wagnerian-opera-inspired tale of a young man seeking revenge against Thulsa Doom, an evil snake god cult’s dark wizard leader, who killed his parents and fellow villagers when he was a child, and then enslaved him for many years. Thulsa Doom is played by James Earl Jones, rocking a long, luxurious wig of lovely medieval fantasy hair.

I really, really wanted to love Conan the Barbarian. Hell, I really wanted to even just plain enjoy it. Not only had I heard people talking about it for years but it seemed exactly the right brand of grand, operatic, mythic camp silliness to speak directly to my tastes. After all, again, it has James Earl Jones in this get-up, looking disarmingly like a prep school mean girl… 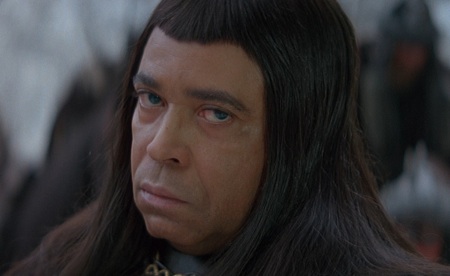 …it has Ahnold in practically prehistoric garb, desperately straining to evoke something resembling human emotion and miserably failing at it, because, as everyone knows, he is a huge, overbuilt, Austrian robot man… 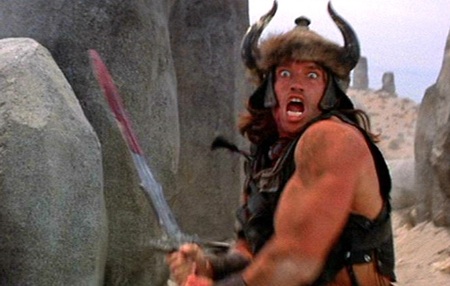 …and it contains a scene in which a drunken Ahnold, for no discernible reason, punches a camel in the face: 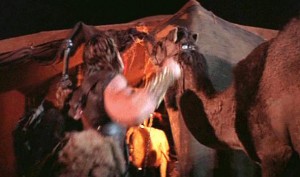 Sadly, however, I’m pretty sure that that last thing is the most lasting impression I’m going to take away from this film, which I found so deadly boring and stultifyingly brain-numbing that the only reason I was able to claw myself all the way through to the end at all was that I wasn’t going to let the very first film of this festival defeat me. I will say, however, that, at the outset, I had been planning on watching the sequel, as well, and now that is not happening in a million years. Even given the knowledge that, in it, in what becomes something of a running theme, Ahnold punches a horse in the face. For reasons?

So, what’s the problem here? Although the pacing is certainly slower than today’s action films, not only did I grow up in the 80s, but I’ve seen countless 80s films, many of which I still love today. So it’s not just that it isn’t as swift or narratively economical as some of today’s films–I actually respect it, in some respects, for taking its time–but that it feels so relentlessly empty-headed. It’s one thing for a film to gradually build character development, exposition, and worldbuilding in order to make an ultimately more satisfying story, such as in the first Star Wars film. It’s quite another thing when the characters are all such flat caricatures. Ahnold doesn’t speak a single word of dialogue until 25 minutes into the film. And, of course, once he does, I kind of wish he’d never opened his mouth. 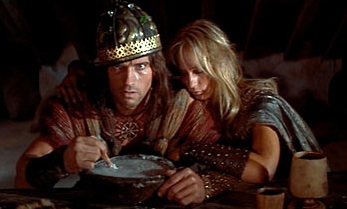 Ahnold demonstrates how the best way for an actor to convey emotion is through his eyes.

He is extremely effective as a walking prop, but without the humor and intelligent sci-fi writing of classics of his such as Total Recall and Terminator, there is nothing to divert my attention away from his inability to act his way out of a paper bag. In order to get me at all interested in the journey of a hero on a quest of vengeance, you have to at least convince me that said hero actually cares about said quest and isn’t just stomping around, doing bad community theatre on the big screen. But both Ahnold’s acting and Conan’s character are entirely one-note. There’s no there there. Why does he do what he does? Um, because big strong? And angry? Sure, there’s a certain level of unintentional camp amusement in watching Ahnold try to act, but that’s funny for about 5 to 10 minutes. 129 minutes of it is torture. Especially when the director, John Milius, seems to think he’s making something with the portentous weight of a Cecil B. DeMille bloated biblical Hollywood epic.

The film thoughtlessly meanders for 95% of its running time. Events occur, one after the other, and yet Conan is strangely devoid of any sort of emotional arc. Instead, it feels like a series of sequences, following one another in a chain but with no narrative momentum or drive. After years of hard labor, Conan is sold to the gladiator pits. And he fights for a while, winning many battles. And then he’s freed. And then he’s chased by wild dogs. And then he winds up in a tomb where he finds an ancient sword. And then he emerges, wanders around a while, and meets an alluring woman in a hut. And then they start having sex, and she suddenly turns into a demon–because WHORE DEMON–which he throws into the fire.

Why you always need to wear protection.