BEWARE: SPOILERS! I can think of no better way to end this long series of Disney posts than with the company’s most recent masterpiece, Frozen, which in many ways truly feels like the grand culmination of my entire journey thus far, being not only a breathtakingly gorgeous, exhilarating, funny, sad, moving, and tuneful fairy tale musical, the pinnacle of Disney’s arguably greatest (or at least most prevalent and lasting) contribution to popular culture and art, namely the Disney Princess Film, but also a gloriously subversive twist on their standard formula. 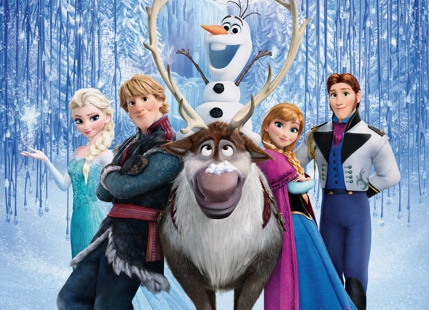 The Cast of “Frozen”

If each of the Princess Films since the start of the Disney Renaissance has inched the genre closer and closer into a more modern, feminist portrayal of a heroine who can stand bravely on her own, and who may have a man by her side but doesn’t require one for her fulfillment as a human being–and this has improved by leaps and bounds from Enchanted onwards–Frozen finally makes it all the way there with a film that succeeds on every level: as sublime entertainment, as visual and musical tour de force, and as female empowerment saga. And it’s done in a way that’s specifically designed to be appealing to all viewers. This film isn’t just about inspiring girls but inspiring people, period, and it does so by crafting two complex central female protagonists and treating them not as mere symbols or representations of various types of womanhood, but–again–as people. Very loosely based on Hans Christian Anderson’s The Snow Queen, Frozen is–in many ways–the ultimate Disney Princess film. After all, it revolves around not one but two (until, that is, one is crowned Queen), and yet flips the concept of the “Disney Princess film” on its head at practically every turn. For starters, it centers on the relationship between two sisters, and is one of the very few animated Disney films to pass the Bechdel Test, and at one point, even in song no less! (Technically, Tangled passes, as well, although here, the conversations are between two sisters who have been estranged and have a great deal to work on in their relationship but who, underneath it all, love each other deeply, whereas Tangled has a deeply toxic mother-daughter relationship, which doesn’t undermine that film’s feminism in other respects (feminism doesn’t require that all female characters like or are kind to each other at all times, and Rapunzel and Gothel’s relationship is dark and complex), but what Tangled does lack–as most films do–is a friendship between female characters depicted on screen.) 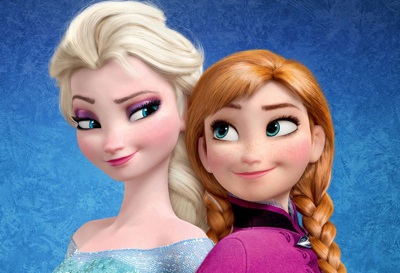 For the majority of the film, there is no traditional villain. The enchantress who has put a curse on the land is actually one of the protagonists, and she does so accidentally, without malice, and as the ironic result of her parents having encouraged her to suppress her magic for her entire life, due to misinterpreting advice from the trolls after Elsa, as a child, almost killed Anna with an accidentally aimed blast of her wintry power. The true villain to conquer in the film is actually the sisters’ lack of communication between one another and Elsa, the “Snow Queen”‘s self-isolation, brought on by their deceased parents’ understandable but deeply unwise decisions. There is one other villain, Hans, although he mostly represents petty human greed and is more an impediment to the sisters’ happiness than the sort of epic threat generally faced by Disney protagonists. What makes him truly fascinating, however, is how he is an inversion of the classic Disney prince. 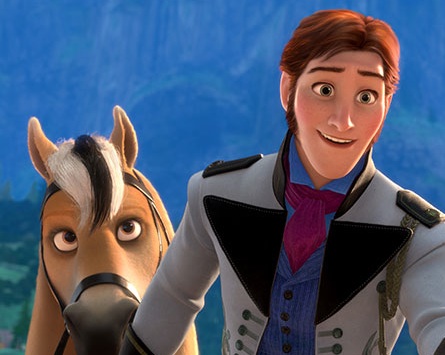 Before Elsa’s coronation, the young Anna is giddy with excitement at the idea of a huge party, and one of the first things she imagines is that she will, that very day, meet and fall in love with a young man, who will be perfect for her and sweep her off her feet. And, lo and behold, that is exactly what happens. She meets a dashing, very handsome young prince, who also seems to be entirely on her own slightly goofy wavelength and to be absolutely perfect for her. In a classic Disney film, this sort of love-at-first-sight would culminate in wedded bliss, and our heroine’s future would be set. In Frozen, however, Elsa thinks Anna is crazy for deciding to marry someone she’d just met, and later on, Kristoff echoes those sentiments. And as it turns out, this prince, Hans, who seems too good to be true, actually is. The youngest son of another kingdom, therefore very unlikely to inherit, this conniving man set his sights on Anna and posed as the perfect match in order to eventually take over her kingdom, Arendelle, with plans of killing both sisters.