In the original story, soon after being marooned on Africa, Tarzan’s British parents die, his mother due to falling ill and his father at the hands of the king ape, Kerchak. Afterwards, he is rescued by a kindly female ape, Kala, who becomes his adoptive mother.

In Disney’s version, Tarzan’s parents are both killed by Sabor, a savage leopard, who also murdered Kerchak and Kala’s infant child shortly before. When Kala discovers Tarzan, she is still in deep mourning over her own lost child, when this human baby’s cries call her over to his parents’ settlement. Once she realizes what has happened to them, she fights off Sabor herself and decides to raise the strange, hairless boy as her own. Despite her affection for Tarzan, however, Kerchak refuses to accept or embrace him. To Kala, he is her son, just as much as if he had been born to her. She grieves for her own child by transferring her emotions onto this boy, who needs her love and protection, whereas Kerchak can’t see past Tarzan’s species, as well as the fact that he isn’t his natural-born son. 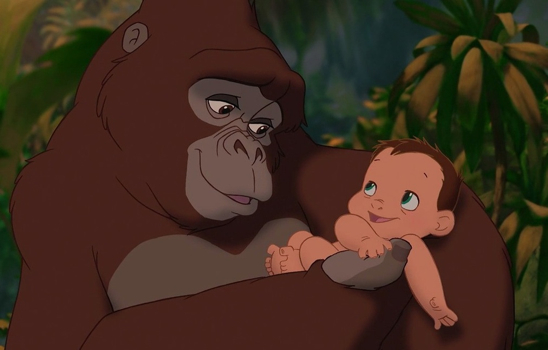 In making these extremely wise alterations, the Disney film strengthens the story’s emotional framework for a modern audience. Sabor’s deadly actions provide a link and unbreakable bond of shared loss between Kala and Tarzan that’s more meaningful than had Kala simply rescued the boy from Kerchak, while at the same time paying respect to the original story by establishing the contentious relationship between Kerchak and the young man. Kala never considers herself anything less than Tarzan’s mother, period, making a strong pro-adoptive family argument, while Kerchak represents those voices in society who try to delegitimize adoptive children as being equal to genetic offspring.

Meanwhile, the arrival of Jane and her father (along with the villainous Clayton) to their world–the first time Tarzan sees another human being and finally realizes why he is so different–helps dramatize that moment in every child of adoption’s life when he or she first learns that his parents didn’t conceive/give birth to him. The pain Kala goes through as she realizes Tarzan seems to be beginning to gravitate more towards his own species feels so real and raw because it’s rooted in the emotions that actual adoptive parents often go through when their children want to explore where they originally came from, while Tarzan’s ultimate decision to remain with his real family–the one that raised him–reconfirms that family is not dependent on blood. This is also underlined by Kerchak, in his dying moments, when he finally acknowledges that the loyal, brave Tarzan is his son and that he was wrong to treat him as an outsider for all of these years.

The voice work in the film is universally marvelous, particularly Minnie Driver, who infuses Jane with passion, humor, and life, creating a splendidly comedic and warm character in this enthusiastic Victorian female science geek, traipsing about the jungle in a bustle, who discovers more than she ever imagined. She is also a vast upgrade from the original Jane, who rather than purposefully heading to Africa with her father in order to study apes as Disney’s Jane does, was simply marooned as Tarzan’s parents were, and spends most of the time as a damsel in need of rescue. That isn’t to say that she never needs help here, mostly because she doesn’t know the environs as well as Tarzan does, but she also helps him, aiding not only in the showdown with the villainous Clayton but also in teaching Tarzan both English and the ways of humans, versus the original story, where Tarzan is taught French by a French naval officer. 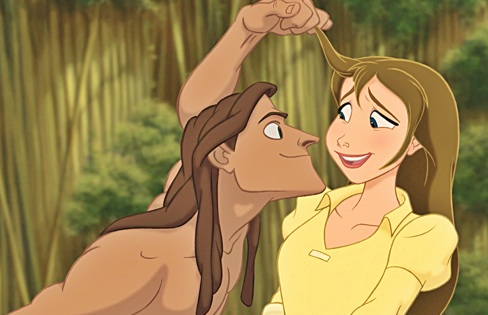 And, if for nothing else, Disney’s Tarzan will be remembered for its visually dazzling effects. Perhaps the most brilliant concept in the entire film is how it equates Tarzan with a surfer (He even has the general look of a white Californian surf dude, along with faux-dreadlocks. The only thing he’s missing is a sun-shaped tattoo on his arm.), except instead of surfing in the ocean, he surfs the trees, riding each twisting branch from tree to tree as if he’s gliding across the crest of a wave. Although the CGI has aged slightly, at its best moments, it’s still extremely awesome and kinetic to watch, with roller-coaster style shots that are as close to 3D as a non-3D film can come.

But underneath the action and the visual thrill ride of it all, this film has genuine heart and emotional substance and a near-perfect marriage of plot, theme, and tone, making it one of the most unexpectedly strong films in the latter half of the Disney Renaissance.