After a minor dip in quality–ahem, The Rescuers Down Under–the Disney Renaissance gets back in full swing with what might very well be the Disney Masterpiece. With lush, exquisite animation, a fully realized love story in which the male and female characters actually spend a great deal of time both on screen and together, a superb, timeless score by Ashman and Menken, and some of the most resplendent magic to appear in any animated film, Beauty and the Beast is practically perfect in every way, and also the first animated film in history to be nominated for an Academy Award for Best Picture.

And while many Disney films verge a great deal from their original source material, Beauty might be the first and best to do so with the specific purpose in mind of making its story more feminist. In many ways, the film can be seen as a direct response to many peoples’ issues with the company’s past depictions of their princesses. What many don’t realize is that Disney’s Beauty and the Beast actually completely subverts the message of the original story! 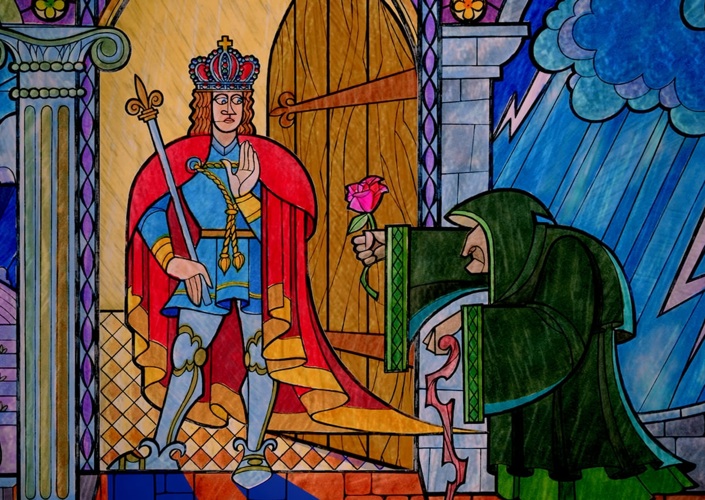 The prince and the enchantress.

Originally written as a 362-paged novel in 1740 by Madame Gabrielle de Villeneuve and later adapted, shorted, and improved in 1756 by Madame Madame Le Prince de Beaumont, Beauty and the Beast was meant as a lesson for young girls at court, to teach them about what was fast approaching in all of their futures: marriage. At that time, girls were married at a young age, and were expected to appear as mature ladies of court. Of course, in actuality, they were barely out of (or possibly still in) adolescence. Most of them were fearful and shy about the prospect of marriage, and, even more so, what would be expected of them in their post-nuptial beds. To them, their future husbands seemed to be large, hairy beasts, governed only by their animalistic urges. The girls feared that these men would ravage them on their wedding nights like savage beasts. And thus, in the tale of Beauty and the Beast, the man whom Beauty will marry is a beast in literal form. And what happens at the end? Right before their marriage, the Beast finally loses his ugly, animal body and Beauty can finally see him for what he truly is: a caring, handsome prince.

The story suggests more, however, than just that men are truly not beasts; it actually indicates that the young women, who fear the men, are the true beasts for not being able to immediately see past their prejudices as to external appearances and discover the noble hearts underneath their fiance’s burly exteriors. There are some very interesting things to note about the Beast in the original story. For one, he is a humble creature. True, his first demand to Beauty’s father that he will kill him unless he gives him one of his daughters seems monstrous to our modern sensibilities. But on the other hand, when Beauty’s father refers to the Beast as “My Lord,” he is too humble for such words. He knows that he is ugly and unlovable, and so tells the father, “My name is not My Lord…but Beast.” His demand to the father seems almost sad when the reader realizes that no one has ever loved this poor Beast before, and he sees no other way that he will ever find love from a woman than this method. He also bestows riches upon the man to lessen the severity of his demand.

Although Beauty is set apart from the start as a very sweet, lovely girl, even she cannot see the good in the Beast right away. From her first meeting with him, she is terrified. She puts on a brave front in order to save her father’s life, but it is clear that the Beast repulses her. Even when it is clear that he does not mean to kill her, and lavishes her with many magical and wondrous gifts and riches, she still cannot overlook his outward appearance. And that is the beastliness of Beauty: she cannot see the Beast for the kind man he really is, and therefore she is the true monster of the story. 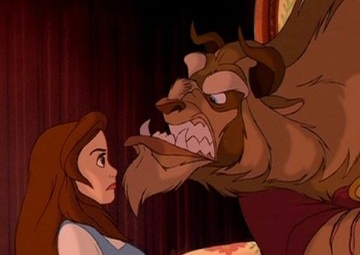 Each night, they have dinner together, and eventually do strike up a friendship. Being the kind girl she is, she is not rude and haughty to the Beast. When he calls himself an ugly Beast, she tells him that that is not so, and that he has great kindness within him. But words can only go so far. When, at the end of each night, he asks her to marry him, she always refuses, with a trembling voice. It is safe to be friends with him, talk to him, and even laugh with him, but still the idea of marrying such a creature strikes fear in her heart. Beaumont tells us that, when Beauty is alone, “…she felt a great deal of compassion for poor Beast. ‘Alas,’ said she, ‘’tis thousand pities, anything so good natured should be so ugly.’”

Part of the reason Beauty so fears marriage, we learn, is that she still has not cut off her ties with her father. Finally, she begs the Beast that he return her to her father for one week. The Beast tells her that a week is all he can allow, for if she is gone any longer, he will die of grief. Beauty promises that one week will be all, and the Beast gives her a magic ring that instantly sends her to her father. But once she is there, she finds that one week is not long enough. Further, her evil sisters keep begging her to stay, hopeful that the Beast will then die. So her own desires to stay compounded with their begging inspires her to remain at her father’s house, but, by the tenth night, she worries about the Beast. She returns to him to find him dying. If only she had not so desperately wished to leave him, and if only she had not stayed away longer than she promised, then the Beast would not be so ill! Once again, the girl is the true Beast, who could not see the good, kind man who loves her so much underneath all that fur and teeth.