–the Queen’s transformation from this… 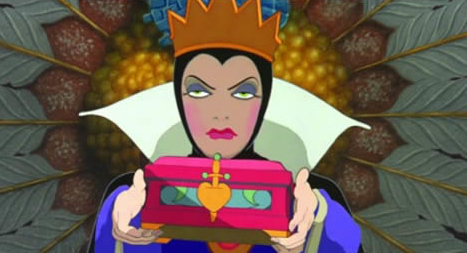 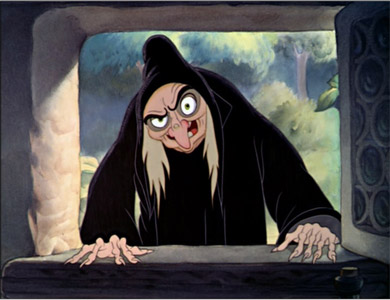 –Snow White biting into the apple and succumbing to the Sleeping Death, and then the frenzied hag’s plunge off the edge of a cliff during a lightning storm, as she’s trying to crush the dwarfs with a jagged boulder–all of these moments aren’t just scary, but intensely so. There’s even an instance of pitch-black comedy, soon after the Queen becomes a hag and runs down to the dungeon and past a cell where a skeleton lies within, the pose indicating that the prisoner was desperately trying to reach a wooden pitcher of water, directly outside of his grasp, before dying of thirst. The Queen gleefully kicks it towards him, maliciously cackling, “Thirsty? Have a drink!” Dark humor regarding dying of thirst? This film is not all cheerfulness and light.

And interestingly, perhaps the only aspect of the film that doesn’t ring as truthfully today is its central character, who is arguably its only genuinely saccharine element. Putting aside the gender politics issues that many old Disney films are often today accused of perpetuating–namely that Snow White’s entire being revolves around reuniting with the prince who she hopes will rescue her, even though they only met for twenty seconds this one time–the character herself, played by Adriana Caselotti with a strangely childish voice and an almost bizarre (to our modern ears) vibrato, sounds practically alien today. Her dialogue also often makes her seem to be a bit of a space cadet, riding on an entirely different wavelength than anyone else in the film.

While I wouldn’t go so far as to say that Walt Disney found her unappealing–in fact, it seems quite clear from the film’s loving depiction of her that he wanted her to be very likable, and based on the zeitgeist of an era that could make a star out of a kewpie-pie such as Shirley Temple, she was likely embraced with open arms by most viewers–it is interesting to note that he and his creative team do seem to realize that she and the prince are the least interesting characters in the film. Most of the running time isn’t taken up by their love story but by the evil queen’s plotting against her and, even more so, by the dwarfs and Snow White’s wild animal friends’ various comedic routines. This is a trend that would continue throughout later Disney films: the titular heroine or hero of the film are often surrounded by sidekicks–many of the talking animal variety–and ostentatiously emotive villains, all of whom get the majority of the best material. As much as the narrative seems to tell little girls that being a princess is the best, the films themselves seem to belie that notion by focusing so much on their more imaginative, free-spirited friends.

In a way, these friends seem to function in a similar capacity to Rosencrantz and Guildenstern in Tom Stoppard’s Rosencrantz and Guildenstern Are Dead, a postmodern rewriting of Hamlet in which two very minor characters are thrust into the forefront of the story, with the main plot happening behind them. In this case, the main show is the Queen versus Snow White, and yet much of the film’s heart and its suspense revolves around Snow White’s friends’ reactions to what is happening. The sequence in which the old hag approaches Snow White, who ignores the animals’ desperate pleas to her to avoid the witch, followed by their frantic run through the forest to alert the dwarfs to the danger she is in and to then bring the dwarfs back to save her, is a masterful blend of suspense and humor. Although we know that Snow White is destined to eat that apple, we can’t help but hope that the animals will be able to reach the dwarfs in time and that they will then all return before she takes that fateful bite. We care about what happens to Snow White, because her friends care so deeply.