When Snow White and the Seven Dwarfs originally went into production, the idea of a cartoon being able to maintain an audience’s attention for more than a handful of minutes was unimaginable to many people, who simply could not accept it as an artform capable of emotionally involving moviegoers beyond a few moments of laughter before the real feature began. The idea of Disney sinking thousands of dollars into creating the film, which took three years to complete and required hundreds of animators, as well as the development of brand-new processes for creating animated visual effects such as realistic-looking running water, fires, etc., seemed preposterous to them. And yet, when it was finally released, Snow White proved to be enormously successful on every level, artistically and financially.

While I watched Snow White last night, I tried to imagine what it must have been like for those original audiences in 1937, who had never seen anything quite like it in the past. Most of us were raised on Disney films. The Disney style has practically become a part of our collective childhood DNA. But the first people to see Snow White had never before devoted 90 minutes to watching moving, hand-drawn pictures come to life before their eyes in a movie theatre. They had never before seen such fully fleshed out animated characters, from the lovely Snow White to the terrifying Queen to the comedic dwarfs, occupying such a lush, meticulously detailed, full-color fantasy world. How amazing must it have been for them to see that POV shot from within the wishing well, as we gaze up at Snow White and her prince through a ripple of water; how frightening to witness the princess’ first nightmarish journey through the darkened forest, or the Queen’s horrifying transformation after drinking the potion? 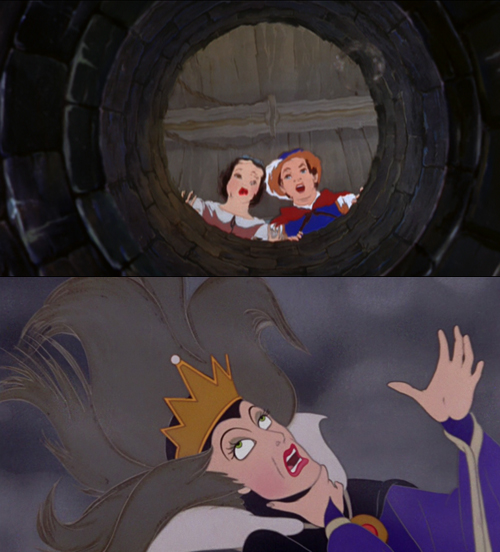 And what might be most remarkable about the film is how well it holds up today. All of the comedy involving the dwarfs and the forest animals is still very funny, including the dialogue-based humor and the slapstick (erm, minus one nearly-blink-and-you-miss-it gag involving Dopey that could be described at best as being fairly insensitive to Asian people). I found myself laughing out loud many times, particularly during the bathing scene when the gang of dwarfs gang up on Grumpy and toss him into the tub, and the fight over the lone pillow when they all agree to sleep on the floor so Snow White can take their beds. It’s pretty incredible that 70 years after a children’s film’s release, an adult can still find its humor fresh and entertaining.

I had also forgotten quite how effectively scary the film could be. Disney films have developed a reputation for making fairy tales lighter and happier than they were in their original forms, but sometimes I wonder whether people who think that Disney films are fully carefree and fluffy have actually seen a Disney film in a long time. Snow White pulls few, if any, punches in depicting the dark aspects of its story, never shying away from moments that young children might find terrifying. The Queen demanding that the Huntsman cut out Snow White’s heart, and her furious reaction to discovering he’d duped her with the heart of a pig; Snow White’s aforementioned, horrifying journey through the dark forest, as she pictures tree branches turning into claws to grab her and logs turning into crocodiles to devour her–