Meanwhile, although the episode can be quite heavy, it also manages to weave in the endless wonder and unbridled invention that characterizes Warehouse 13 at its best. Everything that makes the show great is in this episode. The suspense, the humor, the imagination, the technology, the heart. It shows in the dozens of artifacts that reappear in this episode. It shows in how nimbly the tone moves from the suspense of the new Warehouse agents nearly tracking our gang down to the impeccable slapstick of the group working together with refrigerator doors to knock them out. It shows in the look on the alternate Myka’s face as she starts to realize that she’s found her real place in the world.

Even amongst Warehouse 13‘s high standards, this episode stands out as a real pinnacle. 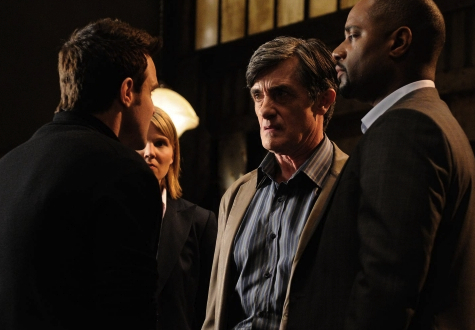 Favorite Scenes: The Rudolph’s nose sequence that opens the episode. The reveal that the original leg lamp from A Christmas Story is now located in the Warehouse. The refrigerator scene. The Ali Baba moment. MacPherson dragging the Christmas artifacts in a big sack, like a demented Santa Claus. The terrifying moment that Pete hugging Mrs. Frederic. The entire thing, really.

Notable Quotables: “You love my Aura! You flirted with my Aura! Leena!”–Pete

“There is no reality in which I would live in South Dakota.”–Myka

Pete: Okay, okay, do the words “warehouse,” “artifact,” and “Univille” mean anything to you?
Myka: No, but “creepy,” “trespassing,” and “federal offense” do.

“Let me be perfectly clear, I know places where people would never find your body.”–Myka

Claudia: What do you want me to do?
Pete: Break into a large depository filled with mystical artifacts located in the South Dakota Badlands.
Claudia: Warehouse 13? I’ve been trying to hack into that place for years.

“Okay, it razzled, I’m dazzled. Now let’s find your brush, my compass, and we’ll get you some courage.”–Claudia

Claudia: Whoa, whoa, wait. This place is heated by a giant furnace heated by the earth’s core?
Artie: You should see the air-conditioner. 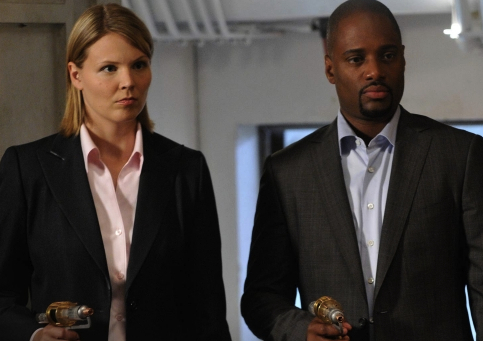 Continuity: Omigod, there is almost too much to list. Pete talks about his mom and his sister, the latter of which he’s referenced many times in the past, and the former of which we will either meet next week or have already seen in a handful of episodes, depending on when you watch the episode. Artie is supposed to go on vacation with Dr. Vanessa Calder, but Hugo Miller and Artie’s father have both inserted themselves in the trip. We last saw Vanessa and Hugo in “Love Sick” and Artie’s father in “Secret Santa,” the prior holiday special. Claudia buys Artie a new jacket, just like she did last Christmas. In the alternate reality, MacPherson is alive and has convinced the Regents that he is reformed (just as H. G. Wells did), and is now its head, while Artie is in jail, because Myka arrested him that first day for attempting to assassinate the President, because Pete wasn’t there to keep that from happening. They even mention the Bloodstone, the artifact Artie had been trying to secure. Artie’s been injected with the exact same poison that earlier made the Warehouse toxic to MacPherson. Later on, he will wear the same necklace of minerals to counteract it that MacPherson did. Later on in the episode, MacPherson will kill Artie for the second time on the series (the first time being in the first season finale, “MacPherson”) and in the same way he himself was killed in “Time Will Tell”. Pete tells Leena that she flirted with his aura, which happened in the pilot. We meet Myka’s mother again for the first time since “Nevermore,” (and see Bering and Sons again, the last time being in “The New Guy”) and learn that her dad died before Myka could reconnect with him. Furthermore, her mother had burned Blue Willow Sky, his novel about Myka before anyone could read it. In this reality, John McCain is president, as we can see from the photo on Myka’s wall. Pete mentions that Myka’s high school crush was Kurt Smoller, who we met in “Merge With Caution”. Claudia is still in the institution, because MacPherson had never contacted her with information on how to hack into Warehouse 13 and therefore she was never able to reconnect with Artie and free Joshua using Rhetticus’ compass, which is also brought up. MacPherson and Mrs. Frederic refer to Shakespeare’s Lost Folio, which played a major role in “The New Guy”. MacPherson uses Cecil B. DeMille’s riding crop on Mrs. Frederic. Sykes will use this artifact in “Emily Lake” and “Stand”. MacPherson bronzes Mrs. Frederic, just as he was bronzed in “MacPherson”. The gang sneaks into the Warehouse via the same entrance through which H. G. Wells was smuggled out in “Time Will Tell”. We learn that it was the original entrance to Warehouse 9, which seemed to be the treasure trove that Ali Baba found. Myka knowing the ancient Arabic is a reference to how much Myka read as a child. Once they enter, Claudia says “Knock Knock,” referencing the phrase she used while hacking into the system. The shot when they all see the Warehouse for the first time is a visual reference to the first time Pete and Myka saw it, the opening credits, and Jinsky’s first view of it. MacPherson uses the Japanese invisibility sword he used in “Implosion”. Pete uses the earthquake-causing stick that he wielded in “Around the Bend” against the new Warehouse agents. Claudia asks Myka to show her a fight move, just as she did after Myka broke the keypad in the first season’s “Meltdown”. Artie walks through a wall to appear behind MacPherson, using the Lenape cloak, which we haven’t seen since the first season’s “Elements”. And just like in the last Christmas special, the episode is framed with a storybook opening at the start of the episode and closing at the end. Phew! I think that’s all.