Hello, everybody and welcome to the Farnsworth Society, where we, as a group, re-watch television shows that are dreampunk, steampunk, cyberpunk, anypunk-related and meet weekly to discuss each episode one at a time. Our first show is the steampunkalicious Warehouse 13 (it only seems fitting to begin the Farnsworth Society with this show, doesn’t it?). Today, we’re covering the eighth episode, “Duped”. And please fill up the comments with your own thoughts, remembrances, favorite things about the episode, absolutely anything. And, yes, spoilers for any other aired episodes from Seasons 1-3 are allowed. We considered making it spoiler-free, but then decided it would likely constrain conversation far too much. Let’s get to it, kids!

“Duped” is one of the episodes I’d been eagerly anticipating since we began this re-watch. From the first moment that Warehouse 13 introduced Lewis Carroll’s looking glass in the second episode, with Pete playing ping-pong with what seemed to be his own reflection, I knew that the show would simply have to eventually feature a plot that revolved around this artifact, so I remember being extremely excited that this finally happened back when this episode first aired. And “Duped” is particularly apropos for Dreampunk, since Alice in Wonderland is basically what inspired this entire site in the first place, not to mention its obvious steampunk connections.

Now, of course, Warehouse 13 puts its own unique spin on the mythology. Rather than being a fairy tale that the young Charles Dodgson wrote to delight a young girl he was very fond of, Alice Liddell in the Warehouse-verse was actually a homicidal sociopath who committed a string of murders before being trapped in the mirror by Warehouse agents. The fantastical dreamworld of the book was actually Dodgson/Carroll’s chronicling of the schizophrenic mind of the young girl as she descended into madness–a fractured twist on Alice, to say the least. 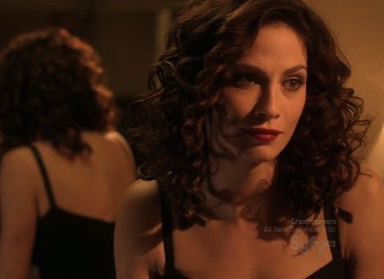 As fun as the Carrollian setup to the episode is, though, the real crux of the episode lies in Myka and the issues she is still having with Artie. Symbolically, her time trapped in the mirror, as Alice has a ball cavorting around in her body–and, really, for any viewers who had only seen Joanne Kelly in the previous Warehouse episodes and might not realize her range, the contrast between her sexy, slinky, dangerous Alice and sad, frustrated Myka, imprisoned back at the Warehouse, is quite remarkable (I also recommend her previous turns as the similarly sexy, slinky, and dangerous vampire queen, Bianca, on the short-lived The Dresden Files TV series, also available on DVD and on Netflix.)–represents a period of psychological retreat, as she tries to cope with the effect that his deceit and the walls he’s put up around himself have on her.

Furthermore, on a literal level, Artie’s initial treatment of her, upon first discovering her image in the mirror, is indicative of his typically distrustful, closed-off, paranoid manner–the very manner that has been upsetting her so much lately. Instead of allowing for the possibility that Claudia raises that it could be the real Myka, he, at first, refuses to even attempt contact with her. He is convinced that she is a malevolent Bloody-Mary-esque siren spirit and won’t even entertain the merest chance that he might be wrong. And when he finally bends slightly, he only does so unwillingly and is so reluctant to accept the truth that he cuts Myka off immediately, hardly letting her get a word in edgewise before severing the link.

Myka sees this as Artie’s greatest flaw. Here is someone who cares very much for him, standing before him and begging him for help, but because he is so locked into his own way of doing things and has become so jaded by bad occurrences of the past, he refuses to alter course and to admit that perhaps he might be wrong; perhaps just because he was previously burned doesn’t mean he will be in the future; and perhaps keeping people you love at at arms’ length because you lost people you love before doesn’t actually prevent future losses but simply sets the stage for similar losses to happen again. Significantly, Artie doesn’t listen to Claudia. After all, she is a relatively new element in his life. He does finally, however, listen to Leena, who has known him longer and therefore knows that it is most effective to let Artie huff and puff for a while before suggesting an alternate idea.

This paves the way for his truly lovely scene with Myka, in which she finally gets to air her grievances with him and he finally admits that his methods were flawed. It is a fantastic follow-up to their scene at the end of “Claudia,” in which they each slightly awkwardly promised to be available when the other wanted to talk. Here, however, there’s no beating around the bush. Being trapped for so long inspires Myka to just let it all out, which as it turns out, is exactly what their relationship needed.

Meanwhile, I always loved that, unlike basically every other male-female investigative partner duo show ever, Warehouse 13 once again reiterates that Pete and Myka are not going to develop into lovers. On another show, that smoldering kiss between Pete and Myka (whether or not it was actually Myka) might have been intended as foreshadowing for their romantic future. On Warehouse 13, however, all it does is prove to Pete that that couldn’t possibly be Myka, because under no circumstances would the real Myka ever have kissed him. Perfection.

Also, although their appearances mostly amount to fairly brief cameos, it’s always fun to see Eureka’s Erica Cerra and Niall Matter as the criminal duo in the episode, particularly given that, on Eureka, Cerra is in law enforcement, whereas Matter actually is a bit of a bad boy on that show, too, albeit a much smarter one. 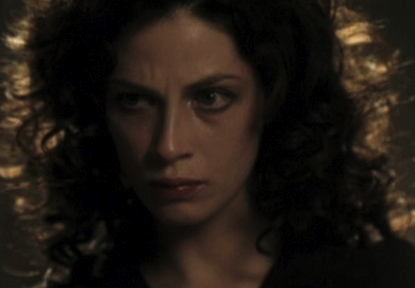 I also love the Studio 54 disco ball and how it interacts with Alice’s mirror. I will say, though, that this is one episode that is much better to watch on DVD than streaming on Netflix. I assume that there was an issue with the music rights, but unfortunately, on the Netflix version (I don’t know about the Amazon Instant Video one), “I Will Survive” doesn’t play when the mirrorball is activated, and Jefferson Airplane’s “White Rabbit” doesn’t play when Alice returns to destroy the mirror, which really is a shame because it undercuts the power of the final sequence. There is an off-kilter energy to the scoring that makes Alice seem all the more unhinged in the original version (thankfully intact on the DVD), and the musical gag of “I Will Survive” starting up yet again, drowning out “White Rabbit,” once they bring out the mirrorball again, makes for a really effective climax to the episode that is severely diminished without the music. I won’t say that it ruins the episode but it does lessen my enjoyment of it, so I highly recommend you seek this one out on DVD rather than renting it on Netflix.

“We do not converse with reflected entities.”–Artie

Continuity: Artie’s arm is still in a sling from his run-in with MacPherson in the previous episode, and Myka is still angry at Artie regarding the events of that episode, as well. Artie’s line about being “pretty hard to kill,” particularly in regards to MacPherson, could be seen as foreshadowing for the events of the first season finale and second season premiere. Speaking of which, the man who survived a fire thanks to the magic poker chip that can show you the future could be seen as thematic foreshadowing for the Phoenix. Also, Myka’s ferret from the pilot is finally referenced again, and here we learn that she gave it a name–Pete (because he is “cute but so annoying”)! This is even funnier in retrospect if you recall that earlier in the episode, Pete claimed to be the one who peed in her shoes, not her ferret. In actuality, “Pete” did! We also get to see the steampunk code-breaking device again that Artie previously used to break into Dickinson’s computer, along with yet another Claudia invention created by mashing up various other artifacts.