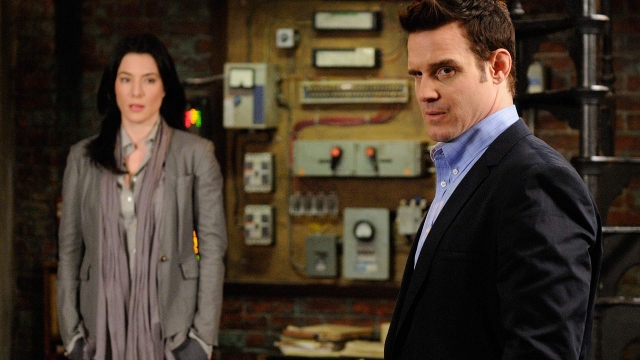 So they do have a happy ending in store, which, at the same time, is their happy beginning (did I mention how much I love “Where and When”?), which tempers the sadness and works as a lovely little metaphor for the idea that life should be lived to its fullest in the moment, no matter what might happen tomorrow. And although in the grand scheme of things, the Jack and Rebecca scenes here may have not added as much to their mythos as the Wells scenes did to hers, it is extremely interesting to see that their initial kiss did not lead to instant bliss for them. It is very in-character for Rebecca to have not instantly accepted they were meant to be, just because she woke up kissing Jack, but instead to have seriously considered their situation before taking the next step. It makes what happens later even more bittersweet, as we now know the two didn’t plunge into the relationship lightly. Watching her make this decision while examining the bronzed Helena (who, at that moment, is an ironic symbol of optimism, as we know that she imagines she’ll wake up into a Utopia) is pure poetry. This episode, perhaps more than any other, really nails the complicated relationship that agents have always had with the Warehouse, knowing that it is a place of wonder and miracles, a sort of home, but also one that can prove dangerous or fatal.

And there is so much other great material in this episode–Pete taking on Artie’s role of last season in his initial distrust of Helena, Myka and Pete continuing to work on their issues caused by Helena’s betrayal, and her genuine apology to them by the end; the extremely clever use of the horn, both as a means of propelling a rocket into space as well as how Daniel attaches it to a satellite dish to amplify its power; the very idea of the shattered space rocket in 1962 leading people to assume that it was alien in origin when it was actually a product of an earlier era in which a rocket would have seemed an impossibility; and last but certainly not least, Pete licking nacho cheese off the Farnsworth. I love that about Warehouse 13–that in such an epic, deeply felt episode, it maintains its identity and its goofy sense of humor. 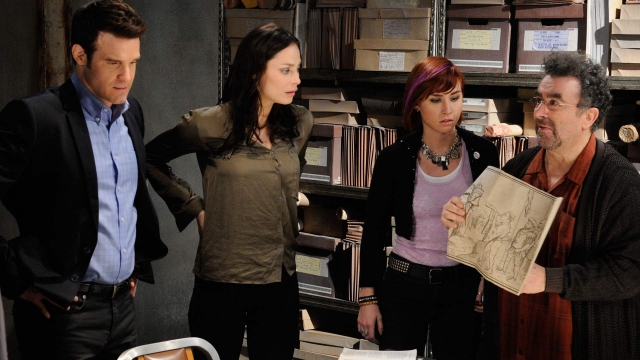 Favorite Scenes: Naturally, the entire Victorian segment, particularly Helena’s sniping at her brother, her relationship with Wooley, and her action scenes. Jack and Rebecca trying to take on the Horn. Pete’s reactions to HG. Pete licking the cheese off the Farnsworth. The final set of scenes (HG/Wooley, Jack/Rebecca, Myka/HG/Pete), which is one of the most gorgeous/heartbreaking sequences in the show’s history.

Notable Quotables: Wolcott: Really, H.G., is there not a man in London whom you haven’t charmed?
Helena: Oscar Wilde, and not for lack of trying.

“I must have started drinking again because the woman who tried to activate a super volcano with a giant fork is standing here and you’re all acting like it’s a potluck.”–Pete

“Yes, just what the world needs a rich, homicidal maniac. You can buy yourself a secret island lair and hire someone to twirl your mustache.”–Pete

Continuity Check: After learning bits and pieces of H.G.’s backstory last season, we get a much larger chunk than ever before in this episode. We also get to see Jack and Rebecca in their most extended sequence yet. When H.G. fights, she’s using a form of karate known as Kenpo, which we learned that she favored back in “Where and When,” when she told Claudia how she knew that she had taken over her maid’s body with her time machine. We also see H.G. use her grappler gun, which she gave to Myka in “For the Team”. The rocket contains an object very similar to Artie’s codebreaker, implying that perhaps H.G. designed it, as well. Thematically, the villain of this episode, a man whose life is forever altered by an artifact, can be seen as foreshadowing this season’s Big Bad, Sykes. Ultimately, however, this man comes to make the right decision, whereas Sykes is forever emotionally destroyed by what happened to him.