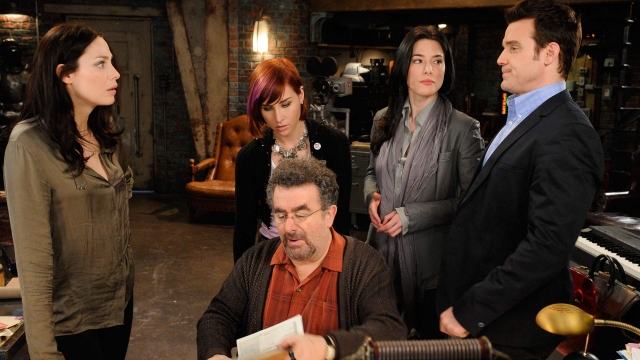 The gang, back together again

These are not the words of a broken woman. They are the words of someone who, despite going through hell, still has hope in the world’s potential. It makes sense that HG would be optimistic, because given all that she has seen at Warehouse 12, she has reason to believe that magic can happen, despite her “time machine” not working the way she had hoped. On some level, yes, HG is likely suppressing the full extent of her sorrow at this point (and I wouldn’t be surprised if she’d already hunted down and killed Christina’s killers by now) and not coping with the fact that Christina is gone forever because she is entertaining a fantasy, but this is something that real people do. And it doesn’t negate the likelihood that her hope is genuine.

This is what makes her explanation to Wooley about how she can go on in the face of her tragedy so touching and so heartbreaking at the same time. In 1893, she truly thinks that the world is on the cusp of great things. She looks forwards to a bright, new future, despite her personal pain. Her lines here succinctly explain what makes the HG we meet in Season 2 tick. In this instant, we learn exactly why she almost did what she almost did. It is one thing for an emotionally shattered woman who lost her daughter to want to end the world, but this is almost worse–despite losing her child, Helena maintained optimism and, in fact, wanted to be bronzed in order to witness first-hand the brave new world that she foresaw, and when instead she discovered a world even worse than the one she left, she felt personally betrayed and sickened. She hints at this in Season 2, when she tells Myka that she wants to return to the Warehouse because she finds herself ill at ease with the world, and of course in her final showdown with Myka in “Reprise,” but this scene crystallizes her character’s pain for me in a manner that brings her entire arc to an even deeper level. Seeing a “happy” HG two years after her daughter’s death hits me in a way that an “evil” HG wouldn’t have.

This scene is given another layer of irony when we consider that HG also told Myka in Season 2 that she agreed to be bronzed after accidentally causing the death of another agent, and at this moment, I can’t help but sadly expect that it was Wooley, her dear friend with whom she shares her hopes for the future here. Perhaps then this is why letting down another dear friend, Myka, is what brings her around again to realize that, although it may seem deeply buried at times, there is goodness in the world and people worth saving. 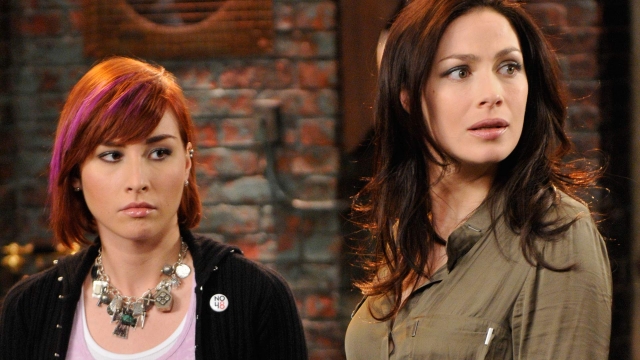 Another thing which my partner pointed out that I had never connected myself before is that, in many ways, HG Wells is the Victorian-era Claudia, in how they are both brilliant, young female inventors who aren’t only awed by artifacts but attempt to come up with new uses for them, incorporating them into the design of new devices. Perhaps this is why Claudia mentions this week that she actually misses HG. She was a strong, brilliant woman who she could look up to, who also made endless wonders of her own. Speaking of which, this also led my partner and me to posit that since we see how HG was smart enough to use artifacts in ways other than how they were originally intended, perhaps when she was first assembling the pieces of the trident in the nineteenth century, she had meant to use it for a completely different purpose, as part of an invention. That would make her attempted use of it to bring on a new Ice Age in “Reprise” all the sadder, because it would be representative of an optimistic thinker truly giving up–taking something originally intended to be part of some marvelous invention and using it to end it all.

Speaking of this mix of happy and sad, Rebecca spends the episode still unsure of whether she wants to carry on a romantic relationship with Jack. Should she allow herself to fully experience these emotions or should she suppress them, knowing the likelihood that their love affair will end badly, as most Warehouse agents lives have ended badly? For viewers, the dramatic irony is even more painful, as we know that Jack is fated to die in the not-too-distant future at the hands of the Spine of the Saracen. Like Helena, Rebecca will lose somebody deeply important to her. On the other hand, due to the beautiful circularity of how last season’s “Where and When” ended, we also know that Jack and Rebecca’s love story is fated to become a perfect, neverending loop. Rebecca will spend years mourning the loss of her one true love, yes, but her last action on Earth will be kissing him–their first kiss, in fact, which sets their romance on its course in the first place. (It’s also lovely that Daniel momentarily confuses Pete and Myka for Jack and Rebecca, not only because Pete and Myka once were Jack and Rebecca but because taking over their bodies is what indirectly led to their romance.)