Hello, everybody and welcome to the Farnsworth Society, where we, as a group, re-watch television shows that are dreampunk, steampunk, cyberpunk, anypunk-related and meet weekly to discuss each episode one at a time. Our first show is the steampunkalicious Warehouse 13 (it only seems fitting to begin the Farnsworth Society with this show, doesn’t it?). Today, we’re covering the third season’s “3…2…1…”. And please fill up the comments with your own thoughts, remembrances, favorite things about the episode, absolutely anything. And, yes, spoilers for any other aired episodes from Seasons 1-3 are allowed. We considered making it spoiler-free, but then decided it would likely constrain conversation far too much. Let’s get to it, kids!

You know a show is doing extremely well when your only vaguely negative criticism of an episode is that you’ve grown to love the brand-new character who was added only a few weeks before so much that you wish he could have been in this one, as well. Jinks’ absence this week is completely understandable, however, because this episode is already so tightly packed that having to accommodate him as well would have been difficult to say the least. As it is, the effortless manner in which writer Bob Goodman and the production team are able to accomplish such epic storytelling in such a relatively brief amount of time in “3…2…1…” is genuinely astounding. We’ve come a long way since the first season, when the series mainly revolved around Pete and Myka. The mythology has become so rich now that we can have an episode such as this, which is composed of three interrelated short stories, each set in a different Warehouse era and linked by a single artifact. Pete and Myka are still the stars of their own show, but this episode reminds us of the vast tapestry of which they are a part in being Warehouse agents and even adds further panels of its own. 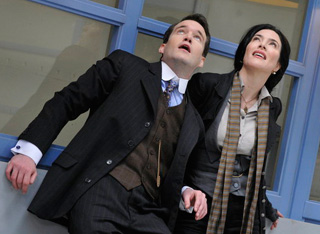 Each of the flashback sequences here is truly stellar, the Victorian scenes finally allowing the series to get its full, unfettered steampunk on, with a tip of the hat to Guy Ritchie’s Sherlock Holmes–oh how I love the idea of Helena as a sort of female Holmes with the fantastic Gareth David-Lloyd (Torchwood‘s Ianto) as her Watson, not to mention the appearance of a Victorian-era space rocket powered by an artifact–and the 1962 sections following up beautifully from Jack and Rebecca’s last appearance, each capturing their times and places with narrative economy and a keen eye for detail. It’s wonderful how the first season’s “Burnout,” which originally seemed to be a standalone episode featuring an elderly Warehouse agent, has led to such rich history and worldbuilding for the series over the course of the subsequent.

And the concept of history–of actions in one era echoing throughout the years, causing a ripple effect that resonates in later ones–is really what this episode is all about. The story of this very dangerous artifact–Joshua’s Horn–and how it manages to slip from agents’ grasps two separate times is particularly fascinating in how it parallels and comments on HG’s journey in multiple ways. On the first level, events that stretch across three separate centuries occur due to a mistake that HG makes in handling an artifact, a running theme throughout HG’s life, both in the objects we know that she will come to mishandle in an attempt to resurrect her daughter, Christina, and in the trident she later uses to try to end the world. On the next level, Daniel–the man who lost his father to the same artifact HG lost in 1893–in his pain and anger, performs actions reminiscent of HG’s in “Reprise.” Of course, there are differences. He is still attempting to bring his father back, whereas when HG wielded the trident, she had given up on the world, but in both cases, someone put a great many people at risk (Daniel had even accidentally killed a number already, as HG had also done, but more on that later) in an attempt to heal their own emotional wounds. 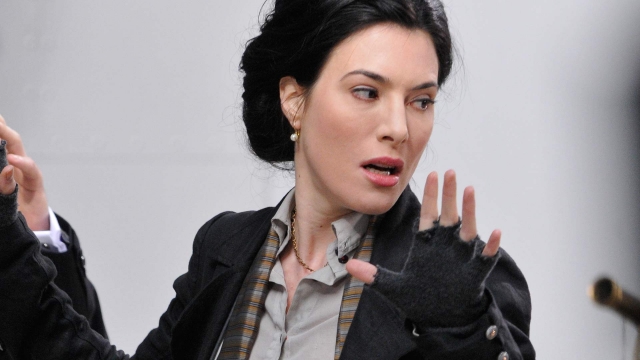 And what is particularly moving about how HG here takes on Myka’s role of talking the person down from causing catastrophe is how HG accepts full responsibility for what has occurred. She doesn’t deflect any blame, and perhaps even takes on more of it than she rightfully deserves. However, it was her responsibility as an agent to bag the artifact and keep people safe from it, and she failed to do that, despite her best efforts, and so from her perspective, her culpability in his father’s death is comparable to the thieves’ culpability in Christina’s. These months of quiet reflection while incarcerated–of realizing the full impact of what she almost did–have truly changed her, as has her relationship with Myka. This episode’s greatest accomplishment for me is perhaps how it reestablishes Helena’s humanity and allows me to understand her on a deeper level than ever before. She may have come close to performing an unforgivable action, but she was never a true, proverbial mustache-twirling villain. In many ways, she is a tragically optimistic figure that the world itself has let down time and time again.

Take her flashback sequence in this episode, for example. One might have expected that, two years after Christina’s death, Helena would have remained in the throes of a fully unhinged, comic book exaggeration of madness. Instead, she seems to remain positive and hopeful, and this is so much more interesting. As soon as I finished this episode, I went back to check out a few key HG scenes from Season 2 to make sure I’d find this consistent with her own description of herself in those years and was impressed to discover that, yes, I did (the only real continuity error is that Christina’s death has been moved from 1899 to 1891, but I assume that was done in order to allow the rumored HG Wells spin-off, should it ever happen, to actually be set in the 19th century). In Myka’s first real discussion with HG about her past, HG tells her that part of the reason she stayed at the Warehouse after her daughter’s demise was because she was working in a place of untold wonder, and surely there had to be something there that could help her bring back Christina.