Another great parallel occurs in the ancient Regent sanctum. Myka, H.G., and Pete facing booby-trapped puzzles together is highly reminiscent of the events in Egypt last season. Last time, however, H.G. cheated her puzzle by simply using her grappler to succeed. This time, however, she plays by the rules, the key to which ironically is to cheat! But in order to figure this out, she has to delve into her memories of her mentor, Chaturanga, and to tap into that optimistic, wide-eyed Warehouse agent she once was. In so doing, she finally begins to remember herself. Those final moments before the explosion are heartrending for so many reasons, particularly Myka and H.G.’s silent goodbye to each other but perhaps most of all because of Pete and Artie’s reactions. After all this time, she has finally proven herself to them and they don’t want to see her go. 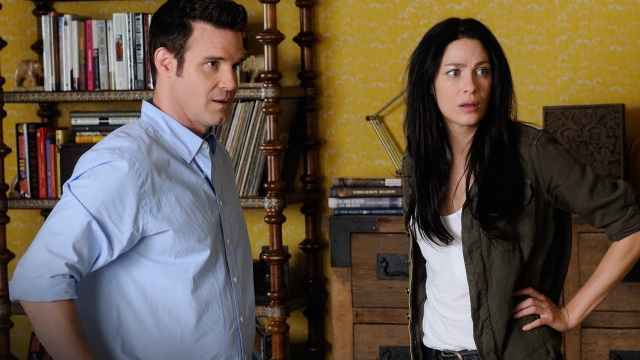 Speaking of which, everything about that final sequence is absolutely breathtaking, from the artifact itself to H.G.’s decision to the cascading explosions tearing apart the Warehouse–some of the best visual effects the series has ever featured–and Mrs. F’s demise. Season finales don’t get more epic than this. Also particularly awesome is that, in the last moment, Artie indicates that it may not be too late to save the Warehouse, while clutching the pocketwatch that MacPherson left him, an incredibly smart move because had he simply whipped that out in the fourth season premiere, fans might have felt it was a cheat. This way, however, we know the device that will be used to save the day before the hiatus even began. And as the season premiere proves, implementing its use isn’t nearly as easy as one might assume.

Favorite Scenes: The Pete cave. The reveal of Emily Lake. The fact that Emily named her cat “Dickens”. The Janus coin flashback, and H.G.’s plea that she get to keep her love of literature. The secret Regent valut in the South Dakota convenience store. The emotionally charged scene in which Myka convinces them that Pete is right about destroying the coin. The devastating final sequence of “Emily Lake”. Mrs. Frederic’s extremely foreshadowy “The Warehouse has always endured, Arthur.” Jinksy’s video to his friends. Claudia’s standoff with Jane. The Chataranga’s Lock sequence. The awesome Pinocchio string effect when Sykes regains his ability to walk. Jane punching Sykes. The final kaboom.

“I’ve known about the Pete cave forever, who do you think keeps it stocked with cream soda?”–Claudia

“Did you just Mrs. Frederic me?”–Claudia 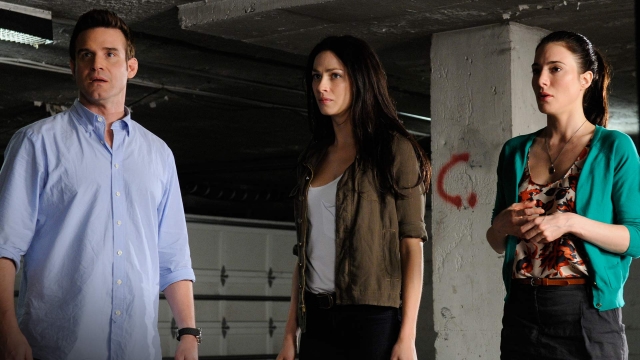 “We are in a Chinese restaurant, Mykes, and I’m not hungry!”–Pete

“I was planning to outlive both of you lunatics.”–Artie

Continuity: After seeing all of Claudia’s twists on the Warehouse technology, in this episode, we finally see her Telsa rifles. We also finally learn just what Sally Stukowski planted on “Stormy Night”–namely, nanites transmitting Warehouse information to Sykes. We get another appearance from Tyler, the hacker that Sykes’ guys enlisted in “Love Sick,” and, of course, Marcus Diamond. This episode also either features the first appearance of Cecil B. DeMille’s riding crop, if you watch the series in airing order, or the second, if you watch the holiday special, “The Greatest Gift” where it chronologically fits. When Claudia is mourning Jinksy at the start of “Stand,” we see a photo of the two of them in their civil war garb from “Queen for a Day”. We get another glimpse of the room archive, when Artie archives Steve’s room from Leena’s, as well as another visit to MacPherson’s room for the first time since “Mild Mannered”. Artie also retrieves the pocketwatch that MacPherson left him in that episode, a pocketwatch that will prove to be enormously important. Jane retrieves an item from the Escher Vault, which we last saw in “Time Will Tell”.