Hello, everybody and welcome to the Farnsworth Society, where we, as a group, re-watch television shows that are dreampunk, steampunk, cyberpunk, anypunk-related and meet weekly to discuss each episode one at a time. Today we complete viewing our first show, the steampunkalicious Warehouse 13 (we already covered the fourth season week-to-week as it aired). And please fill up the comments with your own thoughts, remembrances, favorite things about the episode, absolutely anything. And, yes, spoilers for any other aired episodes from Seasons 1-3 are allowed. We considered making it spoiler-free, but then decided it would likely constrain conversation far too much. Let’s get to it, kids!

The third season of Warehouse 13 will always be remembered among fans as the year when, for lack of a better phrase, sh*t began to get real. Threats in the past might have been dire but they never reached the level of seriousness as the third season’s arc, because we basically always knew it was all going to be okay. At the end of season 1, we mostly figured that Artie would be saved. We knew pretty definitively that H.G. wouldn’t actually destroy the world, because, hey, then no show. As bad as the villains might have gotten, there were certain lines that weren’t crossed. This meant that, as viewers, we felt safe to an extent.

In the third season, however, that finally changed. The villain didn’t just threaten but carried through on his threats. The malevolent Sykes felt dangerous in a way that no other previous threat on Warehouse 13 had. Not only did he hunt down, torture, and actually kill Regents who had recurred since the first season, but he even killed his own people, if they ever either displeased him or he felt that they had worn out their usefulness. There was a brutality to his behavior that we had never seen on the series before and which, particularly from “The 40th Floor” onwards, made for an even more epic story, with much higher stakes than we had ever experienced in the past.

And the true point-of-no-return paradigm shift in the world of Warehouse 13, after which we could never rest assured that everything would be okay again was the death of Steve Jinks at the end of “Emily Lake”. Whether Sykes knew from the start that Jinks was a double agent or Sykes was simply not taking any chances, we do not know, but that makes his actions even worse–how little a regard he has for human life and his willingness to snuff it out at the drop of a hat to further his goals.

The moment where our team discovers their friend’s corpse is one of the most heart-wrenching, brutal character deaths I’ve seen on any show. We don’t see the actual violence, but it is no less difficult to watch because of it. We see Pete’s stunned reaction, begging Claudia not to go up the stairs, and then Claudia’s agonized cry at having lost the closest friend she’s ever had, and Myka’s tears, adding up to what is, hands down, the most potent moment of drama the series produced in its first three seasons. McClintock, Kelley, and Scagliotti have never been better. The entire final sequence of “Emily Lake” is brilliant, a cover of Kate Bush’s “Running Up That Hill” driving the action inexorably forwards from Claudia’s reveal of Steve’s actual allegiance all the way through to the hour’s tragic end.

In many ways, both Claudia and the series lost their innocence in that moment. From here on in, even when the show has a lighter episode, it can never be quite as carefree again. It has, however, emerged an even more complex, absorbing saga because of it, catapulting the show into one of its darkest and meatiest arcs. Characterwise, it’s absolutely riveting, because this tragedy hangs over their heads for the rest of the episode and arguably for a long time to come after it, informing their decisions and actions. Also, unlike the deaths of H.G. and even Mrs. Frederic, it is mostly senseless. H.G. makes a noble sacrifice at the end of “Stand,” and we always knew that Mrs. Frederic was tied to the Warehouse and its fate (though here we get a real sense of just how long she has been its caretaker, based on how much she ages in her final seconds of life). Steve may have ultimately died protecting his friends like H.G. did, but he didn’t have the choice of self-sacrifice that she did nor the dignified final moments nor the chance to say goodbye. And whereas she had to die to save her friends, he didn’t. He could have survived, had Sykes not been a sociopath. 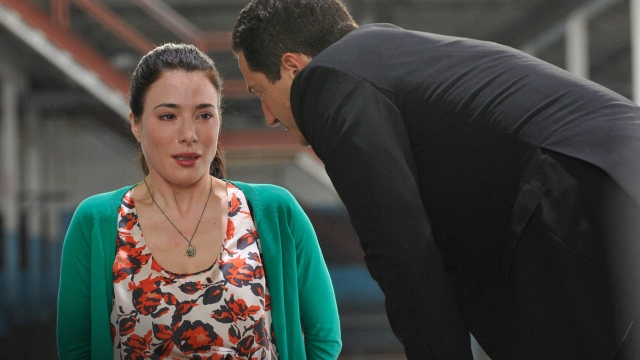 And you can really understand why Claudia is so furious with the Regents and why she lashes out at Jane and Artie. In the past, we have heard villains from MacPherson to Sykes speak out against the Regents’ bureaucratic practices, but it was always difficult to truly take their opinions under consideration because, when push comes to shove, they were the bad guys. Although we eventually saw a bit of why MacPherson was so angry at them, it was after he had already harmed the people we knew and loved. Claudia, on the other hand, is someone we’ve known since nearly the very beginning of the series and it is easy to understand why she feels so deeply betrayed by them. Her anger might be slightly misguided. After all, it was ultimately Steve’s decision to go undercover, and they didn’t necessarily have very many other options, faced with such a frightening threat that had already wiped so many of them, but at the same time, her feelings are fully understandable, and while they may not have personally killed him, they certainly contributed to his death, as unwilling as that may have been.

Moving on to H. G. Wells, Jamie Murray gives another fantastic performance in the dual role of Helena and Emily Lake, the new identity currently occupying H. G.’s body while her consciousness resides as a hologram. Significantly, this is yet another case where, had the Regents been more forthcoming, disaster might have been averted. It’s also fascinating not only because, to some extent the Regents showed a great deal of mercy in allowing H. G. to carry on in some form rather than simply getting rid of her, but also because there is also a bit of unintentional cruelty in the creation of Emily Lake, given that odds were that eventually, she would have to be sacrificed in order to give H. G. her body back. The Regents didn’t seem to ever intend this to be the case, but best laid plans and all that. There is something truly heartbreaking about Emily’s end and perhaps all the more so because H. G. herself worries about this by the end. Both the sacrifice she intends to make near the end of “Emily Lake” and the one she finally does at the end of “Stand” are all the more powerful because of this–because she has finally stopped being selfish. The last time she considered killing herself, she planned on taking the whole world with her, but now she does so in order to protect her friends and to atone for her actions, which makes for a devastating and gorgeous parallel between the end of “Reset” and “Stand”.