Hello, everybody and welcome to the Farnsworth Society, where we, as a group, re-watch television shows that are dreampunk, steampunk, cyberpunk, anypunk-related and meet weekly to discuss each episode one at a time. Our first show is the steampunkalicious Warehouse 13 (it only seems fitting to begin the Farnsworth Society with this show, doesn’t it?). Today, we’re covering the third season’s “The 40th Floor”. And please fill up the comments with your own thoughts, remembrances, favorite things about the episode, absolutely anything. And, yes, spoilers for any other aired episodes from Seasons 1-3 are allowed. We considered making it spoiler-free, but then decided it would likely constrain conversation far too much. Let’s get to it, kids!

It’s always fantastic when a show that you’ve loved for years truly shakes up your expectations and produces an episode that you could have never seen coming. When I first saw it, that was the case for “The 40th Floor,” which takes the show to a level of darkness and personal danger for the characters that was unmatched to date when it first aired (and the season only gets darker from that point on!). From the moment the episode opens on a gutwrenching scene of Theodora, a Regent whom we’ve met in the past, being brutally tortured and ultimately murdered with the Triangle Shirtwaist Factory doorknob by Agent Stukowski, one could instantly tell that it would be an hour of Warehouse 13 unlike any other. In many ways, it’s more epic, high-octane, and climactic than both of its previous season finales combined and with still 4 episodes to go until the end of the season. That first time I saw it, I feared for the lives and well-being of all of the characters, because if the enemy could be this formidable this relatively early, I could imagine the next bunch of episodes being emotionally devastating in all sorts of colorful ways. And, of course, they are. 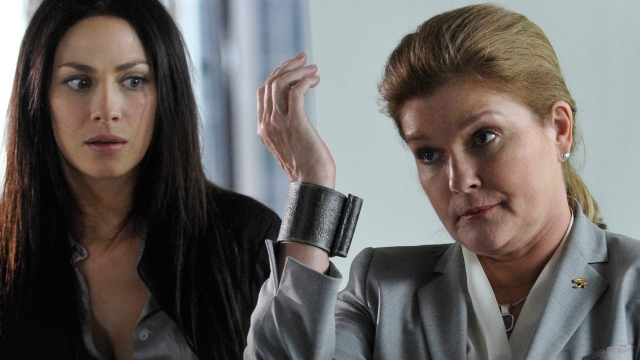 And the episode doesn’t only have the sort of heartpounding suspense most often associated with a season finale but ends on a superb twist that could have been at home in one, as well. The revelation that Jane, the Regent played by Kate Mulgrew (Star Trek: Voyager‘s Captain Janeway), is Pete’s mom is likely the biggest and best surprise the show has unveiled in its past two and half seasons of life (and this, of course means that Pete’s ex-wife is Seven of Nine and his mom is Janeway!). It explains so much. For the first time, we get an indication of how and why Pete was on the Warehouse’s radar in the first place. It seems that each Warehouse agent had a connection to some sort of artifact at some point, unbeknownst to them before being chosen. Last week, we learned that Myka’s former partner and lover died as the result of an artifact; the course of Claudia’s entire life was shaped by Rhetticus’ compass; Artie had been tracking down artifacts to trade with the Russians before becoming an agent; Jinks seems to have been discovered due to his proximity to Hendrix’s guitar, though it’s possible there was an artifact in his past of which he isn’t aware yet, perhaps related to his sister’s death, his ability to detect lies, or both.

Before, it seemed that both Pete and Myka were selected because of Artie and by extension Mrs. Frederic and/or the Warehouse becoming aware of them during their gig guarding the president at the museum in the pilot. Now, however, we know the truth. Myka crossed paths with an artifact, and Pete is the son of a Regent (though we learn in the next episode that she wouldn’t have chosen this life for him).

As far as Pete is concerned, this is also a fascinating opportunity to explore his past, since in the past, we heard of his father who died tragically in a fire after Pete experienced an early bad vibe, and of his deaf sister, who introduced him to comic books (another point of significance and very low-key foreshadowing: the first time we see Pete in this episode, he is wearing an Iron Shadow t-shirt, the fictional comic book character he loved as a child), but never of his mother. She seemed to not have been a major presence in his life growing up, and this is a brilliant explanation. 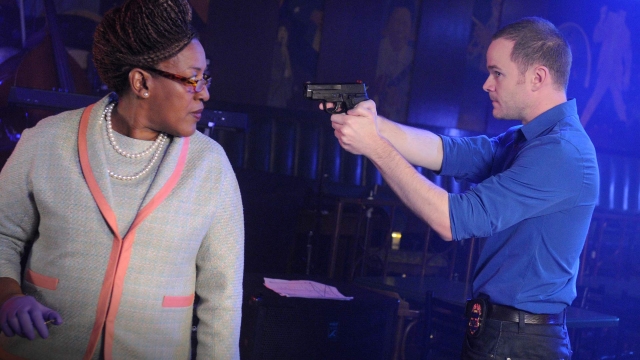 Either way, I already love Jane Lattimer (her first name clearly inspired by “Janeway”). Kate Mulgrew plays her with a similarly kind, wise, yet vaguely prickly gumption that made Captain Janeway such a wonderful character. She is a strong, no-nonsense woman who at the same time is neither humorless nor cold. In many ways, she reminds me a great deal of Myka, with whom she instantly gets along so well. In retrospect, these character commonalities might even partially explain why Pete has been so comfortable with Myka these past few years. It is also interesting to note that, even before we learn of Jane’s true identity, she seems quite well-versed in how to handle oneself when trying to escape a burning building, the result of having been married to a fireman.

Speaking of said burning building, this entire sequence is easily the most heart-pounding in the series’ history, due to the death toll and the fact that the pernicious flames seem to cut them off at every turn. Even under such dire circumstances, however, our characters remain brave and smart, Artie using Frank Lloyd Wright’s son’s pick up sticks to form a ladder, and Jane and Myka using the fire hoses to shimmy down the elevator shaft (not to mention Claudia hacking the henchman’s GPS). The Berlin Wall graffiti can is also an extremely clever concept for an artifact  (and led to some of the best special effects we’ve seen on the show to date), and Pete’s idea of neutralizing the anarchy symbol with a peace sign a truly brilliant solution. I love that with this action he is saving not only his beloved partner but, unbeknownst to him, his mom, as well.