Hello, everybody and welcome to the Farnsworth Society, where we, as a group, re-watch television shows that are dreampunk, steampunk, cyberpunk, anypunk-related and meet weekly to discuss each episode one at a time. Our first show is the steampunkalicious Warehouse 13 (it only seems fitting to begin the Farnsworth Society with this show, doesn’t it?). Today, we’re covering the third season’s “Don’t Hate the Player”. And please fill up the comments with your own thoughts, remembrances, favorite things about the episode, absolutely anything. And, yes, spoilers for any other aired episodes from Seasons 1-3 are allowed. We considered making it spoiler-free, but then decided it would likely constrain conversation far too much. Let’s get to it, kids!

In a season that has been full of fantastic episodes, Ian Stoke’s gamer-infused Eureka crossover episode of Warehouse 13, “Don’t Hate the Player” might tie with the Pete/Myka/Jinks subplot of “Love Sick” as the most purely delightful installment of the series we’ve had this season. We know from “13.1″ that Stokes writes a dead-on-perfect Douglas Fargo and is interested in the interaction between Warehouse artifacts and computers (something which both episodes also happen to have in common with “Love Sick”), and in this episode, he has even more freewheeling fun with the idea, placing all of our beloved characters inside a video game based on Warehouse 13 and which Fargo designed with two other guys. What makes this episode so geekily brilliant is that Fortress 13 isn’t just a magicked-up, tricked-out-fantasy parallel to the world of endless wonder we know and love–although there is plenty of that–but specifically Fargo‘s take on Warehouse 13. And so, naturally, Artie is an imposing, stern guard at the gate, befitting his reluctance to allow Fargo to modernize Warehouse 13′s computer system in “13.1,” and Claudia is a voluptuous princess. Speaking of which, while the entire cast is more than on their game in this episode (no pun intended), Alison Scagliotti practically steals the show, not only beautifully navigating Claudia’s self-doubt and emotional trauma but contrasting that with this hilariously bubbleheaded bobble of a royal. 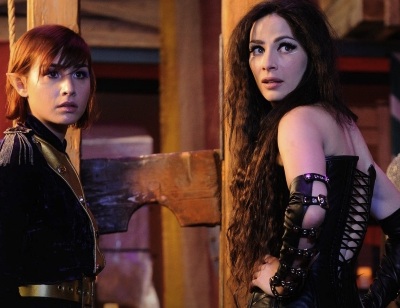 And Claudia’s fears about herself and her capabilities–voiced in earlier episodes, such as this season’s “Trials” and last season’s, “For the Team,” in which she worried about her abilities as an emerging agent–are, in many ways, one of the most important aspects of the episode. All of the dragons and wizards and black towers and winged women are the frosting on the cake–and very delectable frosting, at that–but underneath that, we have this young woman who, despite often seeming confident and blase, is actually quite vulnerable beneath the surface she projects. Although she is brilliantly talented, she keeps to herself and often hides her abilities or laughs them off, particularly the ones that reveal the inner emotions behind the wall she’s built around herself. It is one thing for her to quickly design a system that will allow someone outside of Fargo’s game to communicate with someone within it, but to do a seemingly easier task, such as play the guitar and sing in front of an audience is an act that she fears will leave her naked and exposed. It is the same reason she meekly requests to just be herself in the game. She doesn’t see herself as a superlative being. Pete has the self-confidence to want to be a bare-chested warrior in the game, because it’s all in good fun to him. Claudia has these barriers, though, that undermine her feelings of self-worth, which are directly tied into the time she spent in the mental institution.

Scagliotti completely sells the climactic moments when Claudia’s worst fears are played out before her eyes–the terror that perhaps she is actually crazy and all of these wondrous things that have happened to her over the past few years are actually a dream. The most significant part of these worries, though, seem to spring from the fear that she isn’t good enough–because if she were actually still in the institution, it would mean that she was wrong about her brother still being alive. I particularly love that the appearance of Myka in the game is what inspires Claudia, however, to snap out of it and successfully attack her fears head-on, because Myka is Claudia’s hero in many ways–the strong woman she aspires to be. Myka doesn’t win her battles for her, just as she didn’t do Claudia’s job for her in “For the Team,” but her presence there compels Claudia to action and to once again see that she is capable.

For Claudia, coming into her own is a gradual process. It is one thing to have friends and loved ones tell you that you are worthy, but it is another to truly believe it yourself, and here, Claudia was able to go back to the root of all of those underlying and undermining fears–the institution–and to (one hopes) obliterate them, thanks to the help of her new family. This is why the end of the episode, in which Claudia performs at the coffeehouse, is such an unexpectedly lovely conclusion. Facing her worst fear imaginable and succeeding has shown her how relatively harmless the act of playing music in public would be. Just as Myka inspired her to leave her comfort zone to lash out against her former doctor, at the end of the episode, she takes Pete’s advice from the beginning of the episode to heart and leaves her comfort zone in a different way. 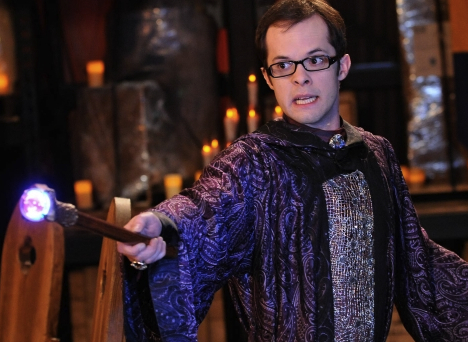 Also of note is how the title, “Don’t Hate the Player,” is reflected across the episode’s parallel plotlines. On one level, of course, it references the phrase, “Don’t hate the player, hate the game,” which puns on the fact that the episode revolves around our characters playing a video game. On the next level, however, that phrase itself can refer to the fact that the Fortress 13 game literally turns on its players. Another example of this beyond Claudia’s institution nightmare is Jerry’s ex-girlfriend, Hannah, appearing as an executioner, in order to represent the boy’s fear of asking her to marry him. In other words, a good person–in fact, a person who one of the players loves very much–appears in the guise of a villain.

The opposite occurs in New York, where the villain who we first met in the season premiere, FBI Agent Sally Stukowski, appears under the guise of friendship but is actually playing Artie and Jinks. In this case, the phrase, “don’t hate the player” would be ironic, or a reflection of Jinks’ trusting her. There is some wonderful irony in the fact that Jinks, the man who can always tell when people are lying to him, falls for Stukowski’s act, which to me says more a great deal about just how formidable the seemingly innocuous Stukowski actually is, and also reveals the loophole in Jinks’ ability. It seems that he can identify direct lies but can’t always detect when people obfuscate by using partial truths. Technically, Stukowski never lies to him. She tells him that she ran away from the scene of the crime in order to evade the police. This is true. She tells him that she wanted to get the painting to a “safe place,” which is also true, although her definition of “safe place” would differ from his. When she tells him she is returning the painting to him, it is also true. It is the painting. Now, it’s not clear if she has tampered with the original or has given them a copy, but in either case, it is “Stormy Night,” which fulfills the requirements of truth, even if she omitted the part about working for what seems to be an evil organization that is out to get them. This indicates that she (a) knows about Jinks’ ability and (b) actually is FBI, for if she were just impersonating an agent, he would have detected it as a lie.