Hello, everybody and welcome to the Farnsworth Society, where we, as a group, re-watch television shows that are dreampunk, steampunk, cyberpunk, anypunk-related and meet weekly to discuss each episode one at a time. Our first show is the steampunkalicious Warehouse 13 (it only seems fitting to begin the Farnsworth Society with this show, doesn’t it?). Today, we’re covering the third season’s “Queen for a Day”. And please fill up the comments with your own thoughts, remembrances, favorite things about the episode, absolutely anything. And, yes, spoilers for any other aired episodes from Seasons 1-3 are allowed. We considered making it spoiler-free, but then decided it would likely constrain conversation far too much. Let’s get to it, kids!

The wonderful fourth episode of Warehouse 13’s third season, “Queen for a Day” is all about history, specifically past events which two of our male leads have been hiding from their female counterparts. For Pete, it is his failed marriage to Amanda, played by geek favorite Jeri Ryan (Star Trek: Voyager‘s Seven of Nine); for Steve, it is the death of his older sister, at a young age. Meanwhile, the episode is structured such that the locations of the two artifacts that our investigative pairs are tracking down are both redolent of history themselves. Pete and Myka follow Amanda to her wedding in what looks like an old-fashioned castle, albeit in the Poconos, while Claudia and Jinksy are mired in a different sort of faux-history, namely a Civil War reenactment, the latter of which is such a perfect Warehouse 13 concept, it’s almost surprising it hasn’t happened before. Of course a re-enactor would have an authentic Civil War artifact, and of course it would make its bearer think he was a famous historical figure from said war. There is no geeky joy more geekily joyful than the sight of Claudia, in full Gone with the Wind-era garb, using her steampunk weapon on a man dressed up as Ulysses S. Grant. Except perhaps the sight of Claudia and Jinks working together so well. Speaking of which, episode writer Holly Harold deserves huge kudos for their Laverne and Shirley squabbling, as well as the fantastic “Mini Tesla” drag name line. 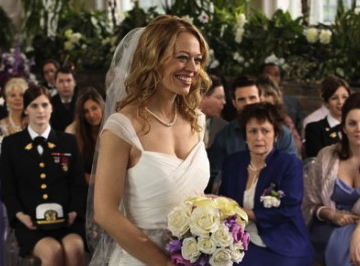 It may not be hugely shocking that, by the end of the episode, both Claudia and Myka will come to learn more about their partners and the secrets they’ve been keeping, but it’s the way these revelations unfold that makes them really special. It’s in how Jinks is beginning to find a new sister in Claudia–a sister who is both big and little sister to him, at once, little in that she is younger than he and yet big in how she reminds him of his older sister, both in looks (and, as we see in the photo at the end, the two share a striking resemblance) and in how selflessly she protects him. It’s in how Artie watches the two of them from the next room as they bond, beaming with fatherly pride. It’s in why Pete never told his Warehouse family about his ex-wife in the first place. A lesser–or, at least, more obvious–show would have made this story an issue of barely concealed subtext jealousy between Pete’s ex-wife and his “new wife,” Myka, but Warehouse 13 doesn’t even raise the merest specter of indication that this has anything to do with romantic attraction between our protagonists. Instead, Pete obscured the fact that he had been married, because he was ashamed of how it ended and the part his drinking played in that dissolution. This is an elegant reveal in how it is so firmly rooted in scattered pieces of history we have learned about Pete, both his alcoholism and his years as a marine, and even more so in how it unites these threads, assembling the pieces of the puzzle that is the Pete Lattimer we know and love today.

The episode deserves even further credit for how it refuses to follow the other proscribed storytelling beats that these sorts of plots usually take. Just as Myka and Amanda are never at each other’s throats, either fighting over Pete or sniping at each other, Amanda and Pete, while they are certainly reminded of the brief, good times they once shared, never go so far as actually being tempted to rekindle their relationship for even the slightest moment. What is so great about the writing, the direction, and McClintock and Ryan’s acting is that these characters feel like real people who once cared for each other very deeply and who still look back on that time fondly but have grown a great deal since then. Often on television shows, when we meet people from our characters’ pasts, they don’t actually feel as if they’ve known each other as long as they are meant to, but with Pete and Amanda, we get a true sense that these are people who share a past, and not an all-together happy one. I love Amanda’s dialogue to Pete in particular, because the Warehouse 13 family’s world can be so insular, it is nice to be reminded again that Pete and Myka had other people in their lives before dropping off the grid, so to speak, people who might still be wondering what happened to them and their careers. 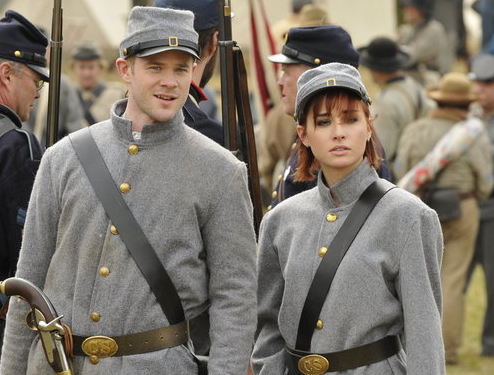 And, overall, the conceit of the episode is enormously fun. The queen bee artifact is exceedingly clever and its affect on Amanda’s wedding party absolutely hilarious. I like that Pete and his new life make their mark on her wedding, reasserting how people’s futures are always determined by their pasts, but I like even more that, ultimately, Amanda is such a good sport about it. She could have been written as an antagonist or as a harridan. Instead, she is a warm person (who is ironically even more badass than Pete in many ways, much like Myka is) who just wanted to revisit her past love one last time to make sure his life was headed in a good direction before she went on her own new path. I love that she uses a rare comic book of Pete’s as an initial excuse to see him, which is yet another aspect of Pete’s character that comes together with the other parts of himself in this episode, as well as another touch that further cements the Warehouse as his new home and life. Last season, Pete didn’t feel fully grounded there, largely due to the fact that not all of his possessions had arrived yet, and Myka began to help ease that transition by giving him another rare comic book. Amanda’s gesture parallels Myka’s, which demonstrates how well both women know him, yes, but is also a comforting piece of the past that helps reaffirm how much he loves his new life, in which he gets to basically live inside a comic book adventure every week. How cool is that?

Notable Quotables: “We’re looking for a flask at a Civil War Reenactment, a place where flasks go to die.”–Claudia

“You know my story. ATF, Jimi Hendrix’s guitar, and the first time I saw Artie’s eyebrows.”–Jinks

“It takes two to screw up a tango.”–Amanda

“Mini Tesla. Dude, that should be your drag name.”–Claudia, to Jinks

Continuity Check: Although we have heard of Pete’s older sister, his alcoholism, and his career in the Marines in the past, this is the first time we learn that he was once married. The Queen Bee artifact that causes so much trouble in this episode is yet another artifact recovered from the remains of Warehouse 2. We learn about Steve’s deceased older sister this week. Pete’s love of comic books surfaces as a plot point yet again, and as previously mentioned, Amanda bringing him a classic comic book mirrors Myka tracking down the first issue of the Iron Shadow. This episode again features the scarab bug burrowing its way through the Warehouse that we’ve seen in the opening credits in the first two seasons and which caused Claudia trouble earlier this season. We also know from past episodes that Claudia is skilled at making new objects from old artifacts. This is the first time we see her Mini Tesla. Claudia also tells Jinks that the Warehouse has a time machine, which we saw in last season’s “Where and When”.