But let’s return to Myka and Pete, the central relationship that requires the most healing in this episode. In the second season finale, “Reset,” Pete seemed completely torn apart by Myka’s abrupt non-farewell, but with the time that had passed between that point and the season premiere, just how personally betrayed he might have felt by Myka slipped my mind. And during “The New Guy” itself, it’s easy to be so focused on Pete’s attempts to convince Myka to return that you forget something that hadn’t occurred to Myka either: that, yes, she needed to forgive herself for misjudging HG, and yes, she needed to return to the Warehouse, but perhaps most importantly, she needed to apologize. I love that Pete doesn’t tell Myka how he’s feeling, that he characteristically laughs off that he’s upset with his typical pop culture gags, because that is so Pete. I also love that the effect that Walter Winchell’s tie clip has on Pete is to cause him to inadvertently reveal his fear of abandonment. Eddie McClintock is magnificent in these scenes. His regression into the young Pete so pure, sweet, and heartbreaking, and Joanne Kelly is equally enormous–here and throughout the episode. She is always wonderful, but this is easily her best performance on the series to date. Both of them made me tear up repeatedly. 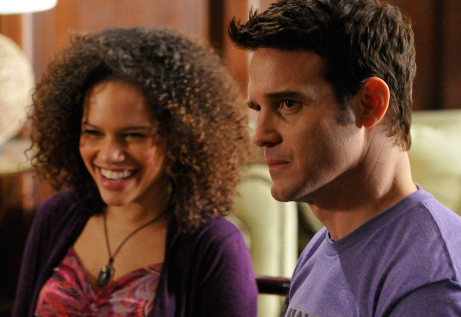 And speaking of Pete as a child, I have to applaud the series for its use of continuity and character history to mine greater depth from the episode. Pete brings up his dad, whose death when Pete was a young boy, which of course hugely impacted who he became as a man, hasn’t been brought up in a long time (I’d like to say the jail-set episode from the first season, but I might have forgotten a second season mention). And with Jinks, Claudia briefly alludes to her time in an institution, which might not have been alluded to since the first season’s marvelous “Claudia” (also penned by the writer of this episode, Drew Z. Greenberg) which introduced her character.

And while I am gratified that the show remembers its past, I am just as happy that it is ever changing, ever evolving. I believe that this was the first episode to be split between two entirely different though thematically-linked artifact-gathering missions. (Notice how both artifacts were ones which a perpetrator ultimately used to take something away from someone, for what he or she believed to be his or her child’s own good? The janitor took his son’s cancer, while the mother was trying to spare her son a jail sentence by taking people’s memories. (And how great was the irony that Walter Winchell’s tie clip was used against a journalist?) They were trying to protect their children, just as Artie was trying to protect Claudia, and Myka was originally trying to protect Pete, the others, and the world at large by leaving.) I love that the cast has expanded to the point that there are various interchangeable possibilities for group team-ups now.

Some shows that focus on a team of two investigative partners never have a regular cast besides those two, and I love that although Pete and Myka are the focal point of the show, that there are all of these other different available combinations, as well. And that all together, they make up one big, happy family, which happens to be my all-time favorite television trope: the gang of misfit toys who eventually create their own family of friends. And Warehouse 13 does this better than most. The artifacts might be fun–genius, even–but it’s the show’s characters that really make my heart go pitterpat. 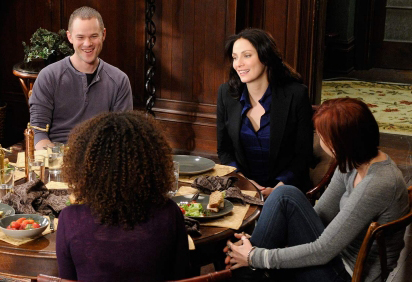 Favorite Scenes: Jinksy’s reaction to his assignment. Claudia’s reaction to learning Steve is gay. Artie “checking up” on Claudia. Childlike Pete’s scene with Myka, talking about the “recent” death of his father. Myka vs. the Garbage Disposal. Myka’s trial with the Regents.

Notable Quotables: “Oh, sure. The good kind of spying. Like here have some flowers, and a puppy, and some spying.”–Claudia

Continuity: We have seen all of the Regents at the trial in previous episodes. Adwin Kosan (Faran Tahir) first appeared in “Vendetta,” while Theodora Stanton (Paula Boudreau) and Lok Archer (whose real name is the same) both appeared at the cafe in the first season’s “Breakdown”. When Pete thinks he is a child, he discusses his father’s death, a piece of backstory that has surfaced throughout the seasons. Significantly, we learn why his mom is so unavailable to him later in the season. When Artie mentions to Claudia that a Regent has died in a boating accident, it’s a subtle first reference to many more Regents deaths that will occur over the course of the season. Myka is also, of course, still dealing with the fallout from her decision at the end of “Reset”. And we have yet another bifurcated artifact, the first of which showed up in the first season’s “Nevermore”. Claudia also  mentions her time spent in an institution, an issue that came up in her first appearance but not often since then. It will recur again this season, particularly in “Don’t Hate the Player”.