Hello, everybody and welcome to the Farnsworth Society, where we, as a group, re-watch television shows that are dreampunk, steampunk, cyberpunk, anypunk-related and meet weekly to discuss each episode one at a time. Our first show is the steampunkalicious Warehouse 13 (it only seems fitting to begin the Farnsworth Society with this show, doesn’t it?). Today, we’re covering the third season’s “Trials”. And please fill up the comments with your own thoughts, remembrances, favorite things about the episode, absolutely anything. And, yes, spoilers for any other aired episodes from Seasons 1-3 are allowed. We considered making it spoiler-free, but then decided it would likely constrain conversation far too much. Let’s get to it, kids!

To some, Warehouse 13 might seem to be a silly little trifle about magical objects, filled to the brim with geek and pop culture references, and goofy humor, but they’re not playing close enough attention. Because not only isWarehouse 13 one of the most joyfully inventive, endlessly creative works of the imagination to cross our humble American TV screens since Pushing Daisies, it also has some of the best character writing to boot. And never has that been more beautifully spotlighted than in “Trials.”

There is so much to love about this episode from a character perspective: Myka’s hesitancy to rejoin the family she had abandoned, Pete’s personal hurt at her departure, Claudia’s bonding with Jinksy aka The New Guy and her fear that she isn’t good enough to carry a mission on her own. The title, of course, works on numerous levels. This is an episode full of trials. On the most literal level, we have the upcoming trial to determine who killed the waitress, a trial whose witnesses have been losing their memories, but there is also Claudia’s trial to prove herself to Artie but even more importantly, to herself; Pete’s trial to deal with the reintroduction of Myka into his life; Myka’s trial to reacclimate herself to the Warehouse lifestyle; and the meta trial we don’t learn about until the end–that of the Regents determining whether Myka is fit to return to active duty. 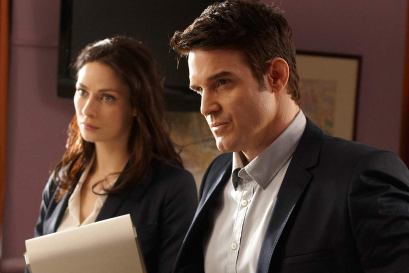 That last one in particular is a truly elegant reveal. At the start of the episode, we hear a voiceover from Myka expressing her concern about how willingly the rest of the team will welcome her back. She peers in from the outside, watching Artie, Pete, Leena, Claudia, and her replacement, Steve, eating breakfast, with no place setting for her, until Leena pulls up a chair for her and she realizes that she hasn’t been forgotten. It is only at the end of the episode that we realize that this voiceover–and the entire episode, in fact–were part of Myka’s hearing to be reinstated. After this trial’s successful conclusion, Myka rejoins that same breakfast table with her recently formed but no less loving family, the two scenes acting as lovely bookends to one another.

What is perhaps most significant about this scenario is that, in the end, it isn’t really the Regents who decide that Myka is ready to return but Myka herself. Over the course of relating her story to them, she realizes the truth. Just as it was her decision to leave, it is her decision to return. I love that she is the one who connects that, yes, someone who is good enough to make that crazy shot and clear-headed enough to even think of doing it is ready to be back. I also must add how much I love her whip-smart thinking in that situation, as well, because in a tense moment, she acted with her brains, not just her gun, and in a way that led to a genuinely surprising twist on the norm for that sort of scene. Instead of the woman simply being swayed by her son talking her down, Myka defuses the violence herself by subverting a tool of violence, and it’s an important moment for her. I also have to say that before viewing the episode, when I first heard that Myka would be tested by the Regents, I was expecting the series to go the traditional route of having a big, bad inquisitor grill her and question her every move, not unlike the Regents did to Artie in the first season’s “Breakdown,” and instead, how this actually transpires is extremely refreshing. I wasn’t expecting it, yet it makes sense. There is no denying she’s a great agent. The only person who ever questioned it was Myka herself. 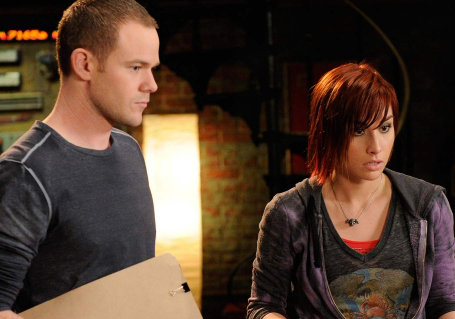 Myka’s lack of faith in herself is then paralleled with Claudia’s arc. And much as with Myka, the only detriment to Claudia’s success is Claudia. Artie shows up at the worst possible moment to check up on her, as it is at her precise moment of greatest doubt about herself and her own abilities, but she misreads his actions. As Jinks tries to explain to her, she doesn’t have to worry about being worthy. She already is worthy. She has worked at the Warehouse for a while now, and Artie has entrusted her with her first mission. That proves it. Artie, after all, isn’t one for either being open with his emotions or sending people out in the field who aren’t competent enough to be there. Artie’s closed-off nature is part of the problem, as well, because it leaves Claudia to interpret his appearance as being out of either disapproval or distrust, when in actuality it is pride. Whether or not either of them will admit it, he thinks of her as a daughter and he is showing up just as any slightly overbearing but loving dad might show up to his daughter’s first day at work.

As usual, Alison Scagliotti is golden in these scenes, and her developing chemistry with Aaron Ashmore is sublime. I love the casual way that Steve’s sexuality is revealed and her oh-so-Claudia embarrassment at having assumed he was coming on to her. (And I must give props to Syfy for facilitating the introduction of a gay character on their most successful original show in their history, and to Warehouse 13 for doing it so matter-of-factly and not having Jinks’ character revolve around it. This is exactly the type of queer representation that television needs.) Jinks keeps things close to his chest, like Artie, but he’s also more intuitive about peoples’ motivations and emotions, which makes him a fascinating mix. In a way, he’s a blend of Artie, Pete, and Myka. Like Artie, he keeps his cards close to his chest. Like Pete, he has a special level of perception. Like Myka, he takes his job very seriously and at first chafes against the idea of doing “boring” artifact-collecting.