Hello, everybody and welcome to the Farnsworth Society, where we, as a group, re-watch television shows that are dreampunk, steampunk, cyberpunk, anypunk-related and meet weekly to discuss each episode one at a time. Our first show is the steampunkalicious Warehouse 13 (it only seems fitting to begin the Farnsworth Society with this show, doesn’t it?). Today, we’re covering the second season’s holiday special, “Secret Santa”. And please fill up the comments with your own thoughts, remembrances, favorite things about the episode, absolutely anything. And, yes, spoilers for any other aired episodes from Seasons 1-3 are allowed. We considered making it spoiler-free, but then decided it would likely constrain conversation far too much. Let’s get to it, kids!

You might be wondering why I’ve chosen to cover “Secret Santa” this week instead of after the second season finale, where it originally aired. The reason is that, in its original spot, it interrupts the cliffhanger ending between “Reset” and “The New Guy,” and although that worked fine when it first aired because of the months in between each episode, it flows much better back-to-back when watched chronologically, and this is the spot where it fits in. The reason is it has to happen after Artie nearly falls victim to Mata Hari’s stockings (since Claudia puts them on a shirt) but before H. G. returns to their lives for the rest of the season, beginning in the next episode. So, logically, this is the place it fits.

Warehouse 13‘s first holiday episode is a fun, cheery, and even a bit gleefully twisted Christmas treat, which nicely contrasts with the following year’s “The Greatest Gift,” which goes quite a bit darker, befitting the darker place the series is in at that point. Above all else, however, this episode is about family, both the one you were born into and the one you made yourself.  Thematically, this celebration of the Warehouse 13 family worked in its original placement because it hinted at what Myka would soon after realize in the third season’s “The New Guy” and “Trials”–that this is where she really belongs. 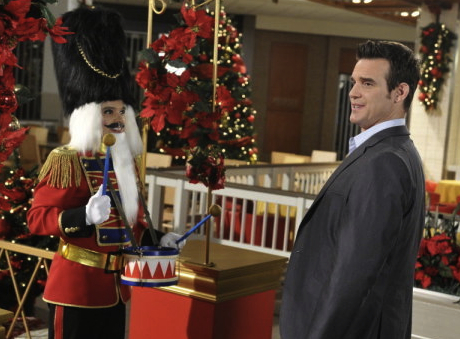 Pete and a nutcracker

Interestingly, though sci-fi team shows tend to uphold the family you create yourself above the one you were born into (likely because many geeks find themselves not connecting with the families that brought them into the world), “Secret Santa” is as much about healing the rifts between estranged family members as it is about cultivating the newer relationships. What I love so much about the way the plot transpires is that, while a large portion of it revolves around Artie finally reuniting with the father he hasn’t had contact with in a vast number of years, the reason these wounds finally heal are due to Claudia, who happens upon Artie’s dad while trying to find him the perfect present–his childhood piano.  In other words, a member of Artie’s new family helps lead the way to sealing the rift with his birth family.

There is also some nice irony in the fact that Artie is the one Claudia blamed for many years for separating her from her brother, Joshua. He is also, however, the one who helped reunite her with him as well. She is now repaying the favor. It is no coincidence that Joshua appears in this episode, as well, from a symbolic perspective. Claudia has made Artie her surrogate father of sorts, to his begrudging reluctance, and it is both fitting and touching that she bring his father back into his life, in her uniquely Claudia manner–busybodyish yet lovable.  I love how much Artie and his father (played with equal parts sensitivity and curmudgeonliness by the legendary Judd Hirsch) are alike, despite themselves, and I love how realistic their reconnection is, not to mention how steeped it is in the history of the show.

The episode then parallels Artie and his dad with the “artifact of the week” plot, which centers on a high-powered corporate executive, Larry, who has been ignoring his daughter lately whilst in pursuit of money and greed. As the episode begins, we find him being terrorized by what seems to be a malicious Santa Claus, who threatens him with erasure if he fails to become a better person by Christmas, like a very nasty Ghost of Christmas Whatsit. This Santa turns out to be an alternate version of Larry himself, one who claims that he will be the caring dad that his little girl, Callie, needs so badly. This punishing figure, however, seems far more malevolent than the real Larry, whose wrongdoings are the result of a lack of effort on his part rather than cruelty. The artifact-conjured-up “Santa Larry” may think he has the girl’s best interests at heart, but what she needs is her real dad, not a wish fulfillment version to replace him. “Santa Larry” reveals himself to be a three-dimensional embodiment of “Be careful what you wish for.” 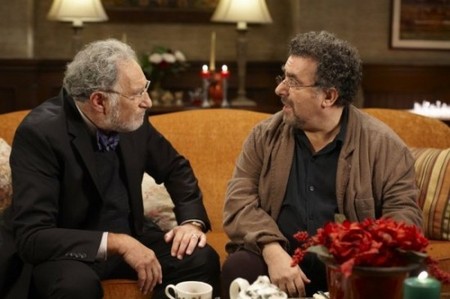 Artie and his dad

Guest star Paul Blackthorne, who has been sorely missed on Syfy since long before the spelling of the channel’s name changed and he was star of The Dresden Files, does a fantastic job of bringing both the weak Larry and the intimidating Santa Larry to life and making them distinctive. (Incidentally, this episode also marks a fun reunion between Blackthorne and Joanne Kelley, who played the sexy vampire, Bianca, on Dresden.) What is most nifty about the two plots is that the defeat of the monstrous version of Larry parallels the metaphorical dragons both Artie and his dad have to slaughter in order to recover from the hurt they have each inflicted upon one another in the past, to pave the way for a new relationship in the future. In many ways, Artie and his father’s relationship is just as new now as the family that Artie chose (or that chose him, more precisely), and this episode cements the fusion of both.

From start to finish, the episode is an utter delight, indulging in holiday cheer, even as it cheekily tweaks it in the form of the bad Santa and his bag of naughty tricks, including malevolent toy soldiers. I love the insult added to the injury that not only do Pete and Myka have to work on Christmas, but they have to do so in Los Angeles, one of the least Christmasy places imaginable. I love the artifact t-shirts Claudia makes for the gang. I adore the holiday-infused opening credits, the storybook pop-ups at the episode’s start and finish, and the commercial animations.  This episode was obviously made with a lot of love on the part of its entire creative team, and it shows.