Hello, everybody and welcome to the Farnsworth Society, where we, as a group, re-watch television shows that are dreampunk, steampunk, cyberpunk, anypunk-related and meet weekly to discuss each episode one at a time. Our first show is the steampunkalicious Warehouse 13 (it only seems fitting to begin the Farnsworth Society with this show, doesn’t it?). Today, we’re covering the second season’s penultimate episode, “Buried”. And please fill up the comments with your own thoughts, remembrances, favorite things about the episode, absolutely anything. And, yes, spoilers for any other aired episodes from Seasons 1-3 are allowed. We considered making it spoiler-free, but then decided it would likely constrain conversation far too much. Let’s get to it, kids!

With its awesome, earth-shattering events, “Buried” practically hurtles the show to its second season finale, reversing its title by uncovering vast portions of series mythology heretofore unknown, revealing truths and secrets galore. Before plunging into a discussion of the Warehouse-specific mythology revealed and/or hinted at in this episode, let’s take a moment to appreciate the gorgeousness that is Jamie Murray’s performance as H.G. Over the course of the season, the writers and she took a role that could have been either a one-note gag or a simple, (proverbial) mustache-twirling villain and gave her emotional verisimilitude and depth. In the end, her betrayal of Pete and Myka may not be completely surprising–it would be hard for a discerning viewer to ever have trusted her fully–but at the same time, one can truly believe that it does pain her to do so, because she sells her sorrow and torment regarding her daughter’s death so beautifully.

In this episode, her reaction to losing her daughter all over again when the vision is shattered (not to mention her bonding with the young girl earlier on), is absolutely heartbreaking. We understand her agony and so can sympathize with what drives her to perform her actions, even if not necessarily forgive them. One also has to give the writers and her props for never making her dour or grim, mining fantastic humor from her anachronistic nature, such as her hilarious Lara Croft get-up in this episode. Kudos also for the definitive acknowledgment that her flirting with Myka was not only meant to be homoerotic on a subtextual level, when it is revealed that just “some” of her lovers were male. 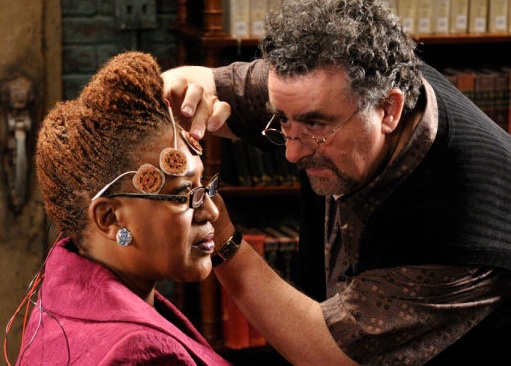 And now, let’s discuss some of the things we learn in this episode, shall we?  What is so nifty is how much is implied by what amounts to a relatively small amount of dialogue. Just a few little hints, however, have the ability to provoke hours of debate. Let’s start off with the fact that we learn that the Warehouses are alive, at least to an extent, and each bonded to a “caretaker.” Mrs. Frederic is Warehouse 13′s caretaker. When Warehouse 2, which had been considered lost for centuries, begins to “wake up,” it seeks a caretaker and, not being able to find its own (she or he died ages ago), reaches out to Mrs. Frederic, thus threatening to overtake her brain with too much information and therefore kill her, her connection to Warehouse 13, and Warehouse 13 in the process. This is an enormous amount to take in. For starters, as far as I recall, this is the first time it is ever acknowledged just how long Warehouses have been around. Earlier on, it seemed that the Regents were somehow an American governmental institution, but this new information implies that the reason they can operate on a higher level is that they predate the American government by millennia.

Now, let’s move on to other things we can infer or at least guess from this information, related to the seemingly symbiotic nature of the caretaker/Warehouse relationship. It seems that Mrs. Frederic has a vast archive in her brain of the Warehouse and its goings-on (reminiscent of the bond between the living Leviathan ships and their Pilots in Farscape), which makes sense, as it explains how she often seems to know things at the same time as or before the other agents. But does it also explain her longevity and powers? Is it possible that when one becomes bonded to a Warehouse that one lives as long as that Warehouse, and is granted certain abilities, or does Mrs. Frederic’s correction to Artie regarding the year Warehouse 2 was buried indicate she’s much older? It makes one wonder how the Warehouses originally came to be. Is there some form of magic or mysticism involved in their creation? How long have the Regents (as an institution) been around? Did they create the Warehouses or did the Warehouses somehow call out to them? How did Mrs. Frederic become a caretaker in the first place? Was she a Regent first? 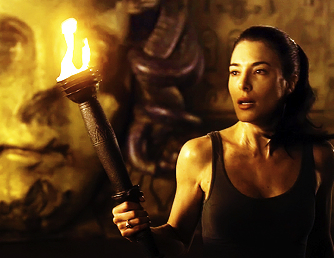 Moving on to Warehouse 2, how wonderful is its design?  Before arriving in the main warehouse, each booby-trapped room along the way brings with it more and more references to Indiana Jones and the similar Egypt-flavored adventure serials that inspired it, and then there is the warehouse itself, which is such a clever visual melding of the basic layout of Warehouse 13 but infused with an even more retro, ancient Egyptian aesthetic. The primitive “light switch,” so to speak, is a dazzling effect, and the night sky “power switch” with ankh key is yet another demonstration of just how much fun this production team must have. I also loved the peek inside the pyramid inside Warehouse 13, as well as the great job the composer did of blending the Warehouse 13 theme music with a Middle-Eastern blend for that shot. Incidentally, this is arguably the first episode ever to not feature an artifact. Instead, this week’s artifact, so to speak, is an entire Warehouse.

I’d also like to talk about the tests that the gang had to face, because how each one was solved was very interesting. As far as the body and soul tests, Pete and Myka surprised one another by switching roles, in many ways, to their surprise. Pete is usually the one who is all about vibes and feelings, whereas Myka deals in logic and facts. This time, however, Pete is the one to figure out the more intricate puzzles, whereas Myka cracks the test that is about feelings. On one level, this hints at the fact that, working so closely to one another all the time has caused the two to influence and rub off on one another.  On another level, what’s interesting is that how they draw their conclusions is still rooted in who they are as people. Pete thinks back to a game of his from childhood to solve the mystery of the plummeting ceiling, and then thinks again to his youth and his bond with his dad to solve the astronomy mystery.  Again, Pete is getting in touch with his more carefree, innocent side to save the day. Meanwhile, Myka on the one hand, yes, gets an odd vibe from her fantasy version of Artie, but on the other, her realization does spring from her paying attention to detail. She knows that her Artie doesn’t behave like this, and the inconsistency rankles her. Furthermore, she notices the red light in a scene otherwise sepia-toned. And then there is the “mind” puzzle, which H.G. Wells “solves”…by cheating, which says a great deal about her character while foreshadowing her betrayal of them. After all, intentionally or not, her actions lead to Valda’s death.