Hello, everybody and welcome to the Farnsworth Society, where we, as a group, re-watch television shows that are dreampunk, steampunk, cyberpunk, anypunk-related and meet weekly to discuss each episode one at a time. Our first show is the steampunkalicious Warehouse 13 (it only seems fitting to begin the Farnsworth Society with this show, doesn’t it?). Today, we’re covering the second season’s “Where and When”. And please fill up the comments with your own thoughts, remembrances, favorite things about the episode, absolutely anything. And, yes, spoilers for any other aired episodes from Seasons 1-3 are allowed. We considered making it spoiler-free, but then decided it would likely constrain conversation far too much. Let’s get to it, kids!

I was especially excited to revisit “Where and When,” because it is one of my all-time favorite episodes of the series to date. Possibly my absolute favorite.

It’s fitting that this week’s artifact is directly related to the “real”  Cinderella, because “Where and When”‘s last few moments are so very fairy tale. There’s a beautiful circularity to the entire episode, which utilizes past continuity in a manner that illuminates both earlier and present events, which is not surprising since one of its co-writers is Drew Z. Greenberg, who has always excelled at this.

Last season, when we first met former Warehouse agent Rebecca St. Clair in the episode, “Burnout,” she told Pete and Myka how much their relationship reminded her of that which she had with her partner, Jack Secord. Jack even used to get vibes like Pete. And in this episode, Pete and Myka travel back in time to 1961, taking over Rebecca and Jack’s bodies for twenty-two hours and nineteen minutes. What is so neat about this isn’t only that Pete and Myka are literally becoming the very couple to whom they were compared, but that there is the intimation that the reason Jack and Rebecca’s relationship became romantic in the first place may very well be because of Pete and Myka. The episode follows time travel paradox rules to a T. In other words, their journey back in time had to happen, because it already did. In 1961, Jack and Rebecca, bickering partners who seemed to outright dislike each other, blacked out for nearly a day and woke up to find themselves kissing one another. The writers play a neat trick here, as throughout the episode, these words might cause us to wonder whether Pete and Myka are the ones to initiate the kiss. Will they themselves discover feelings for one another over the course of the mission? 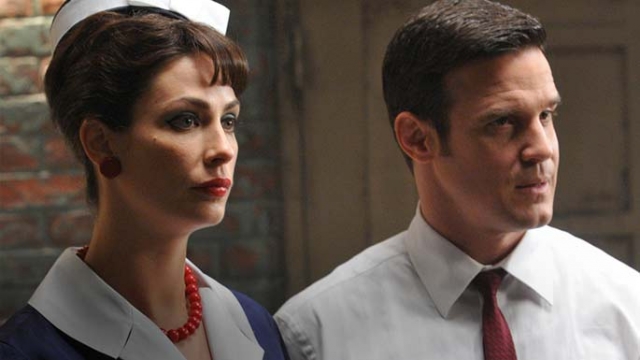 As it turns out, this doesn’t come to pass, and yet in a roundabout way, their “excellent adventure” (love you, Claudia) is what ultimately leads Rebecca to initiate her romance with Jack. To wit, if Rebecca and Jack hadn’t been taken over by Pete and Myka, Rebecca wouldn’t have, in the future, encouraged them to use the time machine to go back and then used it herself to kiss Jack, thus beginning their romance. Wibbly wobbly timey wimey. The other gorgeous bit of circularity in the episode is that Rebecca’s story with Jack both begins and ends at the same moment in time. When we see Rebecca and Jack triumphantly kiss at the end, we might pause and think how deceptively happy this scene is, for we know in truth that their love is doomed. He will die, the victim of the spine artifact, and she will spend the rest of her life mourning him. At the same time, Rebecca does have a happy ending. Her last moment on Earth will be kissing the man she loves and for whom she has waited for so many years. And as I already said, it is this same kiss that starts her love story in the first place. Wibbly wobbly timey wimey. Fact: I am physically incapable of watching this scene without bawling.

The other most clever aspect of the episode is Rebecca’s misinterpretation of the last line of Jonah Ross/Rate’s obituary: “If you’re still out there, Jack and Rebecca, thanks for my life.” From Rebecca’s perspective, this villain, up to the end of his life, was still taunting her for whatever he did to make Jack and her black out, thus allowing him to escape. As we learn, however, Jonah didn’t kill those women, after all, and he is actually genuinely thanking Jack and Rebecca–though, technically, it was Pete and Myka–for helping him flee to safety. But of course, in the grand scheme of things, he actually does owe Rebecca thanks as well, for if she hadn’t, in 2010, come to Pete and Myka, they never would have traveled back to 1961 to save him in the first place. This episode plays a number of very intelligent writerly tricks and also contains a number of shrewd parallels to our protagonists’ current situation. After all, this is an episode in which we discover that someone who “history” had labeled as a villain turns out to have been innocent, after all. This is, of course, extremely similar to what H. G. Wells claims of herself. It is also fitting that an old Warehouse agent arrives and sets in action a course of events that proves this man innocent in H. G.’s first full episode as a fully fledged and reinstated agent. 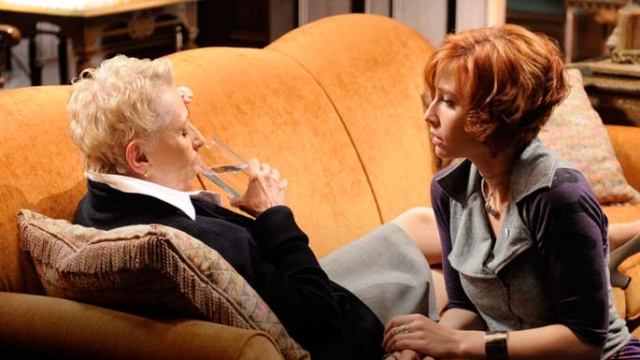 There’s even more to the cool parallels, however, because despite H. G.’s seemingly sincere words and protestations of innocence, we don’t know for sure at this point that she is telling the full truth (she is not). Even if she isn’t, there is certainly a dark side to her. Her words to Claudia about the worst pain imaginable not being her pain at losing her child but that which the people who killed her suffered when she got her hands on them are understandable but absolutely chilling. This is also probably Jaime Murray’s most brilliant moment of acting on the series. H. G.’s pain is stripped bare here, and it is as sad as it is terrifying. Returning to the actual culprit in the glassification case, Jonah’s wife killed those girls out of a misplaced desire for revenge. She thought her husband was sleeping with them. This foreshadows the misplaced blame that H. G. will exhibit in the season finale, when she decides to punish the entire world for her agony. The wife is an eerie example of what being consumed with a desire for revenge can do to a person, an indication of just how deeply twisted H. G. might be beneath the surface.

Speaking of H. G., let’s talk about the time machine for a moment, shall we? Firstly, I have to just mention how steampunk-awesome its design is, my favorite aspect of it being the flux capacitor. This show is geeky perfection. Another major development that we finally learn in this episode is that H. G. already has, indeed, invented a time machine, but that it only allows someone’s consciousness to be sent back. Interestingly, this actually fits with what was the previously accepted truth about time travel in Warehouse 13‘s sister show, Eureka‘s, mythology. In the first season of that show, Carter and Henry both time travel via this method. It is only later on in the fourth season that an otherwise impossible form of time travel occurred.