Hello, everybody and welcome to the Farnsworth Society, where we, as a group, re-watch television shows that are dreampunk, steampunk, cyberpunk, anypunk-related and meet weekly to discuss each episode one at a time. Our first show is the steampunkalicious Warehouse 13 (it only seems fitting to begin the Farnsworth Society with this show, doesn’t it?). Today, we’re covering the second season’s “Vendetta”. And please fill up the comments with your own thoughts, remembrances, favorite things about the episode, absolutely anything. And, yes, spoilers for any other aired episodes from Seasons 1-3 are allowed. We considered making it spoiler-free, but then decided it would likely constrain conversation far too much. Let’s get to it, kids!

“Vendetta” is a taut, brilliant hour of television that seamlessly unites Warehouse 13‘s wackier, self-referential side with the eerier feel of the early episodes of the first season, which works particularly well, as the episode revolves around revelations and twists from the past.

First and foremost, of course, we have Artie, whose history as a “Russian spy” is finally revealed. When we first learned of this in the first season, it seemed difficult to reconcile the Artie we knew today with the potential villain of the past. It seemed that there had to be an explanation for how Artie could have betrayed his country in years past and yet then been completely forgiven by Mrs. Frederic. Why did she hand-pick a spy for the Russians for Warehouse duty? So much of it didn’t fully add up, and yet since Artie always keeps his secrets close to his chest, we did not know, besides the assumption that there had to be something more to the story than met the eye, and as it turns out, there was. What is so fascinating about the explanation we receive in this episode is how logically it fits and how well it works with the history of the show. Oftentimes these sorts of revelations either prove to be disappointing or end up turning a hero too morally ambiguous. This was a concern I had before seeing it the first time–would Artie’s past be forgivable? 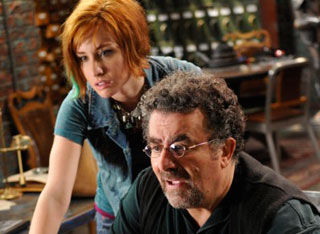 As it turns out, the truth makes Artie even more noble, while simultaneously explaining why he was in trouble with the government, and why Mrs. Frederic would want him for her team. Artie Weisfeldt, during the Cold War, had been bargaining with the Russian government to free some of his relatives from captivity in the gulags. He did so by providing the Russians with antiques that proved to have–shall we say–certain powers, powers of which he was not aware at the time. Upon realizing what he was actually dealing with, he turned himself in to someone who turned out to be Mrs. Frederic, and the rest is history. This is absolutely ingenious backstory. In tying it to the historical persecution of Jews in the Soviet Union, the writers imbue Artie’s story with emotional resonance and depth. One can understand why, from Artie’s perspective, providing an enemy government with trinkets would seem a worthwhile cost for saving people he loved from tyranny. There is also added irony to the fact that one of these items was a chain from one of Torquemada’s racks. In other words, Artie freed oppressed Jews with an a item once used to oppress them–a beautiful and subtle nuance, from a writing standpoint. Furthermore, it makes complete sense that Mrs. Frederic would consider someone who had proven to be so adept at gathering these artifacts to be a perfect candidate for her particular program.

In the end, Artie’s identity was actually changed not to protect him from our government, as “Implosion” misdirected us into believing, but from the Russians. Unlike many other shows that continue to portray modern-day Russian spies, despite the fact that the Cold War is over, Warehouse 13 proves itself to be cleverer once again. Although the show leads us to believe that it must be Artie’s former Russian contact who abducts him, it is, in fact, the son of Artie’s Russian contact, who had been imprisoned for life by his own government after Artie dried up as a source. This is another intelligent writing decision, as it demonstrates how difficult Artie’s decision was. In doing the “right thing,” in trying to protect others from such dangerous weapons falling into Russian hands, Artie doomed this man to the same fate from which he had saved his own relatives, and so he is not fully absolved of his past actions. 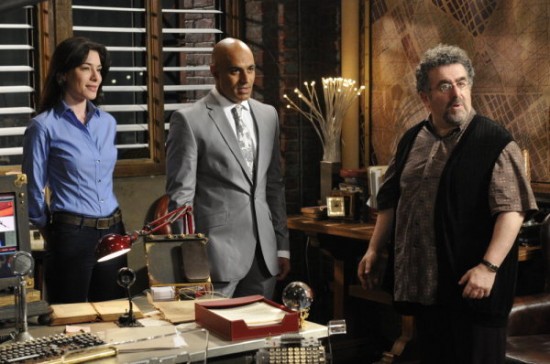 None of this is enough to convince him that H. G. Wells has been similarly misunderstood, however, and when the Regents reinstate her as a full Warehouse agent, in large part due to Myka’s testimony, he is sickened. The question is, however, where this disgust is coming from. Is this reaction an attempt to distance her “crimes” from his, a refusal to identify with someone whose actions, if she is to be believed, are no worse than his? How much does Artie know about what Wells’ crimes were? Her backstory, which she tells Myka this week, is a fantastic explanation that beautifully reconciles her past with her present. After her daughter was brutally murdered, she searched through the Warehouse, in places she didn’t belong, for items that could help her undo the past, ignoring the Regents’ admonishments over and over again. Finally, she herself asked to be bronzed as punishment. She claimed to not want to live in that same world in which her daughter had died and saw bronzing as a potential form of time travel to distance herself from a painful present.

Depending on what artifacts she was messing with, this could very well have qualified her as one of the most dangerous people in history. It isn’t a surprise that the author of The Time Machine is revealed in the next episode to have experimented with time travel. In trying to save her daughter, she very well could have potentially unraveled the entire universe (though we learn in the next episode that time travel can’t reverse the past, she didn’t know that before making her trip). Either way, though, does this make her a villain or simply someone willing to do anything to save someone she loves, which is again, reminiscent of what Artie did? Now, of course, they are different. Artie didn’t realize what he was doing, whereas H.G. was knowingly putting the world at risk, and will do so again in the finale. Again, though the “villain” label is a slippery one.