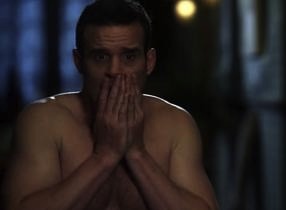 Returning to the subtext of the episode, though, it’s interesting that in many ways all of the romantic leaps that occur in the episode are illegitimate, in a manner of speaking. Artie’s love for Lauren is manufactured, Kurt falls for Myka but doesn’t realize that it’s Pete’s personality he fell for, and Kelly grows closer to Pete because of words Myka said, which he’ll probably never know. Perhaps it’s another subtle warning that Warehouse agents don’t tend to have successful relationships with average people.

A few more odds and ends:

Favorite Scenes: Pete meeting Leena in the food aisle and discovering the original red herrings and the original can of worms.
Notable Quotables: “Let’s bag old Kathy Griffin there, shall we?”–Pete to Myka, as they bag the Griffin bookend
Pete: What is that?
Myka: (rubbing two fingers together, while wearing her gloves) That is the world’s smallest purple violin.
Pete: You are going to make someone a very sarcastic wife some day.
Artie: Leena, this one is ready to be shelved.
Leena: A tin of sardines?
Artie: Yes, it was part of the Shackleton expedition. They were trapped in the ice, you know, for two years. They still had the good sense not to open that. Leena: Had the sardines gone bad?
Artie: Very bad.
“Knock knock! Just like old times!…Pwned!”–Claudia, after handcuffing Artie to the closet
“Like I don’t know how to improvise an electromagnet? I was doing this when MacGuyver was still trapped in his crib.”–Artie
Kurt: Okay, don’t take this the wrong way, but until tonight, I had no idea you were so much fun.
Pete (in Myka’s body): Dude, until tonight, I wasn’t that much fun.
“Knock! Knock!”–Artie, after leaving Claudia handcuffed to the stove
Continuity: As previously mentioned, Pete’s alcoholism becomes an issue in this episode, when he accidentally loses sobriety for the first time in years, against his will. After Claudia’s first official mission as an apprentice last episode, this week she goes on her first field assignment with Artie, during which they both reference the “Knock! Knock!” with which she returned to his life last year. Myka’s uncool social status in high school and her issues regarding that continue to build on the self-esteem issues she has regarding her for-lack-of-a-better-word feminine side that were explored in “Age Before Beauty”.

Next Monday: “Secret Santa” (This episode originally aired around Christmas, after Season 2 was done, but chronologically, this is where it fits.)

Previous Episode: Episode 19, “For the Team”

Warehouse 13 Season 4, Episode 9 airs tonight at 9 PM eastern time on Syfy! Check this site by Wednesday for our review of the episode!