Hello, everybody and welcome to the Farnsworth Society, where we, as a group, re-watch television shows that are dreampunk, steampunk, cyberpunk, anypunk-related and meet weekly to discuss each episode one at a time. Our first show is the steampunkalicious Warehouse 13 (it only seems fitting to begin the Farnsworth Society with this show, doesn’t it?). Today, we’re covering the second season’s “Merge with Caution”. And please fill up the comments with your own thoughts, remembrances, favorite things about the episode, absolutely anything. And, yes, spoilers for any other aired episodes from Seasons 1-3 are allowed. We considered making it spoiler-free, but then decided it would likely constrain conversation far too much. Let’s get to it, kids!

“Merge With Caution” is an absolutely delightful episode that centers on relationships, romantic and otherwise. In the first camp, we have Pete and his new girlfriend, Kelly, Myka and the guy she had a crush on in high school, Kurt (WWF wrestler Cody Rhodes), and Artie’s artifact-inspired obsession with Lauren (Dead Like Me‘s Laura Harris), the girl rocking Mata Hari’s stockings. As far as the second camp, we have what are arguably the show’s two core duos: Pete and Myka, and Claudia and Artie (Clartie? Artia?). What is so clever about the body-swap plot, as well as the “love whammy” plot, is how they manage to play with these character dynamics, as well as cause each character in each team to briefly walk in the other one’s shoes.

Now, practically every sci-fi or fantasy show has had its characters switch bodies at some point (Futurama mocked this trope rather ingeniously by having every single character trade places in what is likely the most complex use of the trope I’ve ever seen), so there were some aspects of Pete and Myka’s switcheroo that were predictable, despite being hilariously carried out, such as Pete playing with Myka’s breasts, but what made the episode truly special was the intelligent manner in which each character found him or herself having to deal with the results of the Griffin’s curse. Recovering alcoholic Pete, who had been sober for 8 years, finds himself suddenly having to cope with being drunk on the three vodka tonics that Myka had consumed moments before, and Myka finds herself in the middle of Pete’s romantic weekend with his girlfriend. 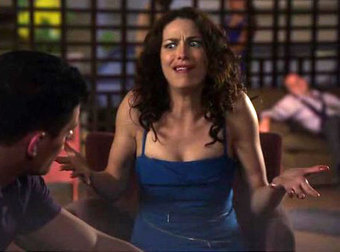 Actually, the homoeroticism was used to great effect for both characters. At first, Myka’s awkwardness at having to woo Kelly for Pete gives way to her telling Kelly exactly what she knows a woman would want to hear from a man, thus strengthening Pete and Kelly’s relationship. Meanwhile, Pete haplessly charms Kurt by simply being a dude in the body of a woman. The fact that this turns Kurt on immensely, to the point that he kisses Pete, is a nicely subversive move on the writers’ parts: having a stereotypically macho man as a guest star and then getting him to kiss a male character who he thinks is female precisely because he finds himself attracted to his/her “masculine” qualities. Wonderful! There’s also fantastic subtext to be found in the fact that since Pete isn’t actually the most uber-macho guy, Kelly doesn’t notice that there’s anything too wrong with Pete when he’s taken over by a female mind. Similarly, since Myka herself has many “masculine” qualities, she doesn’t seem too out-of-character to Kurt either, which is one of the most direct ways the show itself has acknowledged the way both of their leads blend gender stereotypes. And then the two literally occupy a single body. Great stuff.

Moving over to our other pairing, Artie is usually the one left having to clean up after Claudia’s messes, but this time it’s the other way around, when Artie is transformed into a lovestruck stalker and Claudia has to take care of the entire situation herself. It is as fun to watch these two working together in the field as it is to see Claudia trying to save Lauren and herself from Artie, and Artie from himself. Additionally, the reveal that Lauren hadn’t initially intended malice towards these men is a good twist on the femme fatale trope, which has misogynistic roots, conflating strong women with villains. Here, the woman simply wanted the insurance company to pay after her brother died due to their refusal to cover him, and all of the violent actions are taken by the men who then want to possess her (and even they aren’t truly to blame, as it was really the stockings influencing everyone). Afterwards, she doesn’t even wish the insurance company’s treatment of her brother on the insurance guy who was hit by the car.