Favorite Scenes: Pete killing his boredom by wearing Timothy Leary’s glasses, and seeing Artie as a walrus. H.G. saving Myka with the grappling gun, and all of their ensuing sizzling chemistry. Artie’s fatherly advice to Pete, and Pete’s response. Poor Claudia’s attempts to interview the wrestler. Myka’s conversation with Claudia, getting her focused for the mission. 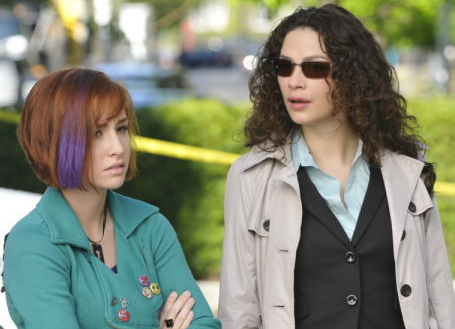 “Ruh-roh!”–Claudia, later in the episode

Helena (after saving Myka’s life with the grappling gun): And yet you’re still wondering if I set this whole thing up just to prove my innocence.
Myka: The thought did cross my mind somewhere between “Holy crap, I’m gonna die!” and “Aaaah! I’m flying!”

“Is it warm in here or am I wearing 38 Snuggies?”–Claudia

Kelly: Ok, Chinese place on Main, and we are going Dutch.
Pete: Couldn’t we go to the Dutch place on fifth and go Chinese?

“Maybe I’m wrong, but are Artie and Vanessa sitting in a tree?”–Pete

Continuity: This episode marks the first appearance of H. G. Wells since she was first de-bronzed in “Time Will Tell”. This is also the first time that Claudia is officially sent on a mission from the outset. The reason is that Pete is still under probation after being affected by the telegraph machine in “Around the Bend”. Speaking of which, during Artie and Pete’s conversation, Artie references events from throughout the season to explain Pete’s current state of mind. For the first time in a while, a reference is made to Myka’s ferret. It’s good to know that, even though he remains off camera, the little guy is still alive and well. Pete wears Timothy Leary’s glasses, a facsimile of which MacPherson used as a sort of visual catalogue in the first season premiere. We see Pete reading a comic in this episode. We learned what a huge comics fan he was in “Mild Mannered”. Once again, we also see Claudia with her guitar, and Artie working on his musical composition.

Next Monday: Episode 20, “Merge with Caution”

Previous Episode: Episode 18, “Around the Bend”

Warehouse 13 Season 4, Episode 8 airs tonight at 9 PM eastern time on Syfy! Check this site by Wednesday for our review of the episode!