Hello, everybody and welcome to the Farnsworth Society, where we, as a group, re-watch television shows that are dreampunk, steampunk, cyberpunk, anypunk-related and meet weekly to discuss each episode one at a time. Our first show is the steampunkalicious Warehouse 13 (it only seems fitting to begin the Farnsworth Society with this show, doesn’t it?). Today, we’re covering the second season’s “For the Team”. And please fill up the comments with your own thoughts, remembrances, favorite things about the episode, absolutely anything. And, yes, spoilers for any other aired episodes from Seasons 1-3 are allowed. We considered making it spoiler-free, but then decided it would likely constrain conversation far too much. Let’s get to it, kids!

At first glance, “For The Team”‘s plot might not sound extremely promising. A college wrestling team whose members are spontaneously combusting might not initially seem to have quite the oomph one might expect from the episode that brings the return of H. G. Wells. That is also exactly why it was such a smart move, from a writing perspective. For the majority of the episode, at least the first time around, as viewers, we’re wondering why Wells is here. On the one hand, perhaps she wants to use this artifact for its fiery potential, but even given that, there seems to be something a bit unworthy about the mission for such a one as Wells. After being gone for six episodes, where’s the epic sweep to herald the villain’s returns?

But this is precisely what gets Myka, and perhaps us, to question Wells’ motivation. Is it possible she really just wants to join the team? Could she actually have shown up just to help? This doesn’t seem to gel with whatever grand plan she was cooking up at the end of the season premiere, which many at the time guessed was a time machine (which we later learn isn’t the case), but on the other hand, she reveals that the item that she took from the Escher Vault was a locket with her now-long-deceased daughter’s picture within it (or at least that was one of the items). Further, her words about having nothing else to do and nowhere else to turn do make sense. She is out of time, after all. Now, granted, her case would probably be much stronger were she to actually reveal to Myka what she actually did to warrant being bronzed–assuming the possibility that her argument that she was only considered to be evil because she was a woman with smarts at a time when that was not appreciated, to say the least, is true. 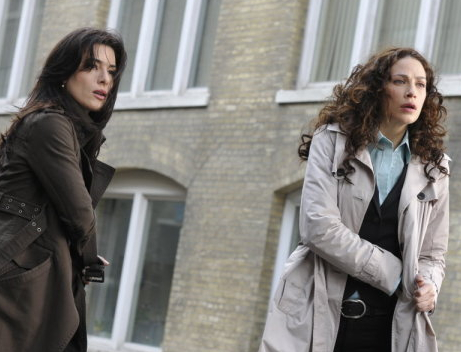 Even so, Wells does make an awfully compelling argument, and does a great job of either convincing Myka to empathize with her–both over loss and the question of whether Myka would have been suspected for mishandling the situation that led to her partner and lover’s death had she been a man–manipulating her, or both, depending on your perspective. Looking back on the season after knowing Wells’ ultimate endgame makes this episode even more significant because some of the first words Wells speaks are about the current injustices of the world, which we now know is what drove her to be bronzed in the first place and to then rebel against these injustices in the second season finale. What we don’t know in this episode but learn later is that Christina didn’t simply die in the subsequent years after Wells was bronzed but was murdered by petty thieves, but in retrospect, it is important to note that the first time Helena speaks to Myka about the world’s cruelty, it is immediately before showing her the locket. Christina is the key. Wells truly is a fascinating character, because even this time around, knowing what her ultimate endgame in trying to rejoin the Warehouse as an agent is, one can see the conflict in her. She may say that the world is unsalvageable but at the same time, she is drawn to Myka, and she will come to recapture the feeling of home and family the Warehouse and its agents once engendered in her. It is precisely these feelings–her humanity–that will “undo” her. And Murray just nails these complexities, while being dazzlingly charismatic to boot.

Speaking of which, it would be difficult to deny the homoerotic vibe stirring between Myka and H.G. It doesn’t hurt that Joanne Kelly and Jaime Murray’s chemistry is off the charts. Despite herself, Myka finds herself entranced by Wells–not necessarily in a romantic way (though, then again, maybe), but this powerful, brilliant woman who survived despite the odds and in the face of a stifling patriarchy, is getting to her, as is the technology she developed so long ago, such as the grappling hook, that should be primitive by our standards but is actually still pretty damn cool. Once I began to focus on this pull Myka is starting to feel towards someone who might very well be the enemy, the metaphor of the episode coalesced for me. The A-plot of the week revolves around a team whose members are sacrificing their lives (perhaps not willingly, but even so) for the sake of that team, members who might be wiser to distance themselves from the team. The fate of the wrestling team is a symbolic warning to the members of Warehouse 13 to avoid the fate that befell so many other agents, whose lives were taken by the warehouse, either literally in the case of those agents who went mad or died on missions, or figuratively in the case of someone like Artie, who sacrificed his chance for a “normal” life long ago. 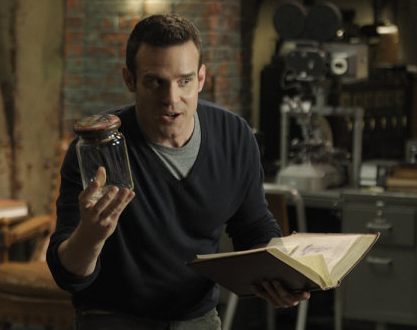 Pete and a Mason jar

Now, what the team members aren’t realizing at the moment is that as enticing as a life apart from their close-knit core group might seem, there are dangers to separating themselves from one another, as well. In the case of Myka, the real danger might be in beginning to trust Wells. Then again, maybe not. The danger for the male members of the team is in getting their hearts broken. By the end of the episode, Artie and Pete have inspired one another to take a chance and pursue romantic relationships, Artie with his doctor, played by the original Bionic Woman, Lindsay Wagner (awesome casting as usual), and Pete with the local vet, Kelly Hernandez, who was so irritated by him in “Beyond Our Control.” (By the way, so great to at least hear about Myka’s ferret again!) Speaking of which, episode writer Drew Z. Greenberg demonstrates his superb knack for mining emotional depth from character interactions that have been a strong point throughout his career, particularly in the scene between Artie and Pete, when Pete tells Artie he would be honored to be like him, and Artie tells him that he would be honored for him to be more–a beautiful thought, beautifully expressed. Other examples are, of course, the scenes between Myka and H.G., and between Myka and Claudia.

Speaking of which, Pete isn’t the only one in this episode who wants to emulate a figure he looks up to. We also have Claudia. At first, it seems that her discomfort at interviewing the wrestlers is simply because she feels out of place not only with people her age but with such blatant sexuality as half-naked guys in a locker room, and while this is certainly an aspect of it, she also reveals that she is desperately trying to be like Myka and feels that she’s failing in comparison. This is great continuity, as there have been numerous times throughout the series that we see Claudia looking up to Myka, asking her to teach her her moves and that sort of thing. Here, Myka encourages her to be herself though, while simultaneously pointing her in a direction that she herself took, and one that could help Claudia be a full member of the team one day, namely pursuing her education, which is, yes, another thing that, by the end of the episode, begins to draw one of our team members outwards.

The question is, are all of these teams members’ various attempts to focus on their own desires a good thing, or have they drawn the wrong conclusion from the combusting team members? Perhaps the danger isn’t in sticking with a potentially hazardous team but in having their confidence in it undermined.