And the way Mrs. Frederic ties it all up together at the end, explaining Pete’s paranoia as a subconscious reaction to the fact that the team did have a traitor in their midst, albeit an unwilling one, worked beautifully, as well. Pete, Myka, Artie, and Claudia are working for people who don’t give them all the answers they need (even though, amusingly, it is often Mrs. Frederic telling Artie he should open up more), and who even have the right to kill them if necessary. Additionally, they were recently attacked by a former agent, not to mention one of their own (against her will or not). Impressively, the show does not forget this history and doesn’t allow its character to do so, either.  This theme is reinforced by Claudia discovering the list of methods by which she might be disposed of, if necessary. And of course, at the time, this discovery also serves to increase the audience belief that Valda has turned on them, particularly coming on the heels of his visit to the Warehouse, in order to throw his weight around. Pete’s internalized fears also nicely set up next week’s episode, when H. G. Wells saunters back into their lives. 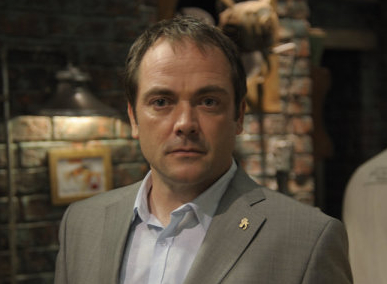 By the way, the look on Mrs. Frederic’s face when Pete gently taps her on the cheek could not have been more brilliant. Eddie McClintock is absolutely superb throughout the episode (while people often note his skill at comedy, he is always fantastic at highly charged emotional breakdowns as well, as in “Burnout,” and this episode is a brilliant showcase for him), but with one subtle glance, she steals the entire episode. This is why CCH Pounder is amazing.

Instances of Tapping Throughout the Episode: The tapping noise basically occurs each time Pete is about to suffer a hallucination, or when he is currently in the throes of one. These include…

Favorite Scenes: Pete playing with all of the artifacts at the British Museum. Claudia gleefully hacking and her later response to the kill list. Pete’s scene at the outdoor cafe and his later response to seeing the video of his making out by himself. Kate’s “death”. The climactic scene at the car lot. And, of course, Pete touching Mrs. Frederic’s face to check if she’s real.

Notable Quotables:  “The pants are eminently removable.”–Pete to Kate

“Artie, it’s Pete. It’s a win when he doesn’t lick anything.”–Myka, replying to Artie scolding her for allowing Pete to touch the artifacts

Pete:  Oh, god. Are you here to kill me?
Mrs. Frederic: If I was, you would already be dead, and I would be halfway to dinner.

Continuity: Hugo’s split personality (literally) in the previous episode can be seen as foreshadowing Pete’s artifact-induced mental break here. Just as with the gladiator’s weapon of choice in “Beyond Our Control,” the elephant walking stick that causes earthquakes once again foreshadows the Ice-Age-inducing trident that H. G. will wield in the season finale, particularly in how it operates. This episode features Valda’s third appearance, the first two times being in the first season’s “Breakdown” and “Mild Mannered,” earlier this season. It is, as far as I recall, the first time we learn his first name is Benedict. Pete’s issues with alcoholism play a major role in this episode. We first learned he was an alcoholic in the first episode, and he attended an AA meeting in “Magnetism”. He has been sober for years now, something that will unfortunately change in two weeks, in “Merge With Caution”. Claudia mentions to Artie that Todd dumped her, which occurred in last week’s episode. She continued to cope with her issues surrounding the breakup in the crossover Eureka episode, “Crossing Over,” which is also available as an extra feature on the Warehouse 13 Season 2 DVD set.

Warehouse 13 Season 4, Episode 7 airs tonight at 9 PM eastern time on Syfy! Check this site by Wednesday for our review of the episode!