Hello, everybody and welcome to the Farnsworth Society, where we, as a group, re-watch television shows that are dreampunk, steampunk, cyberpunk, anypunk-related and meet weekly to discuss each episode one at a time. Our first show is the steampunkalicious Warehouse 13 (it only seems fitting to begin the Farnsworth Society with this show, doesn’t it?). Today, we’re covering the second season’s “Around the Bend”. And please fill up the comments with your own thoughts, remembrances, favorite things about the episode, absolutely anything. And, yes, spoilers for any other aired episodes from Seasons 1-3 are allowed. We considered making it spoiler-free, but then decided it would likely constrain conversation far too much. Let’s get to it, kids!

Back when “Around the Bend” first aired, I recall being impressed by how the promo for the episode from the previous week actually added to the viewing experience. Knowing that Pete would be given some sort of mission that would put him in conflict with the rest of the team, and which he couldn’t discuss with them (but not the exact nature of what was going on) made it even easier to be misled by this episode’s quite sophisticated plotting. And when the episode revealed that “Mrs. Frederic” was the one ordering Pete to intentionally let an artifact go, and then that the Regents suspect one of his people of stealing artifacts, it added (false) legitimacy to the scenario.

The fact that there is a great deal we don’t know about Mrs. Frederic might, on a different show and under different circumstances, have led viewers to find her intentions suspect, but CCH Pounder infuses her character with a sense of calm authority and veiled maternalism towards the gang that makes it very difficult not to trust her. Therefore, when she first tells Pete that one of his friends is under suspicion and then appears to believe him when he tells her that Valda’s the culprit, we believe this all to be true, because Mrs. Frederic says it is so. 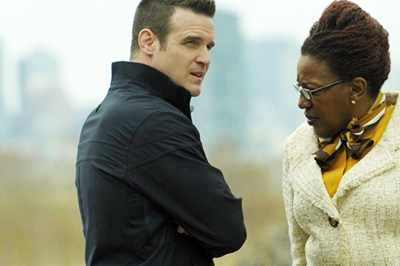 Incidentally, even the reason she tells Pete that he is not under suspicion is convincing. He is the most emotional of group and the one who would have the most trouble masking his emotions, which again says a great deal about the “feminine” qualities woven into his character (most notably his intuition)–most unusual for a male action star and most welcome, because as he is acted and written, these features never invalidate his masculinity.

The writers quite elegantly manipulate us throughout the episode, gradually dragging us along what seems to be a dark, complex road rife with conspiracy and politics amongst the Regents. Is Valda evil? Has he captured Mrs. Frederic and turned the team against Pete? Is it possible that this is all some elaborate test concocted by the Regents to test Pete, the rest of the team, or all of the above?

All of these thoughts ran through my head when I first saw the episode, and I was continually impressed by how skillfully the writers had trapped Pete, because of course, if Valda went evil, he would have the power to control the situation and to ensure that Pete’s people would have to capture him. And were Pete to try to tell them the truth, Valda could have them killed–a win-win situation for a corrupt Regent. Furthermore, the writers skillfully brought Pete’s past drinking problems into the picture. At first, it momentarily seems that Myka might have been doubting Pete’s loyalties, but we soon learn that that isn’t the case, that she has as much faith in him as he does in her. Her first instinct isn’t that he has betrayed them but that he has begun drinking again. 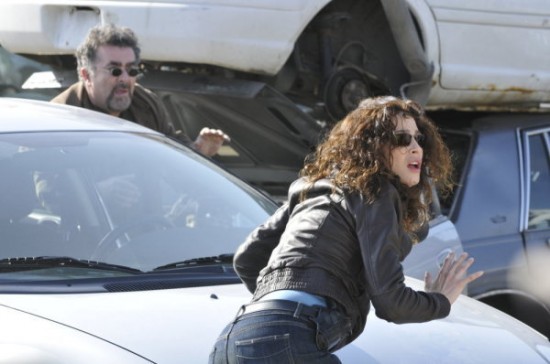 And we can certainly see why his behavior might come across as off-kilter, even as we tear our hair in frustration that first time around, knowing that Pete is right. Valda’s been playing them. This has to be the case. After all, we’ve been in Pete’s POV the entire time, and POV doesn’t lie. Except apparently it does. The scene in which Tia Carerre’s character, Katie Logan, a former fling of Pete’s, is shot right in front of him is easily one of the most shocking moment in the series’ history to date, made even more jarring a moment later when we find Myka speaking with her in her office–possibly the best plotting twist the show has featured to date, as well.

Soon afterwards, it all becomes clear. Pete has been having paranoid hallucinations the entire time, a la A Beautiful Mind. No, this isn’t the first time the trope has ever been used, but that doesn’t make it any less effective or unexpected here. Suddenly, everything starts to click. A-ha, that’s why that waitress was giving him such an odd face at the outdoor cafe. The first time I saw the episode, I thought she might have been either a rogue enemy Regent working for Valda, or a “good” Regent whom Valda had convinced that Pete was dangerous. And that’s why people, animals, etc. kept making that tapping noise. The telegraph machine! Even the editing of the episode itself reinforces the tapping, with the quick jump-cuts that punctuate nearly every “discovery” scene paralleling the tap-tap-tap. Furthermore, I love how the collection of throwaway moments of Pete casually goofing off in the museum at the start not only sets the entire plot in motion but helps obscure that exact revelation. That is some mighty crafty plotting.