Hello, everybody and welcome to the Farnsworth Society, where we, as a group, re-watch television shows that are dreampunk, steampunk, cyberpunk, anypunk-related and meet weekly to discuss each episode one at a time. Our first show is the steampunkalicious Warehouse 13 (it only seems fitting to begin the Farnsworth Society with this show, doesn’t it?). Today, we’re covering the second season episode, “Beyond Our Control”. And please fill up the comments with your own thoughts, remembrances, favorite things about the episode, absolutely anything. And, yes, spoilers for any other aired episodes from Seasons 1-3 are allowed. We considered making it spoiler-free, but then decided it would likely constrain conversation far too much. Let’s get to it, kids!

Last week’s Warehouse 13 tweaked classic comic books. This week’s target? B-movies. And once again, we’re seeing the writers take more and more advantage of the infinite potential of the series’ concept in an episode that involves, as Allison Scagliotti tweeted when it first aired, “cowboys, gladiators, squawking Farnsworths, and a Snuggie.”  And she didn’t even mention the World War II marines, the gangster, the mad scientist, or the killer, magnetic robot.

”Beyond Our Control” presents practically every geektastic, B-movie reference one could think of, satirizing everything from their cheeseball, overwrought dialogue to their silly effects, while also managing to add to the series’ Farnsworth mythology–steampunk 3D projector that brings film to life, for the win!–not to mention throwing in some excellent meta jokes and references for good measure, my favorite being the act break in which Pete indicates that if someone fast forwards through commercials, it could spell their doom. Naturally, the next thing I did when it first aired (along with countless others, I’m sure) was to fast forward through the commercials. Another woven-in, subtle meta joke is that Warehouse 13 itself can be seen as an homage to B-movies, though this is the first time it has acknowledged that nuance as directly. 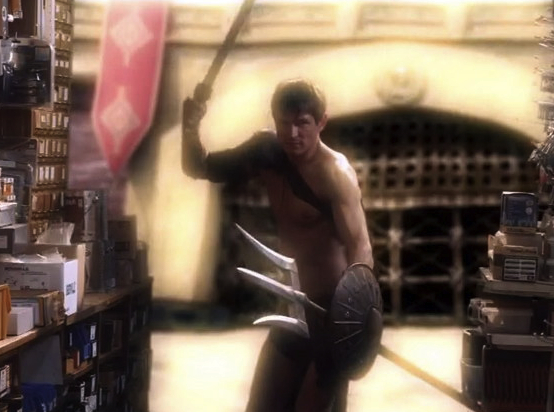 The episode also manages some nice plotting misdirects, first via Claudia whose tinkering with her Farnsworth, in an attempt to upgrade it, initially seems to be a potential cause for what is going on, when what is actually happening is that the Farnsworths are reacting to the projector, since they are on the same frequency. Another excellent misdirect is actually accomplished through the opening “Previously on Warehouse 13” sequence, which reminds us over and over about H.G. Wells. By the time people who seem to be coming from different historical time periods, start appearing throughout town, it seems very likely that a time machine might be involved.  In another way of looking at things, television and film are time machines of sorts, not only capturing moments in time forever but showing us fictional depiction of any other time period imaginable, so this week’s plot fits into the season’s central brewing themes on multiple levels. I also happen to love that all of the trouble this week is caused by a woman simply trying to curl up at home in her slanket, microwave some popcorn, and watch some movies on her TV, which is basically what we’re doing at that moment, give or take a slanket.

Incidentally, the manner in which this episode builds on the setting and a character established in the previous episode is quite lovely, and the episode also sets up Pete and Claudia’s Season 2 recurring love interests, which proves to be a great way of expanding the characters’ worlds a bit and making them less insular. We also finally learn the reason that the townspeople don’t take to Myka and Pete. One might assume that it was because they were new people from the big, outside world, and that they hadn’t made much of an effort with their neighbors. It is actually because Warehouse 13′s cover is a warehouse for the IRS. This reveal is clever, timely, and makes sense in the context of the story, while avoiding the small-town close-minded stereotype. 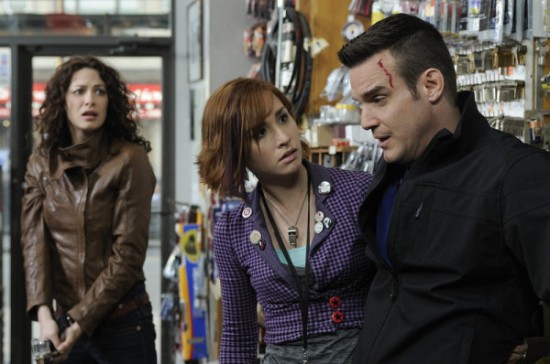 While Pete, Myka, Claudia, and Artie are busy trying to save the town from TV gone awry, Mrs. Frederic and the Regents are trying to save Leena from a remnant of MacPherson that had continued to reside in her head. This is another sophisticated storytelling misdirect–a misdirect within a misdirect, actually–this one carried over from the previous episode. Before, it seemed that MacPherson’s “ghost” appearing to Artie was related to Leena’s dizzy spells, but by the end of “Mild Mannered,” the show seemed to confirm that they weren’t related at all. Now, in this episode, yes, they remain not directly connected, however, we do find out that there is yet another “ghost” of MacPherson haunting Leena, one which seems to remain at the close of the episode–or at least an echo of it– even after Mrs. Frederic believes herself to have cured her. Leena’s sketch of the curved top of the trident will of course have impact in the season finale. Also interesting is how this vestige of MacPherson repeats the fearful words MacPherson spoke about there being nothing but a dark void after death, something which Artie experienced the opposite of during his short-lived death.  It seems that MacPherson, to a large extent, truly was driven by fear.

On a thematic level, Raymond St. James, the fictional actor who appears in all of the B-movies throughout the episode (played by Philip Winchester, and how often does one get an opportunity to play so many fun, campy roles in such a brief amount of time?), is also linked to MacPherson. St. James continues to live on through film and the hearts of his fans just as much as MacPherson continues to haunt the lives of the people he affected–both literally and figuratively. The parallel grows even stronger when one takes the arc of St. James’ films, aired in chronological order, into account. In his early films, he is a hero–a US Marine, a cowboy, and then a gladiator. Then, as his career progresses, he starts being cast in villain roles, which grow in intensity from that of a petty criminal to a lunatic hellbent on power and world domination. A good guy who eventually transforms into a practically sociopathic killer with delusions of grandeur…Sound familiar?