Hello, everybody and welcome to the Farnsworth Society, where we, as a group, re-watch television shows that are dreampunk, steampunk, cyberpunk, anypunk-related and meet weekly to discuss each episode one at a time. Our first show is the steampunkalicious Warehouse 13 (it only seems fitting to begin the Farnsworth Society with this show, doesn’t it?). Today, we’re covering the second season episode, “Mild Mannered”. And please fill up the comments with your own thoughts, remembrances, favorite things about the episode, absolutely anything. And, yes, spoilers for any other aired episodes from Seasons 1-3 are allowed. We considered making it spoiler-free, but then decided it would likely constrain conversation far too much. Let’s get to it, kids!

On top of being delightful and surprising, “Mild Mannered”‘s concept is so intelligent because it feels inevitable in retrospect. Of course, a comic-book-related object would finally surface that would bestow upon its possessor powers resembling that of a superhero. Of course. It makes sense not only on the surface level–it’s not a huge leap to see how someone wielding a seemingly magical object could use it to follow in his or her favorite fictional vigilante’s footsteps–but it dovetails beautifully with the mythology of the series. Artifacts are objects that become imbued with something of the energy of their original owner, creator, inventor, what have you. Superheroes are such an essential aspect of the American pop culture consciousness. So many children, grown people, fanboys, etc., put so much of themselves into worshipping their favorite masked avengers that it only makes sense, in the universe of this series, that an object owned by a famous comics creator such as Jack Kirby would begin to manifest some of the powers of which he wrote. One could imagine countless objects in the comic book store behaving similarly. (Of course, as it turns out Kirby’s belt isn’t the artifact, but the point stands, and the magic trunks clearly came from another comics source.) 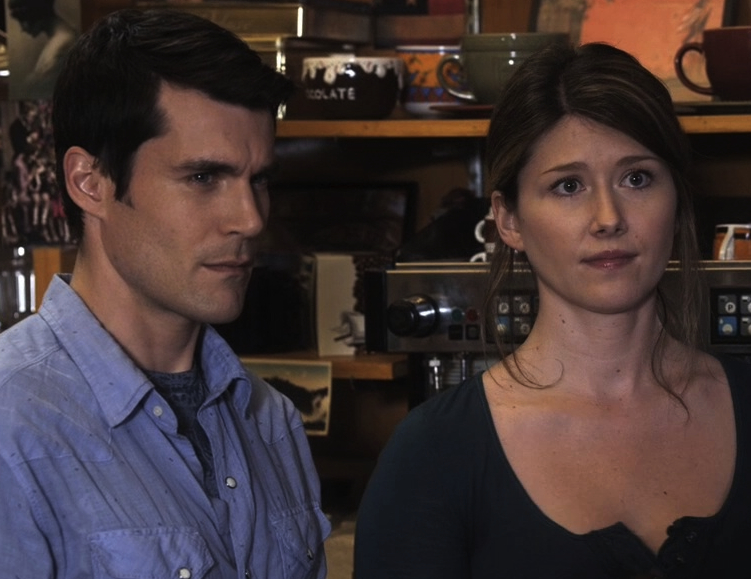 Naturally, in addition to comics, Warehouse 13 is also paying tribute to other aspects of the fan experience. On a scripting level, the episode works in numerous references and in-jokes, many self-referential verging-on-meta, such as the woman at the post office, who makes the sarcastic “Joy. Is it Tuesday again already?” crack upon seeing Pete and Myka (funny because it’s the day the show airs), the comic book store guy saying “frakking,” and Pete’s joke about the bully he’s talked about in the past. On a casting level, the show’s team makes the brilliant decision to cast in their literal comic book episode Jewel Staite and Sean Maher, both from the canceled-before-its-time sci-fi cult classic, Firefly, which itself now lives on in comic book form.  Seeing Kaylee and Simon reunited again in a romantic storyline is exciting enough, but having Simon also turn out to be a superhero is pure geeky heaven.

The revelation that Pete is in love with comic books and Myka never understood them is also so extremely in character. Then having Myka put on the suit and temporarily transform into a real-live superhero herself is another great geeky moment (not to mention Myka unknowingly quoting Peter Parker’s Uncle Ben), made even more clever with the cheeky twist that Pete has to then rip off another guy’s underwe- I mean, trunks, while Myka holds him down. This is goofily, good-naturedly homoerotic humor that would make Batman and Robin proud.

More than anything else, however, what this episode is about, on a thematic level is forgiveness, allowing the dark shadows of the past to dissipate, moving on, and making a new home for oneself. This is reflected first and foremost in the Sheldon/Loretta plotline (By the way, who really thinks that the similarity between the names “Simon” and “Sheldon” is accidental?) but echoes throughout the episode. Sheldon is attacked in his home, his possessions stolen. Instead of letting go of his anger and grief, however, he retreats into a fantasy of his youth, becoming his own childhood hero, the Iron Shadow. He has good intentions, wanting to protect the girl he loves and his town from crime, but what he ultimately needs to do is move past his pain, because it is doing more harm than good, both to himself and the people he loves. In response, Pete and Myka forgive him and don’t press charges.