Hello, everybody and welcome to the Farnsworth Society, where we, as a group, re-watch television shows that are dreampunk, steampunk, cyberpunk, anypunk-related and meet weekly to discuss each episode one at a time. Our first show is the steampunkalicious Warehouse 13 (it only seems fitting to begin the Farnsworth Society with this show, doesn’t it?). Today, we’re covering the second season premiere, “Time Will Tell”. And please fill up the comments with your own thoughts, remembrances, favorite things about the episode, absolutely anything. And, yes, spoilers for any other aired episodes from Seasons 1-3 are allowed. We considered making it spoiler-free, but then decided it would likely constrain conversation far too much. Let’s get to it, kids!

Season 2, folks! Can you believe it? Warehouse 13 finished off its first season with a number of killer cliffhangers, at least one of which might have led any reasonable viewer to wonder how in the name of Mrs. Frederic the show would ever be able to pick up from where it left off without doing the old “he hadn’t really died yet” trick that angered the psychotic Annie Wilkes so much in Stephen King’s Misery. As it so happens, however, the answer was staring us right in the face and in plain view in the season finale. It was the Phoenix, naturally, the very artifact that saved MacPherson’s life in a fire fifteen years previously and which we learned about in the very episode in which Artie seemed to die in an explosion. A simple writing misdirect, yet extremely effective, and all the moreso because the use of the Phoenix demands a sacrifice, which in this case turns out to be poor Mrs. Frederic’s driver, he of imposing height and little speech. MacPherson, therefore, forces Artie into walking his footsteps, ending an innocent life so that he might live.

Misdirects and twists are what this episode is all about. Packed with more plot than nearly the entire first season of Warehouse 13, “Time Will Tell” is a gleeful, old-fashioned, cliffhanger-ridden adventure that keeps us on our toes from start to finish, constantly questioning everything we thought we knew. Has Leena been evil this entire time? Is Mrs. Frederic dead? Was H. G. Wells actually a woman? 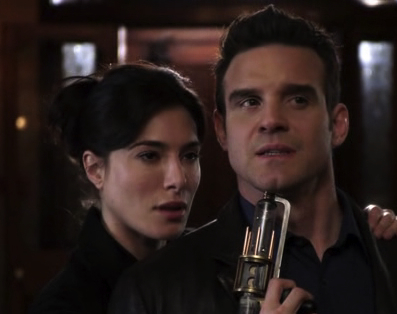 The best part about this last twist is that not only is it a perfect example of Warehouse 13‘s knack for making us question history as we (thought we) knew it, like the homicidal Alice Liddell of last season, but it instantly added a whole new slew of questions to be considered.  Is the charismatic, devious Helena (Dexter‘s Jaime Murray) evil?  Is it possible that her incarceration truly was due to a different society–Victorian, at that–frowning on a forward-thinking, brilliant woman and feeling the need to shield the world from such an influence? As we now know, that answer is actually somewhere in the middle, but what’s fantastic about the writing is that, even in retrospect, we can see both sides to Helena–one of the series’ most beloved recurring characters–from the very start. From the start, there are also hints of Myka and H. G.’s slashy chemistry, and on later viewings one might notice the fun Easter egg that H. G. appears in the background the instant that Pete wonders where H. G. Wells might be, before learning she’s a woman.

The episode thrillingly builds upon all that came before it, so we have fantastic continuity references to earlier events, from the more dramatic, e.g. the return of Claudia’s brother, Joshua, to the reiteration of running gags, such as Claudia smelling fudge in the face of a supernatural or artifact-based event, as well as further delving into mythology previously hinted at, such as the dazzling Escher Vault, which leads to one of the most exciting sequences in the series’ history up to this point, and the tantalizing information about Wells’ past as a warehouse agent herself–Warehouse 12, that is–hobnobbing with likes of Nikola Tesla himself.  Further, though, not only does the episode build on Season 1, but it improves on it.  The jokes are snappier (from the Young Frankenstein reference to Pete’s “C is for Cookie” ringtone), the pacing is swifter, the action is actionier, the gadgets are gadgetier.  Season 1 hinted at steampunk here and there, with objects such as the Tesla and the Farnsworth and the overall design of much of the tech.  This season immediately launches into more full-fledged steampunk, in the form of its Victorian villainess, her inventions, and even references to how her society might have driven her to become what she became. It even incorporates cavorite, the anti-gravity mineral that the actual Wells wrote of in his science-fiction novels!