Hello, everybody and welcome to the Farnsworth Society, where we, as a group, re-watch television shows that are dreampunk, steampunk, cyberpunk, anypunk-related and meet weekly to discuss each episode one at a time. Our first show will be the steampunkalicious Warehouse 13 (it only seems fitting to begin the Farnsworth Society with this show, doesn’t it?), starting with the pilot today. And please fill up the comments with your own thoughts, remembrances, favorite things about the episode, absolutely anything. And, yes, spoilers for any other aired episodes from Seasons 1-3 are allowed. We considered making it spoiler-free, but then decided it would likely constrain conversation far too much. And so, without further ado, let’s start at the very beginning, a very good place to start…

There will always be a very special place in my heart for the first episode of Warehouse 13. Has the show completely found its voice yet at this point, and has it yet become the bouncy burst of geeky joy that it eventually evolves into? No, of course not, but each time I see it, I flash back to that first time I watched the episode on its premiere night in 2009 and was instantly taken in by the world of the show. Because, yeah, it had some things in common with The X-Files and that sort of male-and-female-partner-solving-weird-crimes show, and, yeah, we have the by-the-books, more uptight female partner paired with the more willing-to-believe-in-the-Unexplained male partner, and yet, the moment Saul Rubinek appeared on screen with his weird steampunky gun thing and knocked out the security guard with the blue electricity surge, it instantly distinguished itself. When he later revealed to them that it was called a Tesla, named after steampunk favorite Nikola Tesla, who created it as an alternative to bullets, I was sold. And then, of course, there were the goggles. 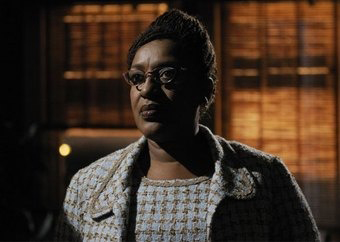 Okay, I was actually sold before that. It was probably the moment the divine C. C. H. Pounder appeared late at night in Pete’s apartment as the enigmatic Mrs. Frederic, offering him an invitation to “endless wonder” in a tone of voice that could have been construed as either a promise or a threat. It also could have been Pete and Myka’s first arrival to the warehouse, taking in all of the retrofuturistic technology in Artie’s office, the anachronistic mashup of the past and the future. I instantly fell in love with the computer with the archaic typewriter-esque keyboard, the armor standing in the corner, the old camera, the red digital display thingies. The level of detail in the art design is incredible. And there is that first glimpse of the interior of the Warehouse’s main room, seeming to stretch into infinity and packed with the most amazing objects imaginable. I was captivated by the very concept and mythology of the Warehouse, an archive that has important historical objects, some of which have managed to psychically soak up something of the events and/or people with which they were connected, and some of which influenced those events and people in the first place–Houdini’s wallet, which manages to escape from the Warehouse by jumping into Myka’s pocket, the actual Pandora’s Box,  and Lucretia Borgia’s comb, the first artifact that Pete and Myka track down as a team.

Rewatching the episode now, I find myself extremely impressed by how much of the series, as it is now, existed there at the start. Pete and Myka have certainly grown since that point, but the roots of who they are as people are all here–Pete, with his goofy facade and voracious appetite often hiding and deflecting from his inner vulnerability; Myka, whose precision, rigidity, and impatience accomplishing a similar goal. In the very first episode, we learn that Pete’s an alcoholic. We also learn that he has a psychic ability–he gets both good and bad “vibes” before events occur–and one which he always pays attention to, ever since he was a child and he ignored a bad vibe about his fireman dad, hours before he died in a fire. We also learn about Myka’s past–that her dad has always had trouble expressing affection for her; that she grew up in a bookstore; that she recently lost her previous partner (and lover) in an operation in Denver and that she still blames herself, even while also reminding herself that she did nothing wrong, which all explains so much about why she’s so hesitant to embrace a new partner, particularly one who isn’t as precise as she (Sam died because he came in early), and why she has trouble accepting Artie’s authority right away. The pilot does a really fantastic job of both establishing these characters but then also allowing them to gradually and organically warm up to one another over the course of the 90 minute runtime. And this happens because they each come to learn firsthand of the value that each one’s different perspective and talents bring to the team.

From the start, this is really more of a brother-sister relationship than the will-they-won’t-they? of practically every other similar male-female team. From very early on, they start to tease each other but not in the flirty way we’ve come to expect from this type of show. It’s really interesting to see, over the course of the episode, how their joking turns from initially hostile to almost familial. Eddie McClintock and Joanne Kelley have such natural chemistry together that, even on a fourth or fifth viewing, their comedic delivery on the episodes’ best lines is still hilarious. Their first real heart-t0-heart is also beautiful and affecting, foreshadowing later times that Pete will act as Myka’s compass by speaking a simple truth, with unexpected clarity–in this case, that the way to figure out the artifact is to go back over their investigation to find what doesn’t fit. 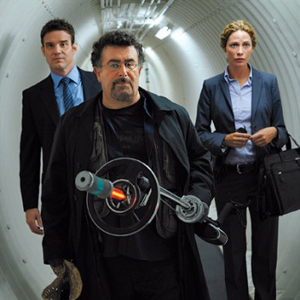 It’s also interesting to see that, a great deal of the series’ oddball sense of humor, is also there at the beginning. It doesn’t indulge quite so much in the full-on geekery of later episodes, and the overall tone of this first episode is a bit darker than the show would come to be on a regular basis (though, the darkness definitely resurfaces, as episodes like the third season finale will attest to), but there is a lot of whimsy to be had here, such as the long-distance football and the wishing pot that produces ferrets in lieu of impossible wishes, a concept that is practically Lewis Carrollian. Carroll’s influence also appears in some of the questions Artie gives Pete and Myka to ask, the most notable being whether the person smells fudge where there is no fudge, and whether he or she suffers the constant feeling that today is yesterday, as well as in Artie’s assertion that the artifact they’re seeking will be “bigger than a breadbox…or smaller.” Even Artie’s description of what happened to the two agents two years ago whose “clocks stopped” is dark but also darkly whimsical. A lot of what makes Warehouse 13 so great is there at the start. It just needs a bit of natural development to become what it eventually does.

Favorite Scenes: Mrs. Frederic’s pitch-perfect first appearance in Pete’s apartment is, naturally, a major highlight. Everything from her appearance to Pete’s befuddled reaction is absolutely wonderful. Pete and Myka’s first view of the Warehouse is also wonderful, as is their first meeting with Leena. I also always loved the surreal feel of the climactic scene–the outdoor campus theatre, the pit of fire, the ancient Italian words, the yellow energy emanating from the comb and infecting all of the audience members. Really great stuff.

Notable Quotables: My nomination for best line in the episode is Pete’s “I’m trained to take a bullet if necessary, but I’m not sure how to stop a dead Italian cougar.” Never gets old.

Continuity: While a lot of the continuity is quite accurate, right from the start, it seems that, in the first episode, the mythology of the Warehouses hasn’t been fully worked out yet. Artie says that the first Warehouse 13 burned down in 1898, but we later learn that the Warehouses have been in existence for thousands of years, and that this is simply the 13th iteration. It seems as if, in the pilot, “13” is just the numerical designation given to this warehouse, not confirmation that it’s the 13th of its kind. Furthermore, the Warehouse was still in the UK in 1898. We also later learn, despite what Artie says about them still working for the US government, that the Warehouse and its agents are actually above the U.S. government, and that the Regents always decide where it should be located based on what is the “center of civilization” at the time. One could argue, however, that Artie tells Pete and Myka that the Warehouse is government property so as not to scare them off, and because it is partially true, just not the full story.