Hello, everybody and welcome to the Farnsworth Society, where we, as a group, re-watch television shows that are dreampunk, steampunk, cyberpunk, anypunk-related and meet weekly to discuss each episode one at a time. Our first show is the steampunkalicious Warehouse 13 (it only seems fitting to begin the Farnsworth Society with this show, doesn’t it?). Today, we’re covering the first season finale, “MacPherson”. And please fill up the comments with your own thoughts, remembrances, favorite things about the episode, absolutely anything. And, yes, spoilers for any other aired episodes from Seasons 1-3 are allowed. We considered making it spoiler-free, but then decided it would likely constrain conversation far too much. Let’s get to it, kids!

Well, we’ve finally made it–Warehouse 13‘s very first season finale, and what a corker it is! The first time I saw it, I remember being truly blown away, and it’s to its credit that even this time around, the third or fourth time I’ve seen it now, and even knowing how the situation and various cliffhangers resolve itself, it still packs a punch and it’s still just as exciting to watch. It’s the sort of finale that feels like it’s really bringing the entire preceding season together into one epic whole.

MacPherson may have seemed intimidating before, but it’s nothing compared to what he unleashes upon the Warehouse and its agents in this episode. Mrs. Frederic explains that one of the reasons he was always such a great agent and is now such a formidable enemy was his ability to get inside peoples’ heads and to always be a few steps ahead of them, and this episode certainly proves that, as we get to see firsthand his ability to play the long game, not only in how he sets up his own capture, manipulating himself into the Warehouse in order to launch his attack from within but via the revelation of how he inserted himself into the Donovans’ lives years before. Posing as a professor, he is the one who first gave Rhetticus’ compass to Joshua, as well as the one who initially helped Claudia hack her way past the Warehouse’s firewall. The former reveals that MacPherson has been attempting to keep artifacts out of the hands of the Warehouse for a long time, while the latter shows how complex his game plan for breaking into the Warehouse has truly been, involving placing Claudia there as a patsy, drawing suspicion to her while simultaneously using Leena to actually smuggle out the artifacts–a truly brilliant diversion and a killer episode-ending twist. 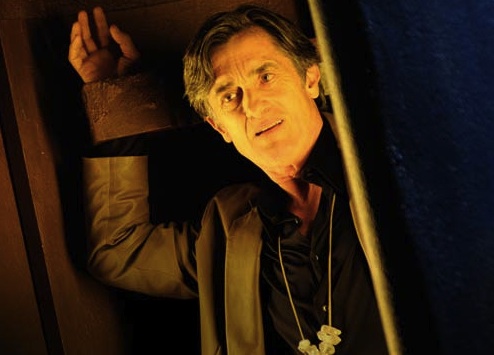 Speaking of which, each thimble-related twist is stellar. I vividly recall momentarily wondering whether Artie might actually have been working against them, or at least had been replaced by a doppelganger a while before, and then wondering if Claudia might actually have been brainwashed or hypnotized by MacPherson from the start, and then being shocked by Leena’s betrayal. And it felt potentially convincing, because Leena is the regular character we know the least about. She’s mysterious, and it seemed for a while here that that might have been because she was a traitor.

The episode also finally reveals at the start just how MacPherson went “bad” in the first place, and while, as we might have expected, it is related to his and Artie’s competition for the heart of the same woman, Carol, what finally pushed him over the edge was actually the Warehouse philosophy. Carol was actually caught in a fire in her apartment building, and although the Warehouse had a device–a medallion known as the Phoenix–capable of allowing someone to either survive a fire or immediately come back to life after they otherwise would have died in a fire, Artie demands that MacPherson not use it, the reason being that the price of using it is that other people will die in the place of those who the Phoenix saved. MacPherson ignored Artie’s pleas and played god, causing numerous deaths that night, because he considered Carol’s life and his happiness as being more important than the innocent bystanders who he didn’t know. His questioning of the Warehouse’s philosophy of locking up these amazing items instead of allowing the general public to be aware of and perhaps benefit from them, isn’t in and of itself wrong. In fact, he makes a compelling argument to Pete. But ironically, he also proves the reason that the Regents likely are right to lock these items up–because they are extremely dangerous and, even more significantly, can be used by people such as MacPherson, against the rest of the human race.

Returning to the Phoenix, the episode is also beautifully crafted in that it both begins and ends with a fire–in the first case, MacPherson runs into a fire against Artie’s arguments, and in the second, MacPherson basically pushes Artie into a fire. Once one watches the second season premiere, the circularity becomes even clearer, given the revelation of how Artie survives the conflagration. It is a mark of the writers’ excellent use of misdirection, however, that they do not cheat at all. The key to Artie’s survival was right there, staring us in the face from the start of the finale, and yet we only notice it in retrospect. On a re-watch, it’s easy to see that MacPherson must have planted the Phoenix on Artie when he passed him by, as Artie was lying on the floor of the office. It also seems significant on a thematic level that Pete’s dad died in a fire, as well, because Artie has become like a father figure to him, and he gets the same bad vibes throughout the episode as he did when he was a child the day his dad died. Pete is also significantly someone who might have felt enticed to use the Phoenix device, if he could have, back all of those years ago, and yet we know that, if he could do it over, he wouldn’t. He would never sacrifice others’ lives nor would his father want him to. 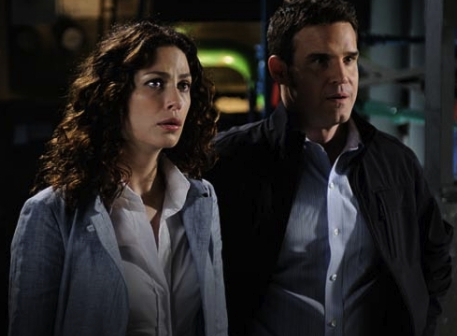 Also, suitably for the first season finale, the episode is an artifact smorgasbord, with countless objects, from the Harriet Tubman Thimble (whose power is one of the cleverest in the entire series’ run so far), the Goblet of Sevren, the Timothy Leary glasses (or the copy, at least), the tuning fork, the eggshell bomb, and so on and so forth. The series gets progressively better over the course of the first season, but this was in many ways for me the first episode that feels almost like Warehouse 13 as we now it today–imaginative, clever, twisty, suspenseful, humorous, a bit comic-booky in the best possible way–and it is the very next episode, “Time Will Tell” when the show finally becomes fully itself. Can’t wait for next week!

Favorite Scenes: Any time that Timothy Leary’s glasses are used, particularly the Van Goghish effect when Pete’s looking around outside. Pete nailing MacPherson by shattering the remains of the goblet. The Leena reveal. MacPherson and Artie in the Bronzing Chamber. The ultimate cliffhanger.

Notable Quotables: “What?! Why are you shaking your jowls at me?”–Claudia, asking Artie why he’s furiously shaking his head when she references the times disaster nearly struck at the Warehouse in front of Mrs. Frederic

Artie: She seemed shaken.
Pete: Mrs. Frederic? Seemed shaken?
Myka: That is so not comforting.

Continuity: Almost too much to list here. There is the reveal that ties practically all of the major events of Claudia and Joshua’s lives to MacPherson, the copious references to various events that occurred throughout the season, the return of Carol and MacPherson, and so on and so forth. This episode also marks the first appearance of the Bronzer and the concept of bronzing, which has a significant impact on future events.

Next Monday: Episode 13, “Time Will Tell”

Warehouse 13 Season 4 begins airing tonight, Monday the 23rd, at 9 PM eastern time on Syfy! Check this site by Wednesday for our review of the episode!