Hello, everybody and welcome to the Farnsworth Society, where we, as a group, re-watch television shows that are dreampunk, steampunk, cyberpunk, anypunk-related and meet weekly to discuss each episode one at a time. Our first show is the steampunkalicious Warehouse 13 (it only seems fitting to begin the Farnsworth Society with this show, doesn’t it?). Today, we’re covering the first season’s penultimate episode, “Nevermore”. And please fill up the comments with your own thoughts, remembrances, favorite things about the episode, absolutely anything. And, yes, spoilers for any other aired episodes from Seasons 1-3 are allowed. We considered making it spoiler-free, but then decided it would likely constrain conversation far too much. Let’s get to it, kids!

We’re in a very good stretch of Warehouse 13 by this point, as the show was really starting to find its groove creatively, even if it’s not yet quite the Warehouse 13 we know and love. “Nevermore” is one of those episodes that takes the potential and promise of objects that are informed by the historical people whose lives they were part of (or, in some cases, vice versa), and just runs with it. What other classic author’s pen would be more suited into becoming an artifact that can turn what people write down into reality–albeit a twisted, dream sort of reality–and which can infect the minds of people who use it than Edgar Allan Poe? And while at times, again, the CGI can be slightly wonky, it’s the thought and creativity behind it that counts. The Cask of Amontillado-esque sequence where the teacher is walled up inside his classroom; the Pit and the Pendulum pendulum; the William Blake-inspired “Tyger Tyger burning bright” moment–all wonderful, as is the creepy text-crawling-up-Myka’s-dad’s arm (and even if it looks fairly reminiscent of the creepy text-crawling-up-Willow’s-arm in the sixth season finale of Buffy, at least it cribs from the best). 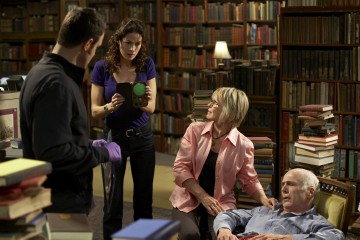 And speaking of Myka’s dad, played by the fantastic Michael Hogan (perhaps best known as Saul Tigh on then-SciFi’s re-imagined Battlestar Galactica), I recall many people being a bit confused by the depiction of his character when this episode first aired. After hearing about how stern and unforgiving he was to Myka when she was growing up numerous times throughout the season, a lot of people thought he didn’t seem that bad here, perhaps a little cranky but nothing compared to how Myka described him. From my perspective, however, that only makes his character more true-to-life. To begin with, Myka is a grown woman now, not the scared kid she once was, and so it makes sense that he would no longer treat her as harshly as he apparently once did, and that he wouldn’t seem as scary to her as he once did. Though most TV shows and films would handle this situation by depicting Mr. Bering as an utter monster, this is a much more interesting and probably more-true-to-most-peoples’-experience depiction–the flawed father here isn’t a cruel antagonist but just a man who never quite knew how to relate to his daughter and responded to this discomfort by building a wall around himself and who regretted that both then and now but still never quite learned how to solve the problem. It’s also important to realize, I think, that many people mellow as they grow older, and that’s what Mr. Bering seems to me now–an old man who has mellowed from the more judgmental, stern disciplinarian he once was.

And here, for the first time, of course, he appears small, helpless, and old to her, and Myka is the one who has to save him, along with her good friends, Pete and Claudia (joining the team on her first official in-the-field mission!). For the first time, he is dependent on her, and the fact that the effects of the artifact can be remedied in part by Myka’s surrounding him with books he loves and reading to him is just lovely. It’s wonderful to see a series written by people who care so much about writing and storytelling. A love of the written word is actually one of the few things Myka and he actually have in common (and I wouldn’t be surprised if she got her strict work ethic from him, as well), and here they can share in that. This becomes even more significant when she reads his own novel to him–a novel that he longed to get published years before but whose rejections from numerous publishers was probably a major contributing factor in the bitterness that informed a great deal of his life after Myka was born. Now, they connect for the first time over this same book, which significantly (and poetically, from a writing standpoint) opens on what seems to be a biographical statement on her father’s part: his protagonist is also a father who both loves his young daughter and is terrified of her–who, in other words, isn’t comfortable with the role of being a father and protector to his child. Significantly, the bifurcated artifact of Poe’s pen and journal need to be reunited in order to “break the spell,” and in the process, Myka and her father are reunited, as well. And both reunions contribute to the restoration of his health and their relationship. 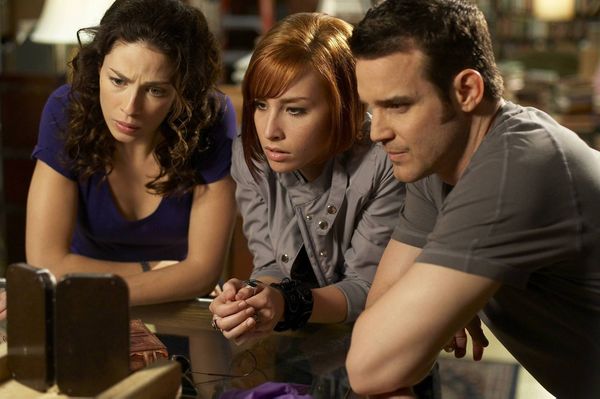 By this point, do I even need to mention how wonderful the performances are–how touchingly Joanne Kelly depicts Myka’s conflicting emotions, as well as Eddie McClintock sensitively portraying Pete’s brotherly attempts to ease Myka’s pain, even while never losing his essential Peteness (especially how he gets her to laugh to momentarily cheer her up)?

And we certainly can’t forget MacPherson, the mastermind behind this whole scheme in the first place, whose nefarious actions here take us right into the climactic events of the season finale. This is the first time, though, we get a real sense of just how dangerous, not just going after Artie now but his agents’ families. In retrospect, you have to wonder if he goes after Myka’s instead of Pete’s is because he doesn’t want to engage with Pete’s mom directly, knowing now who she is…

Favorite Scenes: All of the Poe-related moments, of course. Claudia’s blink-and-you-miss it Lovecraft reference, when she wonders if there might be a rat in the wall. The tiny cymbals that created a very loud boom. MacPherson’s use of Jack the Ripper’s lantern, which has the ability to transfix anyone in its light, thus explaining how he was able to subdue the prostitutes he slaughtered.

Notable Quotables: Pete: I think I’m hot for your mom.

Myka: I’ll break it to Dad.

Continuity: This episode features our very first bifurcated object! It also contains the first mention of the “ashes of the 12 previous Warehouses,” confirming that the Warehouse is numbered 13 because it’s the 13th, rather than being a coded designation, as implied in the pilot. Now, we do know now that not all previous Warehouses actually burned. At least one was lost, but I believe we can safely chalk this up to Mrs. Frederic using a turn of phrase rather than being fully literal. As previously mentioned, we also finally meet Myka’s dad here, who was referenced numerous times throughout the season, along with Bering & Sons Bookstore, and we get our second actual MacPherson sighting of the season.