Hello, everybody and welcome to the Farnsworth Society, where we, as a group, re-watch television shows that are dreampunk, steampunk, cyberpunk, anypunk-related and meet weekly to discuss each episode one at a time. Our first show is the steampunkalicious Warehouse 13 (it only seems fitting to begin the Farnsworth Society with this show, doesn’t it?). Today, we’re covering the tenth episode, “Breakdown”. And please fill up the comments with your own thoughts, remembrances, favorite things about the episode, absolutely anything. And, yes, spoilers for any other aired episodes from Seasons 1-3 are allowed. We considered making it spoiler-free, but then decided it would likely constrain conversation far too much. Let’s get to it, kids!

For this week’s meeting of the Farnsworth Society, I’m going to do something a little different. “Breakdown,” one of my favorite episodes from the first season, is in many ways also one of Warehouse 13‘s first full-on romps–or at least the Pete/Myka/Claudia plot is–which makes it harder to analyze in the same way I have previous episodes. So, instead, I give you all a list of the 20 top moments and elements that make this episode so fantastic in so many ways, in (mostly) chronological order.

1. Claudia’s voice-command-operated automatic vacuum. It’s not exactly clear whether this is a pure artifact or one of the “old-fangled” bits of tech that Claudia created using jury-rigged artifacts, but either way, this stubborn vacuum cleaner is delightful, particularly in how it seems to toy with Claudia. It’s also neat to see how this pesky little thing sets the entire Warehouse plot in motion, messing with the zipline at the least opportune of moments and thus dumping Claudia into the Escherian original version of Leena’s B&B.

2. The (literally) freezing snowglobe. This episode marks the first appearance of the snowglobe that has the ability to coldify any object as soon as sprinkle its contents over it. At the start, it seems to be a cute throwaway gag (as many of the artifacts are), when Claudia uses it to make her warm soda icy and refreshing again, but it makes an extremely clever appearance at the end of the episode, when it proves to be the key to breaking the otherwise impenetrable hold of the Silly String of Doom. 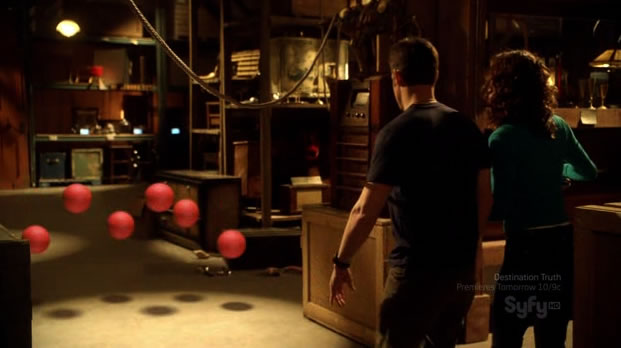 5. The Baylor Dodgeball Sequence. Slightly dodgy (no pun intended) CGI aside, the sequence in which the dodgeballs continue to hit Pete and Myka, multiplying exponentially each time, is wonderful not only because it’s one of the moments in the first season where the show starts to fully live up to the whimsy and wonder promised in the pilot, thus setting the stage for much more geekily joyful humor and whizbang plots in the future, but also because it’s a great opportunity for Eddie McClintock and Joanne Kelley to show off their comedy chops and terrific brother-sister chemistry. I’m particularly fond of that final shot, where Pete’s completely covered by a pile of dodgeballs, only to have them all merge back into a single ball a moment later. It’s also great that Pete figures out the key to putting the kibosh on the bouncy-bounce.

7. The Gooery. This episode also contains our first view of the processing plant where the purple goo that neutralizes the artifacts’ psychic woo-woo-ness when they act up is made and distributed, or as Claudia calls it, the Gooery–yet another example of the sort of whimsical humor that would feature more prominently in Season 2. Also, it’s hard to not love the steampunkiness of it all, not to mention the image of the Silly String getting caught in the gears.

8. The Regents. Meanwhile, over in Artie Land, Artie is meeting Mrs. Frederic at what seems to be an ordinary, innocuous, Small Town USA diner, only to discover that it is actually owned by one of the Regents, who have also filled up the place, posing as customers. This episode is our first indication of who Mrs. Frederic works for her–the power behind the scenes, so to speak–and given how intimidating and powerful Mrs. Frederic is, it really puts into perspective just how badass the Regents are. Mark Sheppard being one of them doesn’t hurt either. What is so nifty about the concept, though, is that they do look like everyday people and, as Sheppard’s character, Valda indicates, in their day-to-day lives, they are. They aren’t immortal and they aren’t world leaders. It’s safer to have the Warehouse in the hands of people who seem “small” and insignificant to the outside observer. I have always loved that the Regents are always so mysterious, like Mrs. Frederic, even while I’m eager to learn at some point just what Regents do on a day-to-day basis, and what responsibilities they have, given that they don’t seem to be out in the field. 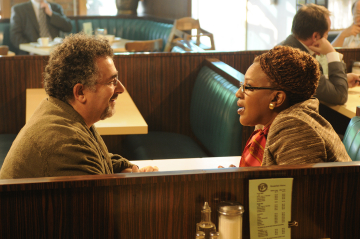 Artie and Mrs. Frederic at the diner

9. The way Mrs. Frederic bites into that piece of pie. This actually might be my favorite Mrs. Frederic moment of the entire series. There is something remarkable about how C.C.H. Pounder makes even something as seemingly nonchalant as biting into a piece of pie speak volumes. You can see her frustrations regarding the situation, her feelings on Artie’s job performance as well as his irritability, and more underneath that perfectly composed exterior. With complete silence, Pounder takes what could have been a completely insignificant moment and manages to reassert Mrs. Frederic’s awesomeness without batting an eyelash. I can’t even with this woman.